A couple of weeks ago I purchased a pair of ECCO Street Premier golf shoes at Nordstrom, which had just received a much-anticipated shipment of what’s arguably the game’s most in-demand footwear.  Made with distressed leather that comes in several color schemes, each shoe’s outsole, or bottom, is studded with 100 small molded nubs, which the company calls “traction bars,” instead of spikes. They’re as comfortable as the sneakers I’ve golfed in for a couple years to spare a bad knee and sore feet.  Moreover, the innovative design provides stability on wet turf, and yet is a hybrid shoe suitable for casual wear in non-golf settings.

With its low profile and studs of "traction bars" instead of spikes, this Sepia-Bison Street Premier is a decidedly new look in golf shoes.

While manufacturers have offered sneaker-like soft-spiked shoes for more than a decade, most were marketed for summertime and seemed to earn only modest consumer acceptance.  Stout enough for year-round play in Northern California, the Street Premier is clearly a breakthrough – – in comfort, style and function.

Freddy Couples wore Premiers at last year’s Masters, which clearly boosted their popularity.  But he doesn’t own Denmark-based ECCO.  He doesn’t earn spare change stitching uppers in Thailand. And since I paid $140 plus tax at Nordstrom, the receipt proves I didn’t steal a pair from Couples’ locker.  And yet, at least a couple dozen jokers can’t help themselves from proclaiming it “Freddy’s Shoe.”

Really. If Couples took Tylenol during a tournament, would Johnson & Johnson have to rebrand it as Freddy’s Pill?

In any event, my attractive pair of brownish “Sepia-Bison” Street Premiers was recently subjected to a sporting Inquisition during five consecutive days of golf in Scottsdale, Fountain Hills and Phoenix.  Because of the tournament format of the ninth annual Xona Resort Suites Media Golf Classic, three of the rounds lasted nearly six hours.  While most of my drives staying on the fairway, there were a few forays into the desert’s sand, gravel and cactus.  But despite all of the time and distance perambulating around Arizona, I came through the week with no discernable pain in my knee and feet, an outcome impossible with regular golf shoes.

Such results are a testament to the new design and the main reason for its popularity with golfers, the vaunted Freddy Effect notwithstanding.

The Street Premier has a myriad of other attributes, starting with the fact that it’s even lighter and more flexible than the shoes I wear for tennis.  It has a Cambrelle lined insole, which is cushy, wicks away moisture in warm climates and holds in heat when it’s cold. But since the insole is removable, the shoe has more than enough volume to accommodate custom orthotics, an essential for any shoe I wear.

The Premier’s traction bars are made of a type of Polyurethane that does an excellent job of absorbing shock, evident while walking on concrete paths and parking lots.  The plastic like material is also said to last five times longer than rubber outsoles.  And the bars do provide traction as good as most soft spikes. 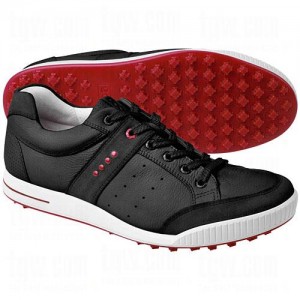 Now, the Premiers do leave waffle-like patterns on damp greens, which I assume do not last long.  And the imprints may cause fewer putting disturbances than marks left by golfers dragging spikes.  The shoes’ colors and profile are decidedly youthful in appearance, with the bottoms in solid blue, red, yellow and green.  And though they’re not as loud and look-at-me as an Ian Poulter, they’ll still put a bounce in an old guy’s step.

ECCO also offers yet another hybrid shoe called the Golf Street Camel Leather, an upgrade from the Street Premier.  Retailing for $160 and featuring uppers made from real camel hide, the shoe is ostensibly more durable than the regular Street and its cowhide. If the Camel Leather not the official shoe of the Dubai Desert Classic, the Danes are missing a real opportunity.

Preferences in golf shoes are, of course, as personal as choices in irons, baseball bats and television shows.  And in real life, the black Street Premiers don’t look quite as sharp as they do in photographs on websites.  (Food featured in the pages of Gourmet always glistens more than what emerges from a home oven.)  The Sepia-Bison model I purchased is a neutral shoe that goes with most clothing, although a splurge on a white pair might come this summer.  The real proof of the shoe’s worth, however, is its comfort, stability and an alternative to spikes that can catch and make a knee that’s as stable as the Greek economy buckle.

Alas, the shoes did not prevent the neuromuscular knot that forms just above my butt from tightening up during and after those five rounds.  So I’m heading out for treatment, where the Doc will take a look and shake his head.  Since he’s a golf fan, I know he can’t help himself from telling me I have a case of “Freddy’s back.”

3 Responses to “The Freddy Shoes”