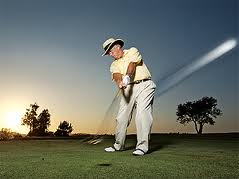 While "the secret" isn't really that easy to execute during a swing, A.J. Bonar stresses that the wrists have a lot has to do with putting pop into shot.

During more than 30 years as golf instructor, A.J. Bonar has primarily resided on the right hemisphere of the human brain, rather than with the majority over on the mechanistic left.  Most teachers start golf lessons with basic guidance on grip, stance, address and posture, and then move onto precise weight shifts, swing planes, shoulder turns and target lines, which can make the golf swing a gyration too complex even for those guys at Cirque du Soleil.  Bonar contends that hitting a golf ball with a club is intuitively easy – – just like many other skills that are hard-wired into human eye-hand coordination through million of years of evolution.

For most of this time only his students had the chance to listen to his theories – – at Bowling Green University, the San Diego Golf Academy and today, at his own AJ Golf School, located at Morgan Run Club & Resort in Rancho Santa Fe, a course that’s a member of the Southern California Golf Association.  Thanks to a ubiquitous 28-and-a-half minute infomercial that ran on The Golf Channel, CNBC and Fox Sports Network several years ago and subsequent spots in which the instructor reveals his “Secret” to hitting golf balls far and straight, Bonar, now is his 60s, is a star.  Touting a videotape and DVD series called “AJ Reveals the Truth About Golf,” the infomercials have made him almost as well known as celebrity instructors David Ledbetter, Butch Harmon and Jim Flick.

“Before the infomercial, about 80 percent of our students came from Orange County or Los Angeles,” explains Jeff Elkind, who is Bonar’s partner in the school.  “Now we’re getting calls from all over the country, and Mexico and Canada, on a daily basis.  A.J. gets stopped in airports, and does radio interviews constantly.  This has really changed his life.”

Today, like many instructors, Bonar is a presence on YouTube, essentially giving away these types of lessons in hopes of attracting business and revenue elsewhere, be it personal instruction or from other products.  It’s a business model that has swept through numerous start-up companies.  And yet, Bonar still sells DVDs, and those and his infomercials are what propelled him into a public figure.

Just six months after its release, more than 80,000 videotape and DVD sets of The Truth – – or 350,000 tapes total were sold for $89.85 apiece.  For most instructionals, 10,000 sets in a year is considered a best-seller.  One of the hottest products in the game that seems to spawn thousands of unusual clubs, training gadgets and other arcane items, Bonar’s initial video at the time outsold all other instructional tapes combined.

In the cluttered and crowded world of golf, this sudden emergence is no small feat.  And it is a testament not only to the power of Bonar’s teaching concepts, but the people behind him.

First and foremost was Elkind, a former marketing and advertising copywriter and longtime friend of Bonar.  “We were having lunch one day while A.J. was still working at Zevo Golf, and I was working at Cobra” recalls Elkind.  “A.J. was musing about his age, his career and a dream of opening his own golf school.  He said he knew the teaching part, but didn’t know anything about marketing.  By the end of lunch, we had a golf school.”

From that very beginning, Elkind had the vision of an infomercial, mainly because of Bonar’s novel story-telling and teaching methods.   But he and Bonar needed both capital and infomercial-making firepower, which meant an equity partner.  Enter the Truth Behind A.J. – – Mike Abram, his brother Steve, and Jimmy Clark, all founding partners of The Golf Agency, an Avila Beach, Ca., company that specializes in golf promotions.

‘I went down to visit A.J. at his school and came away a disciple,” says Abram.  “I’d had a 3.5 handicap index and shortly after working with A.J., I was at a 0.3.  His techniques aren’t like any other, and they clearly work.”

Practically every inventor and schemer in golf believes he or she is just one good infomercial from success and wealth.  Infomercials literally made Barney Adams, Orlimar Golf and several other firms.  Most, however, are more prone to a flop.

“You’ve got to have a credible host, authentic testimonials and a product that works,” explains Abram.  “Golfers sense right away when something is not quite right.”

You’ve also got to have money, because filming isn’t cheap.  Production costs on even the most rank infomercial runs to nearly $100,000, with quality costing $400,000 or more.  But that’s just a start.  “You have to film the video itself, get public relations support lined up, and have a ordering and distribution system ready, all of which almost doubles the initial investment.”  That doesn’t count advertising, in print and on television, the latter of which can up to $30,000 for a half hour on weekends.

The biggest risk, however, is in the production money.  “You can test an infomercial a few times and have a good idea if it’s going to be successful, or if you need to cut the losses.  The rule of thumb is that if you’re selling $2 worth of product for every advertising dollar spent, you’re doing great.  Three-to-one is ridiculously successful.” 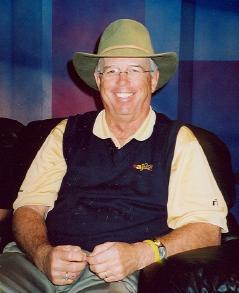 For all of the gimmick products in golf, anything to do with instruction is probably the least risky.  No matter how much golfers grouse about green fees and expensive equipment, they will pay for almost any advice that hints at success, or even temporary relief from the game’s torment.

Revealing A.J. secret isn’t quite like giving away that hanging denouement in The Crying Game, or the chilly ending to The Sixth Sense.  But since he’s charging $89.85, it’s rather unfair to reveal too much here.

It’s enough to simply say that Bonar greatly simplifies the task of hitting the ball squarely.  He also makes it clear that the ball travels best when you strike it with the club, not necessarily with a perfect swing.  He has players tapping into the fluid right sides of their brains, while shutting off the overload of details found on the left.

For all the celebrity, A.J. Bonar still finds his personal center at this golf school.  It is a place that takes no more than four students at a time, irrespective of ability.  At most schools, one rarely sees the instructor whose name is associated with the academy, but instead is taught by other in that teacher’s style.  In Rancho Santa Fe,  students always learn about golf from Bonar, and only Bonar.

This is, quite fundamentally, the truth about A.J.

9 Responses to “The Truth About A.J.”