When I was a kid, possibly the best thing that could ever happen was that we’d go to MacDonald’s– which didn’t even have a drive-thru window in those days– and order dinner and go back outside and eat it in the car.  As an adult, even on the longest road trips, I wouldn’t ever consider eating in the car, except in one situation: if, for example, it were raining (and when isn’t it?) in Portland, Oregon and I had a hankering for a Cuban sandwich or Korean ribs or a Thai pra luck long song, or even a grilled garden burger, from one of the food carts that have sprung up in pods and as lonely outposts in parking lots throughout the Rose City.  Because most of the carts have no seating, let alone an awning or tarp to protect you from the weather, the best option may be to pay the forty cents for street parking and dine in your vehicle.

As someone who’s dined in dozens of countries on many continents, I also have an inviolable rule that I have suspended only so as to be able to eat like royalty for $5 from a trailer that in another life might have been home to wayward hippies, and that is: don’t eat anyplace where they post photos of the food.  It would be my one piece of advice to Portland’s food Carters: lose the blurry photos, perhaps in exchange for further decoration that brings to mind the home country of the cuisine– Buddhas and sanskrit writing, travel posters of Cairo or Venice, and the like. 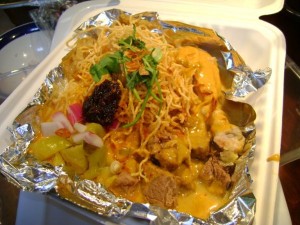 There is something so democratic about eating street food, and Portland furthers this idealism through a wide mix of populace–from street punks with metal faces mashing with suits who just fled the Grand Jury room shuffling politely out of the way of smiling construction workers trailing dust like Pigpen as they line up at the burrito shack.  Moms with strollers.  Strollers with their moms.  Fashionistas with little fascist dogs and burly lumbermen who stepped out of the Portland of 1950 and perform God-only-knows-what kind of work during the day in the middle of downtown.  But they’ve all discovered the food carts– and how could you not, with the of scents ginger, onions, garlic, olive oil, grilling meat and more driving you mad with indecision over pasta carbonara or chile rellenos or a bowl of soup so inviting you’d swim in it given the chance/

This has been Thai week for me, though perhaps there’ll still be time to prostrate myself at the salty crisp altar of the Potato Champion and their twice-fried Belgian sticks of heaven.  With some business to take care of this afternoon as the perfect excuse to head over the river to Southwest Portland, I perused the carts around Second and Washington and opted for Gin, a Thai restaurant in the sort of black metal trailer you’d expect to discover full of rock and roll amplifiers and microphone stands and speakers.  I went with the house specialty– Khao Soi: broad egg noodles in a brawling pink curry sauce with soft tofu, crisp noodles, pickled mustard, fresh shallots, and cilantro.  The flavors were like the Crosby, Stills, Nash, and Young of Thai food, harmonizing so blissfully that I could taste every flavor separately and in all the infinite permutations of them combining in deliciousness.  All under the generous auspices of a squeeze of fresh, tart lime.  I was temped to empty my wallet, just give the rest of the cash to the young woman working the window, or the guy in the back cooking beneath the low ceiling.  Good God!  Five bucks?  Were they kidding?  I’d have paid fifty and felt lucky.

It left only one question in my mind: Where should my traveling Subaru restaurant park itself tomorrow?

One Response to “Putting the Cart Before the Hors d’ oeuvres”