It’s not Pamplona, but running with the sheep at Old Bandon Golf Links may be just as exciting.

The motto of Bandon Dunes Resort in Southern Oregon– my favorite golf resort on the planet– is “Golf as it was meant to be.”  But now a humble, earnest nine-holer just down the road could claim to offer “Golf as it actually was.”  The Old Bandon Golf  Links is the only public course in the US offering rentals of pre-1900 and 1920s equipment, including authentic hand-made gutta percha golf balls.  Anybody serious enough about golf to visit the Bandon Dunes Resort should carve out two hours to play Old Bandon Links.  It’s the golfers version of a writer appreciating that Shakespeare wrote his plays with a sharpened bird feather and a pot of ink on parchment—and all the more remarkable when you try it yourself.

I played Old Bandon last spring with a group of old friends and also with new friend Troy Russell, the mastermind behind the renovation of the course and its embracing of antique golf.  Russell was the Superintendent at Bandon Dunes for ten years; construction supervisor of the award-winning Dan Hixson design at Wine Valley in Washington; assisted on David Kidd’s Tetherow in Central Oregon; and has worked on the crews of ten majors.  The day after he played with us he was actually heading to Augusta to ride mowers at the Masters—and clearly the anticipation affected his play, though not his sense of humor.

Since taking over the course, Russell has repaired the drainage, aerified and enlarged the greens, renovated the old bunkers and added a eight new ones—like the “reverse principal’s nose” (from #16 at the Old Course) which he crafted on the seventh hole, as well as several ravetted bunkers that provided endless entertainment when a member of our group tried to escape from one.  Russell also added new forward and back tees and over-seeded the course with links grasses.  It’s a clean and well-kept escapade.

We played the layout with the 1890 hickory shafted club set.  The driving club, cleek (low iron), mid iron, lofter, and putter all reminded your elbows of what real impact feels like.  The clubs boasted hickory shafts, persimmon heads for the woods, and iron heads for the mashie, mashie niblick and niblick, or lofter.  The clubs were stamped with the name of the maker and gripped with strips of leather.   Sets of replica clubs from the 1920s were also available, but seemed way too modern in comparison.  Standing upon the first tee, Russell warned us that the shafts would torque and that we should keep our swings smooth and short—which made me wonder if that’s why old-time players golfed in coats and ties.

Our round began, between hailstorms, with great hilarity as Portland meteorologist (and A Position contributor) Matt Zaffino attempted to tee off on the first hole with his putter until Russell kindly explained that the longer club was actually the driving stick.  After positioning his “guttie” on a small handful of sand from a wooden box beside the tee, Zaffino absolutely crushed his drive about 160 yards down the middle of the fairway.  My own first shot with the ancient clubs made a beautiful, pure clicking sound, like the tumblers of a bank vault opening to the skills of a talented safecracker—but one who may also hear sirens in the distance.  It traveled about 150 yards.

Thus we embarked upon a somewhat wild journey around the charming course, built in 1927, but lovingly restored and renovated by Russell and his family.  Originally known as Westmost Golf Course, it is still the western most layout in the entire lower 48 and though not directly on the ocean you can hear and smell the nearby surf.  Seemingly short at just over 2,000 yards, it might as well have been 20,000 playing on a windy day with hickory-shafted sticks.  In fact, the par rises from 32 to 36 if you use the old clubs.

The course unfurls in a lowland surrounded by hills and forest.  A ridge to the left of the opening holes, and covered in yellow-flowering gorse, smelled like a pina colada and– with a little imagination– brought the opening holes at Dornoch to mind.  Perky, fast-flowing Johnson Creek comes into play often at Old Bandon—it will swallow a slice on the opening holes, must be crossed twice on the first par three, plays to the right on several returning holes, and fronts the ninth green.  The creek is even more threatening when you consider that the gutta percha balls cost $20 in the pro shop: although they float, you may find yourself capering alongside the fast moving current, as if chasing actual currency as it drifts out of reach.   Green fee packages with the 1890s clubs include three balls, but our group was proof that they might not be enough to finish the nine holes.

If you call the pro shop at Old Bandon Links to ask about the dress code, and Troy Russell answers the phone, he’s likely to tell you that yes, in fact, clothes are required.  His wife, Kim runs the shop while their kids run around it.  It’s clearly a family operation.  Following our visit, the Russell’s sheep dog, Bandit, was headed to school to learn how to manage a small flock, which now resides on the middle holes of the course.

Sit in the clubhouse after your round and enjoy a Bellhaven or Harp’s Lager and have a look at the photos and genuine flags from some of the major’s that Russell worked.  And dream about what golf was like a hundred years ago– still tremendous fun, but much harder! 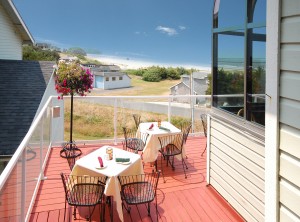 View with a room: the restaurant at The Inn at Face Rock.

If you happen to take about ten steps backward from the first tee at Old Bandon Golf Links you’ll find yourself standing on the property of the newly-renovated Inn at Face Rock.  The rooms at this Best Western sparkle with slate entries, new carpet, flat screen tvs and other amenities.  Non-golfers can enjoy bocce, croquet, an indoor pool, billiards, exercise room, and more.  The hotel offers 74 rooms and suites, some with kitchenettes, balconies, fireplaces, spa tubs, and great ocean views.  A free hot breakfast is served every morning and a fine dining restaurant is open for lunch and dinner.  For folks looking for a different experience than the manly 36-holes-daily, resort experience nearby, Old Bandon Links and the Best Western provide an affordable and unique golf outing unlike any you’ve had before—unless you were playing golf in the 19th century.