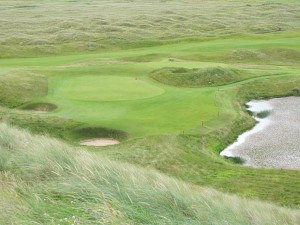 Great downhill par three at Ballyliffin Glashedy. The green was reach by several players who shall remain nameless.

Nearly eleven in the evening here at Rosapenna in northern Ireland and the sun is just setting over the golf course and the round bay beyond my window at the Rosapenna Hotel.  We’ve just finished a fabulous four-course meal in the dining room, met some nice locals at the next table who were eager to trade golfing tales, and now, finally, it’s time to get to work!

A long day for the warriors began in Ballyliffin over the full Irish breakfast, followed by golf on the fantastic and difficult Glashedy Links.  As we approached the ninth green– essentially from the four directions– General Manager John Farren drove up in his truck with a special delivery for Peter Kessler: the brand new set of Adams hybrid irons we’d been waiting for.  The clubs were built by Adams on Monday and shipped to the very remote location for this morning– a tribute to our friends at Adams, who were so thoughtful as to include an umbrella with the set!  Kessler took off the plastic factory wrapping on the driver and proceeded to crush one down the center, to the rest of our dismay.  Peter sends along a giant thank you to Adams golf.  I am withholding comment after losing two matches to Kessler today, and going down three in our lifetime series.  Tomorrow, I’m hitting the Adams clubs! 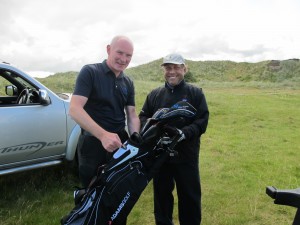 Following a great lunch at the Ballyliffin clubhouse (I recommend the Tandoori chicken washed down with a Guinness) we hit the road, hard, for the two-hour drive to Rosapenna.  Much gorgeous Irish scenery along the way, from high cliffs and granite strewn green fields, rocky brooks, stone ruins, and plenty of chip shops in the small towns. 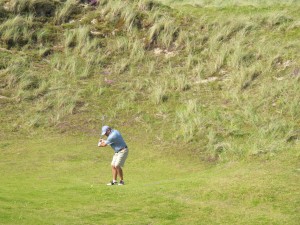 Hal Phillips amid the massive dunes at Rosapenna.

They were waiting for us at the clubhouse at Rosapenna and we teed off on the Sandy Hills Links at just before five in the evening with the weather delivering an extra pleasure and the boys in shorts.  Cigars were lit, balls flew, and occasionally some found the fairways and greens, though there was much tramping through the gorse on one of the toughest courses any of us have ever played.  Some hysteria ensued, such as when Tom and Hal, both lying something like fifteen in the fairway, haggled over whether one of them had hit the other’s ball.

Highlights of the day included two shots struck by Hal Phillips that hit the pin– one on the par-three fourteenth at Ballyliffin that gave us all a chill, although the ball bounded eighteen inches away leaving him with a birdie rather than buying drinks.  But the afternoon shot, hit from the fairway about 150 from the hole dunked in and stayed for an eagle.

Clouds swirled and shifted, sunbreaks warmed us, and we carried on despite aching backs and bruised egos to play the full course and finish at nine, fifteen minutes before the dining room closed.

Tomorrow calls for an even earlier start for a 7:00 a.m. breakfast and the drive to Narin & Portnoo for the morning round.  More soon!