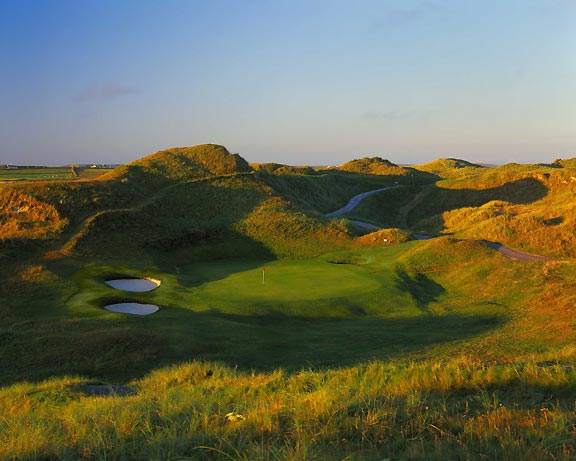 Welcome to the modern era, where—armed with a TEP wifi device and a Canon G11 camera) I can post several stories onto the golf road warriors website from the backseat of our VW Transporter while Peter Kessler snores beside me in the back seat and Hal Phillips and Tom Harack argue about directions up front.

We’re on our way from the outpost of Carne Golf Links via a five hour drive to Killarney, where we’ll meet up with a group of other journalists for an organized five-day press trip around the Irish Open.

We arrived at Carne this morning from Enniscrone after a ninety minute drive  to find fog and light mist, muted colors, dripping eaves, and a general pall in the atmosphere.  We pulled on our waterproofs and went to the first tee which overlooked a fairway disappearing into distant dunes and mist like something out of a tale of knights and ancient battles.  Our modern battle was a skins game that greatly deteriorated later in the round, along with the weather and the state of our nerves.  The only real color came from wildflowers growing brightly in the rough—purple heather, tiny yellow and blue flowers, ivory hued  Burnet roses, thyme, primroses, and more,  but you really don’t get a chance to appreciate their beauty because if you’re in the flowers you have more important things to worry about, such as finding your way back to a fairway someplace nearby.

Carne is quite generous off the tees, especially compared to some of the other venues we’ve sampled this week.  Eddie Hackett crafted the layout on the grounds of a former racetrack.  Although the current course was opened in 1993, the Bellmullett golf club which calls the course home was founded in 1925.  And which sounds as much like the name of a haircut as a golf club.

That first wide welcoming strip received our drives with great hospitality but offered little in the way of a look at the actual green still a solid mid-iron away.

During our round at Carne we were also field testing a set of Adams hybrid irons that had been made to Peter Kessler’s specifications but since Peter’s injury earlier in the trip, the rest of us were now competing for a chance to use a variety of the Adams clubs.  I’m not making this up when I say that on the second hole I hit the driver off the tee and following a very pleasant CRACK I watched my ball launch itself aggressively down the fairway.  On the second shot I pulled out the Adams hybrid six for a shot of 165 yards uphill into a slight wind, heard a similar Kaboom, and watched my Titleist fly toward the pin like a kid running happily out of the classroom on the last day of school, and stopping about eighteen feet from the hole.  Needless to say, I won the skin.

As I did on the next hole as well.

The holes at Carne, in general, were good solid fun without the wow factor we experienced the previous day at Enniscrone.  It occurred to me today that if author Frank Herbert had been a golfer he may have set his famous sci-fi novel Dune at Enniscrone, because they’ve got some of the biggest dunes I’ve seen on the planet.

On the eleventh hole the routing at Carne turned outward to where we could first hear the ocean and see distant breakers way out beyond the dunes.  The  hole played about 330 yards and required a tee shot delivered through a passage between two giant sandhills followed by a second shot hit high in the air to a welcoming platform green.

Toward the end of our round wind and rain and fatigue won out and we staggered through the final holes thinking about seafood chowder, which was in our near futures.