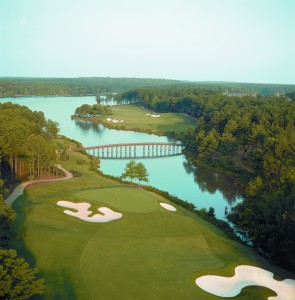 I played with fellow warrior Brian McCallen who was fresh off an emergency visit to the Reynolds Golf Academy in the middle of the night; entertaining golf professional Mark Lammi; and an old friend I’d never met before– Mark Barnes, of GRW sponsor and long-time supporter of freelance journalism everywhere, PerryGolf, one of the world’s great golf travel companies.  If Barnes can use his hands as powerfully and effectively in the office as he does on the grip end of a golf club he must always have an efficiently organized and perfectly executed workflow.  Except maybe with an occasional file flared accidentally via a slice into the coffee room– but from where he probably would be able to fire said file right back at his desk for whatever the office equivalent of a par might be.  Lammi, Vice President of Golf Operations for Reynolds, was obviously afraid that if he played to his ability his boss might think he’d actually golfed more than once or twice this year, so he hit a few balls purposely into the trees and various other places of great interest  while spinning a few stories and making every possible effort to avoid uttering any cliches, as I’d challenged him on the first tee.  He also offered one of the best comments I’ve heard on a golf course in a long time.  Our group of journalists tends to play a bit slowly given that we’re entertaining and interviewing clients and other dignitaries, taking notes for our stories, handling emergencies via phone, email, and text, and still trying to focus every once in a while on executing a decent golf shot.  At one point after we’d lost sight of the group in front of us by a full hole, Brian McCallen heard a strange call from the woods and asked what kind of bird it was.  Without hesitating, Lammi said, “Oh, that’s one of our pace-of-play crows.  They caw whenever a group starts falling behind.”

The Oconee Course plays along the shores of Lake Oconee and through scenic woodlands camouflaging some attractive lakeside “cottages” if cottages can exceed several thousand square feet of gorgeous craftsman-style architecture.  Reese himself said of the layout, “The topography is such that the green sites are natural, the finishing holes on both nines are spectacular.  Streams and various other features such as man-made lakes incorporate the challenge into the design . . . ”  Not the best grammar, necessarily, but very good golf architecture.

The Warriors found Oconee to be very solid and reliable in a slightly conservative way, like a well-dressed banker.  Many holes on the front side excelled with a sense of pure craftsmanship, like Stickley furniture.  The layout opens with a long par five of 579 yards in a scythe shape and playing toward directional bunkers before bending to the left toward a lakeside green.  Number five was a favorite on the front side, a 188-yard par three that corners over water and a strangely-shaped bunker, with brown pine straw and green pines as backdrop.  Number eight was an equally good one-shotter at 218 yards to a platform green begging to be approached via the bunt driver shot that I invented and have since honed to perfection, much to the derision of my usual playing partners, who often pay for that derision with ten dollars of “Nassau’s currency.”

On the back side, number twelve is the kind of short par four you want to play every single day– unless, of course, you play it the way I did by missing the green by a foot and rolling back into a rock-lined creek.  The creek bisects the hole in its entirety but there’s a bailout left where you can avoid trouble if you don’t care about getting anywhere close to the pin.  Thirteen presents another formidable long par three over a veritable riot of bunkers.  And just what is the real term for a collection of bunkers– we have a gaggle of geese, a murder of crows, a business of ferrets, a bale of turtles . . .  how about an ohshit of bunkers?

I went out in 39 today but began to erode on the back side.  On number sixteen I attempted a truly dumb approach from off in the pine straw over a creek about 180 yards and succeeded where I shouldn’t have– but it was a rare performance highlight on the nine, though there were plenty of design highlights.

Brian McCallen uttered a wholly original phrase by calling Mark Barnes Daniel Boone after he hit out of the woods on seventeen and made a rather startling par, but then McCallen counteracted his achievement by actually saying out loud that even his bad golf game was better than a day in the office– possibly the worse offense possible when striving to play a cliche-free round.

The terrific series of finishing holes at Oconee was nearly equalled by the quality of the Angus burger in the Linger Longer steakhouse in the clubhouse, associated with the Ritz Carlton Hotel.  Click here to read about our afternoon at the Reynolds Golf Academy and The Kingdom . . . a golf Fantasyland of club fitting, skills challenges, instruction, and teacher Charlie King presiding over the whole thing like some benevolent golf dictator.