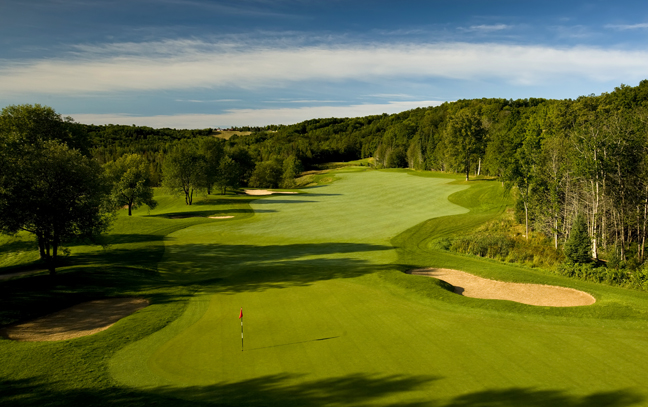 On every golf trip where you play a collection of courses there’s always one you’re not looking forward to as much– whether because of reputation or what you’ve been told about it by a friend (who may have just played badly that day), or because it just doesn’t have the cachet of the other layouts in your rota.

So when the Golf Road Warriors woke on the day we were scheduled to play The Tribute at The Otsego Golf Club, just a few miles from our home base at Treetops Resort, the mood was a bit muted.  We sipped our coffee at breakfast as if the day ahead was filled with meetings.  Kessler barely even finished his egg sandwich.  Bedell only consumed a single order of the banana French toast.  Maybe our funk was due to the fact that we’d be playing a track designed by Gary Koch and Rick Robbins rather than by Rees Jones, Tom Fazio, or Rick Smith.  We hadn’t heard of the designers and so felt free to roll our eyes and imagine the worst.

Yet the moment we arrived at The Otsego Club and Resort and were greeted by two energetic girls who loaded our bags onto carts, and we walked into the gorgeously rustic clubhouse, we knew we were on to something.  Founded as a private ski club in 1939, the property proffers the feeling of a deep leather couch that you can just fall comfortably back into (which, in fact, we did later, after a fine lunch in the dining room).

And then we saw the golf course itself, a sprawling beauty luxuriating across 1,100 acres of Sturgeon River Valley terrain unimpeded by houses or cell towers or virtually any  signs of humans other than our golf balls flying against the horizon and the occasional moan issued by Brian McCallen following the flight of his tee shots.  We soon began to get an idea of how good the day ahead was going to be.

The Golf Road Warriors played the course from the white tees at a somewhat short 6,256 yards, but the wind certainly made it play longer.  If we could offer a single recommendation for improvement, it would be to add a set of combo tees, as the blue tees– at 6,733– would certainly have proven much too long for us on this day.  At any rate, we enjoyed the challenges from the whites and played a fine match that was decided by the final putt on 18, when an unexpectedly steady Tom Bedell sunk a five-footer for the win.

After a couple of extremely scenic opening holes that were, well, quite open, the course turned truly interesting.  We were somewhat befuddled by number four, a steep downhill par-five conundrum of 450 yards that offered two fairways: a lower and wider one to the right, a narrow upper route to the left.  What we didn’t know was that if you hit it as long as Tom Bedell does, and went right, you’d punch right through the fairway into steep, difficult rough.  Peter Kessler and I both chose the left route and had shots at the green in two– but mine was with a three-wood whereas his required an eight iron.  I hit a stinger that disappeared for a long time as it flew over rough downhill toward the mostly unseen putting surface, then reappeared at the low end, leaving me with a lag of about 2,000 yards.  Kessler stubbed his eight iron and the ball also vanished temporarily before suddenly materializing in the center of the green and rolling to pin high.  Somehow we both ended up with fives.

The par-five seventh also stood out– on the third shot of this 535-yard epic, the fairway narrowed and pinched and curved toward a green guarded by a lake to the left.  Faced with that approach you realize that the hole is all about positioning on the second shot–though you’ve already hit yours.  The entire world seemed to tilt toward the hazard on the final approach. 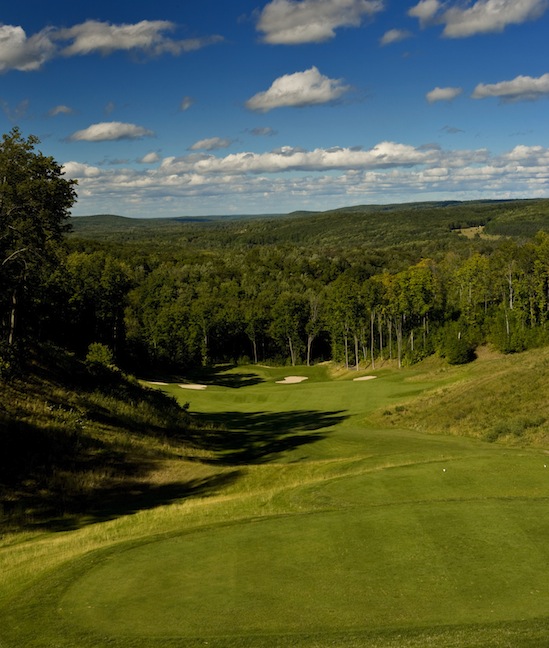 You can see for miles and miles. But can you nail this downhill approach?

Our Otsego forest journey continued as we played across ravines and ridges, enjoyed 30-mile views of the surrounding wooded countryside, and negotiated clever challenges like the par-three ninth, requiring a five-wood hit to a green with an extra shelf that was on this day home to the pin.  The par threes in general were strong and varied, ranging from 126 to 202 yards.  The course closed with a short uphill par four with the pin set on a green that was mostly invisible, at least from where we were all approaching it from, and guarded by bunkers at the front and back and some tightly-mown chipping areas, which created a bit of havoc prior to Bedell closing out the match with his last putt.