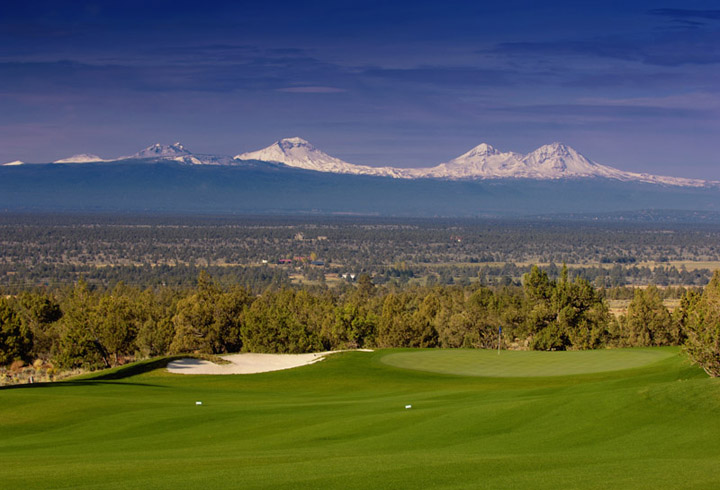 The golf road warriors arrived in Powell Butte  yesterday for a preview round and warm up on Brasada Ranch’s Canyons Course, a fine Peter Jacobsen/Jim Hardy-designed layout rolling through sage and juniper at the base of Oregon’s Cascade Mountains.  Eleven holes play in or through canyons—lending a private and wild feel—and seven perch atop ridges, offering expansive views.  Tight, demanding short-game areas surround hard, fast greens.  The architects used hazards to define the best lines of play and incorporated a few pin positions that may send you over the edge—literally.  Great holes include the short risk/reward conundrum of dogleg-left number five, where, like Moses, you must decide how much desert wilderness to cross while avoiding a fairway bunker in setting up a short uphill approach.  Number 15, a potentially driveable par four across a canyon, with distracting bunkering, is also quite strong.  A variety of tees (many elevated) allow Canyons to provide both the longest and shortest routings in Central Oregon.  Don’t forget that you’re at over 3,200 feet of altitude, so if you happen to hit a golf ball in the air it will travel about 10% farther.

Even before our round began, arguments– some might call them discussions– commenced immediately regarding which tees to play.  We deferred to Tom Bedell, our eldest member, and agreed to play from the gold tees at a distance of just over 6,000 yards, in part because our PGA Professional member wouldn’t be arriving until tomorrow.  There’s much discussion lately about tee selection, especially as it relates to speed of play.  But a better point might be how, at the 292-yard fifteenth hole, two of us mid-handicappers were able to drive the green on the risk-reward puzzle– as it was designed.  Against all odds videographer David Whyte and myself both struck perfect tee shots aimed over a cluster of bunkers.  The balls bounded left and bounced toward the pin, his landing twenty feet from it on the green, mine perched on the fringe.  What could possibly be more fun that that?  And yes, we both ended up with birdies.  We played quickly, in the company of herds of jackrabbits, and hardly saw another golfer as the shadows lengthened and the day cooled. 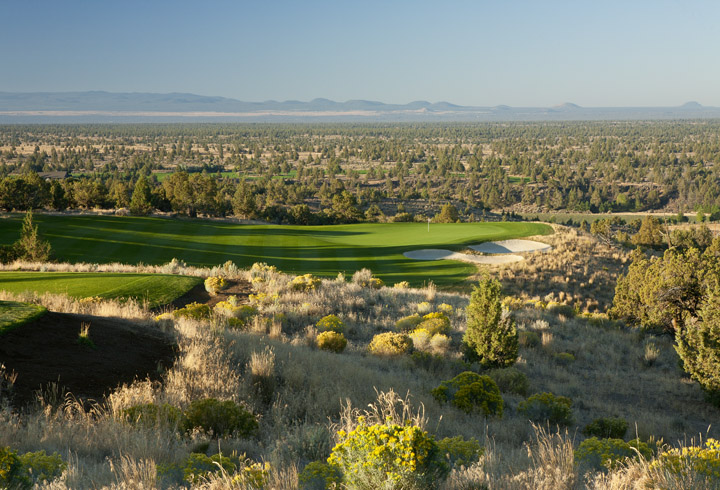 This morning, joined by fellow warrior and world speed golf champion Christopher Smith, we a took step back to the black tees and while the 6,600 yards wasn’t in itself too daunting, the 140 slope rating raised Bedell and my eyebrows.  Today on number fifteen– where birdies were celebrated just a day previously– mayhem ensued as the green was no longer marginally reachable by mere mortals like us, although professional Smith left himself an eagle putt.

En route around Brasada today, Smith provided a 15-second short game lesson that corrected a flaw I’ve seen several golf pros about in the past, and which has ballooned my handicap because I haven’t been able to hit a short pitch or chip without hosel-rocketing the ball sideways.  Christopher took the briefest of looks at my set-up and provided the key to short game happiness: close the club face a bit and move the hands back at address.  I was reborn.  Which is why I’ll make it my mission to always travel with an affable and competent pro from here on.

Despite an impressive 39 on the first day (with a double bogey on the last), stepping farther back did nothing to impact my score, which was the same both days.  In fact, some holes were easier even with occasional forced carries now in play: site lines were clearer, fairways were in may cases more welcoming and impossible to drive through into the rough, and approach distances seemed on may occasions more personable.  Our conclusion about tee selection is that decent players should try both the gold and black sets, or a combination, to experience everything the course has to serve up.

Brasada’s most powerful charm may be the quiet of the property, situated on the outskirts of Redmond but proferring views of a gaggle of snow-capped Cascade peaks.  And the stars at night: off the star charts.  As was a festive dinner at The Range restaurant in the company of local advertising and pr wizard Justin Yax and his wife Kristen.

Although born as a real estate development, new owners have transformed Brasada into one of the most original and well-concepted resorts in the Northwest.  As a member of Preferred Golf it joins a collection of 99 other of the world’s finest golf destinations, including Pebble Beach, Pinehurst and Gleneagles.  It features ranch-style appointments such as guest rooms upstairs in the large ranch house, cabins, eco-friendly design elements, and extensive athletic, spa, and other facilities that exude secluded luxury without being over the top.