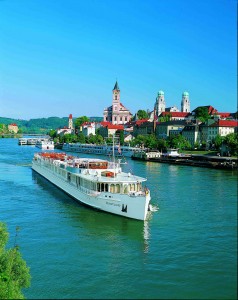 One of the great dilemmas of golf travel is how to take on a collection of sometimes widely dispersed golf venues in an interesting foreign locale, visit the region’s cultural attractions, and also travel in a relaxed manner between them without becoming more tired during your vacation than you were before you set out. In Europe, Kalos Golf Cruises—a North Carolina Company—provides an answer: leave the traveling part to them while you’re dining on delectable International cuisine, ogling 14th-century architecture, and sleeping. Kalos currently operates eight European golf itineraries—including trips in the British Isles, Italy, Spain, and a handful of other European countries— from some of the nicest boats you’ve ever seen.

Actually, the word “ship” might be more appropriate for these floating five-star hotels replete with fitness centers, libraries, formal dining rooms, and luxurious cabins. But do not confuse vessels such as the River Cloud and Sea Cloud with city-sized cruise ships. These intimate mobile hostelries all accommodate fewer than 100 lucky guests. On some itineraries (the British Isles and the Mediterranean, e.g.) passengers live on deluxe ocean-going clipper ships. On trips down such celebrated European rivers as the Danube and the Rhine, the mode of travel is on upscale river barges built of brass, teak, and rosewood in the style of classic small ships from the 1930s. 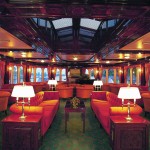 One of the best features of Kalos cruises is the daily itinerary left on your bed during the multi course dinner served in the dining room while rich European scenery floats past. Enjoy castles with your canapés, a dash of parks with the pinot noir, perhaps a soupcon of steeples from medieval churches with the soufflé. Then, after a digestif in the lounge or on the breezy upper deck, return to your room to savor tomorrow’s menu, which will include descriptions of the next golf course and cultural tour, a schedule, and perhaps a page describing the best Austrian pastries to search out during your free time.

Speaking of food, cruises have earned a reputation for over-stuffing passengers every few hours with massed plates of delicacies. While Kalos is no different—offering three gigundo meals plus two interim “snacks” (I cannot imagine that a single passenger made it to the 10:30 evening snack), food is not the main focus. These trips draw a more active crowd who play golf and tour all day (there is, after all, no pool to laze around, though you could certainly read a trashy book on the sundeck). On our trip many passengers used free time to speed-walk and jog around the deck (10 laps = 1 mile) as a means of justifying a crème brulee at lunch AND a piece of famous Sacher Torte following a hearty dinner.

Nights on board were comfortable as the boat swished upriver, occasionally stopping to pass through locks. But we were so tired from our active days that we never woke to observe the process.

Despite the strong attractions of the food, accommodations, and informative side tours through some of Europe’s coolest cities (not to mention the friendly, impeccable staff), Kalos is pretty serious about its golf. During our Danube River journey we were able to play six rounds on the twelve-day itinerary—just enough to satisfy most of the golfers but also leave time to see things other than fairways (or rough, depending on your game).

The golf menu was as varied as the cuisine. We played in three countries—Hungary, Austria, and Germany. While expectations of the well-golfed American crowd were modest, most of us were surprised at the quality of everything from course conditioning to design to service.

We played our inaugural round at Pannonia Golf and Country Club outside Budapest—one of only a handful of courses in the entire country. Designed by Canadian architect Doug Carrick and Austrian Hans Georg Erhardt on the former grounds of a Habsburg dynasty weekend retreat from the mid-19th century, Pannonia is reached down a lane bordered by 200-year-old trees. The historic clubhouse was originally the stables. The 6811-yard course, which hosted the 2002 Hungarian Open, features wide fairways routing through rolling hills, large greens, and sublime bunkering. The cleverly architected layout is also well maintained. While our Kalos golfers tore up (both metaphorically and, in some cases, literally) the fairways at Pannonia, our spouses attacked the artist’s colony of Szentendre—an island full of museums, galleries, shops, and cafes— with equal energy.

Our appetites for golf were well whetted— following a day of touring— by the time we visited the Fontana Golf Club, another Carrick/Erhardt design outside Vienna. This modern 7079-yard real estate development built around a 20-acre lake features plenty of hazards of both the watery and sandy varieties, as well as a collection of risk/reward opportunities. Pods of bunkers, including no shortage of Scottish pot bunkers, mine the devilish green complexes. 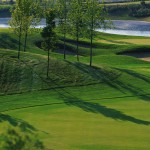 Although many of the carries to the humpy, tiered greens are easier than they look, tight chipping areas around the putting surfaces penalize missed approaches. And although golfers are given the chance to bail out from more difficult shots en route to most of these greens, said bailing often results in very tough next shots. Twelve holes on the course provide opportunities to hear the German word for “splash.” While golfers did battle with Fontana, touring passengers took fewer risks but reaped equal rewards on their visit to the posh Schonbrunn Palace, which encompasses imperial rooms from the Habsburg family. They also attended a daunting strudel demonstration.

Following a second night docked in Vienna, we set out for Golf Club Schloss Schonborn, an old-style venue laid out in a forest on the grounds of a 300-year-old castle. The tight, tree-lined fairways— routed through former gardens—recall classic U.S. courses from the 1920s. Stretching to 6536 yards and a par of 73 due to an extra par five on the back side, Schonborn makes for an easy-going walk in flatlands and low hills. Highlights include a clubhouse located inside the original building, a tee box set against the backdrop of the former orangerie, and the eleventh hole—a par three aimed right at the charmingly aged yellow walls, red roof, and green shutters of a palace wing.

Following golf we still had enough time upon returning to the ship to walk through the lovely old-world town of Durnstein. The more adventurous among us climbed 520 feet above the river up to a fortress where Richard the Lion-Hearted of England was held prisoner back in 1193.

The next day we visited the famous Melk Abbey, one of the finest baroque buildings in the world, on our way through the Wachau Valley, a particularly lovely and historic part of Austria. Sometime that evening, while we ate, drank, and/or slept, the boat crossed into Germany. 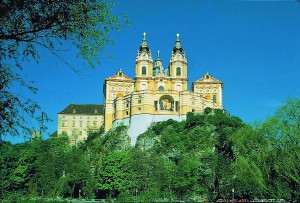 Our first German golf destination was the Bernhard Langer-designed Brunnwies Golf Club, one of six courses comprising the excellent Hartl Golf Resort in Bad Griesbach. Langer’s 6,596-yard track plays to a par of 70 with three par threes on the front side. The course has been ranked among the top 20 courses in Europe and #1 in Germany. Among Kalos patrons it also ranked first for great bear and chewy pretzels. Brunnwies’s wide fairways contour nicely through the Bavarian countryside but are toughened by tilting lies, bunkers scattered in landing areas, and vertical hazards (trees) that golfers must shape their shots around. Holes route through wheat and corn fields and climb up among fir trees overlooking surrounding countryside. Those Kalos patrons who eschewed golf (and so didn’t chew pretzels) enjoyed a half-day walking tour of Passau, including an organ concert at St. Stephen’s Cathedral, which boasts the largest church organ in Europe.

We cruised downriver that evening like a lay-up to set us up for a short ride to Sinzing am Minoritenhof in Regensburg the next morning. The front nine of this classically designed course routes through hilly Bavarian forest. The back nine meanders alongside the Danube, which serves as an unarguable OB marker. The course plays to 6,705 yards with many greens fronted by deflecting slopes which discourage run ups and force you to hit the ball to the pins. Those who passed on golf were lucky enough to tour the town of Regensburg, which has been untouched by war since Napoleon’s invasion. The atmospheric German town also boasts the oldest sausage restaurant in the nation—which many golfers were sad to miss. 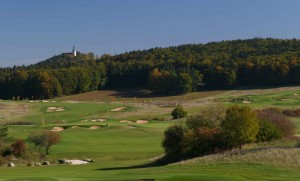 Our final day of golf took us to the Graham Marsh designed Golf am Habsberg in Velburg, Germany, which is highly ranked among all European courses. Large bentgrass greens surrounded by short-mown collection areas team with plentiful deep bunkers (78 in all) set in hilly terrain to force short game artistry. Wind only adds to the challenge. The final day of touring took our non-golfing comrades through the town of Nuremberg, where they visited the parade grounds, imperial castle, and the Congress Hall Court where the famous war crimes trials were held.

On our last evening, we enjoyed a farewell dinner in a cozy German restaurant on the outskirts of Nuremberg. With regret, we spent the night in a landlocked hotel, already pining for the gentle, sleep-inducing motion of the River Cloud. In Greek, the word Kalos means “deep and enriching beauty.” In the arena of golf cruises it also means the finest of everything from golf to cuisine to tours to service. For further information call 919-942-3464 or visit www.KalosGolf.com.