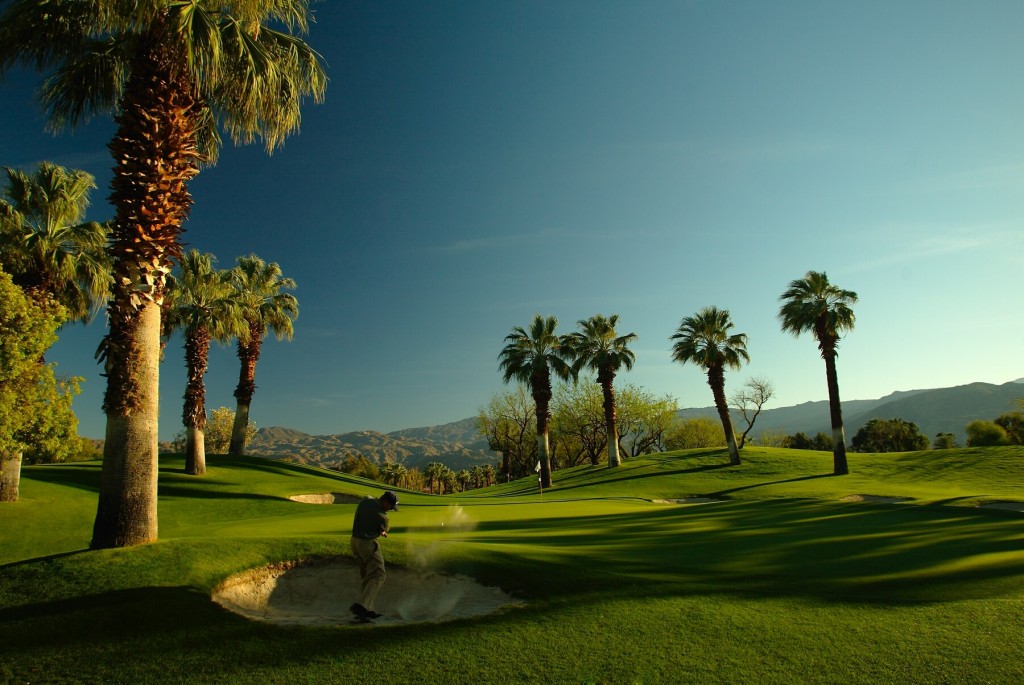 The desert is hot and full of sharp things like cacti, yuccas, pyramids, scorpions, and Las Vegas.  But it’s also home to some of the most beautiful and well-crafted golf courses on the planet—which isn’t to say that these won’t poke or bite you, as well.  Following are nine of my favorite places to seek green oases and the shimmering mirage of par.

West of Tel Aviv on the shores of the Mediterranean, lies Caesarea Golf Club, Israel’s only 18-hole course.  Designed in 1961, the layout has been resurrected recently by Pete Dye.  The new course stretches to a nearly biblical 7,400 yards and playa through ancient Roman and Byzantine ruins.  The renovation included installation of salt-tolerant paspalum grass, new bunkers, elevation changes, and other features that will help to redefine the term, “hole-y land.”

At Shadow Ridge Golf Club, in Palm Springs, architect Nick Faldo sought to recreate the flavor of great Australian Sand Belt courses.  He crafted generous fairways protected by bold, steep-lipped bunkering, all with a perky accent.  Faldo says, “I wanted a golf course that not only looks different from all the other courses in the desert, but which plays differently.  I sought to design a course that not only tests a player’s skill, but also his imagination and character.”  Golf.marriott-vacations.com.

No pair of golf layouts defines desert target golf better than the 36 holes at Troon North, in Scottsdale.  The Pinnacle and Monument Courses— both designed by Tom Weiskopf— demand laser accuracy to islands of fluffy grass surrounded by seas of desert dangers such as rocks, cacti, arroyos, waste areas, and more.  Both courses were recently renovated and reconfigured to improve walkability.  Troonnorthgolf.com.

In Rabat, Morocco, Robert Trent Jones designed 45 holes at the Royal Dar es Salaam golf complex in 1971.  The name means “house of peace,” but playing the Red course from the back tees will suggest a different moniker: house of pain.  The muscular venue routes through cork and oak forest, mimosas, bougainvillea, palm, ficus, and banana trees.  It’s been designated as the toughest course on the European tour.  Royaldaressalam.com.

At the Palmilla Resort, in Los Cabos, Jack Nicklaus designed three golf nines that are all tens, incorporating ocean, desert, and mountains into holes with an unbelievable fright quotient and daunting carries from the back tees.  Many of the bright green fairways are defined by golden arroyos.  Deep, wide chasms dare you to be a hero but may leave you bleating like a sheep.  Oneandonlyresorts.com.

If your notion of deserts includes lots of sand, you’ll find exactly that at Quicksand Golf Course, a short camel ride from the airport in San Angelo, Texas.  The Hurdzan/Fry track provides an opportunity off every tee box to drive into the sand, though you might not be so quick getting back out.  Thegolfcourses.net.

The Westin Mission Hills resort, outside Palm Springs, is home to the Gary Player Course, which GOLF Magazine called “difficult, well-designed, and joyful.”  The 7,062-yard delight of stonework, waterfalls, receptive greens, lovely humps, and strategic bunkering is as elegant as Gary himself.  The fifteenth hole includes an island green surrounded not by water, but sand.  Westin.com/missionhills.

Nines that are Tens

Sixteen miles from Manzanillo, Mexico, Robert Von Hagge’s three nines at Isla Navidad Golf Club provide 27 reasons to play through this Chihuahuan Desert oasis.  The Lagoon, Mountain, and Ocean layouts combine classic golf course architecture with classic Mexican architectural features such as niches with hand-made folk art and stained glass doors and windows in the clubhouse and on houses around the course.  Islanavidad.com.