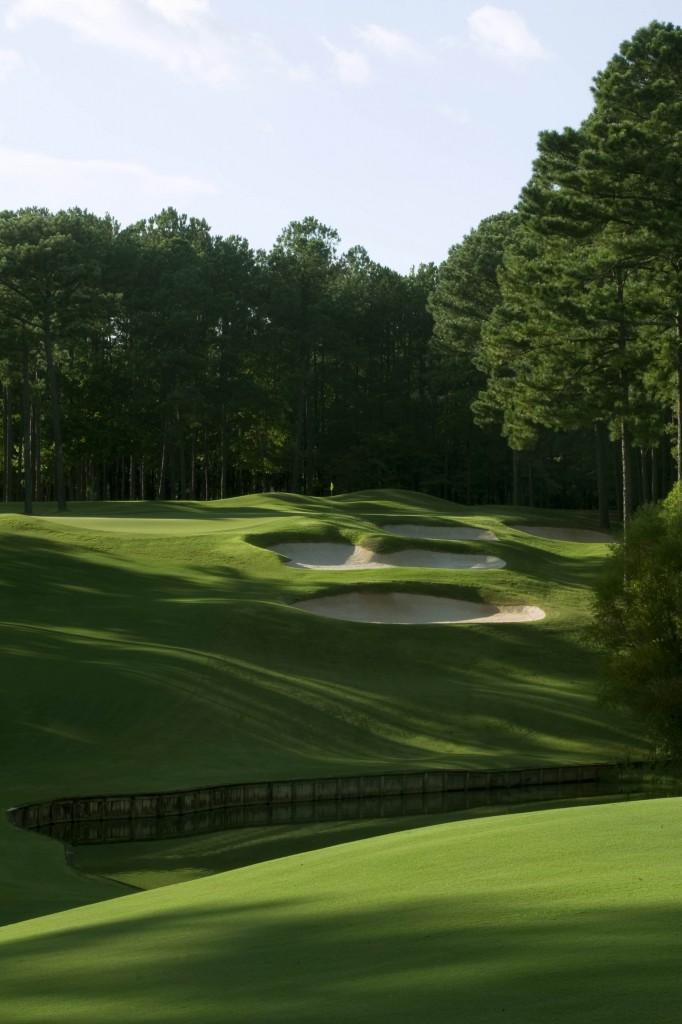 Your cup may runneth over at Bob Cupp’s The Landing Golf Course, at Reynolds Plantation.  But before we even talk about the golf, let me just point out that the Planatation has put three exclamation points on service!!!  Which is to say that when a server or assistant pro or bartender tells y’all to have a good day, they say it as if they actually mean it, which is a welcome respite from the robotic service we’ve experienced at so many other fine resorts.

The Landing, originally designed as the Fort Armour Golf Club, tends to win your affection in the long run like the girl who’s smart and funny and beautiful with glasses, rather than lighting a passionate flame from the beginning based on pure flash.  The course starts out modestly with a couple of doughty holes that get better looking the closer you get to the greens.  Number one sets a trend for the day by presenting a wide and somewhat bland fairway that plays to a green hidden by the slope and undulations in the long ramp leading up to it.  Bunkers stack up to the left of the invisible putting surface, and I had no trouble seeing those, especially as my ball splashed in the sand in the shade of a tall tree.  The second hole is also open off the tee then turns just to the right and runs downhill in such a way that you can’t see a water hazard that presses in from the right to cross in front of the putting surface– a recurring theme here that may disappoint first-time players until you remember that this is mostly a club course played by members who probably all fell for it the first time around.  Number three begins to suggest that drama awaits, with a distant view of Lake Oconee, which then provides the talent for the next couple of holes.  The fifth hole is a beautiful confusion– a short par four that makes you question your club off the tee.  Whatever you hit, you’ll have a difficult approach to a green guarded by bunkers and a steep slope to the right and acres of lake water to the left.  Everything runs down hard toward the lake, so you need to hit it the way videographer David Whyte did– flair it out forty yards right of the target and let the slope run it down to twelve feet from the pin.  Like so many of the holes here, this one will prove much better upon further acquaintance.

The Landing shows off a noticeable upgrade on the back nine with a long par four starter followed by one of the best holes you’ll encounter all day– a 201-yard uphill par three calling for a perfect bunt driver hit toward the rear of the green so that it will trickle back down toward the pin.  Twelve is also strong, though strong players risk hitting it through the fairway off the tee.  Gorgeous almond-shaped bunkers filled with red sand stairstep up short and left of the platform green.  Oddly, though, the hole features bunkers with both the wispy white sand prevalent on the front side and coarser red sand which looks better and is more satisfying to hit out of.

Despite the fact that my nemesis, Peter Kessler, finished par, birdie, the two closing holes ratchet up the drama and are to my mind among the best here.  Seventeen plays 183 scenic yards to a well-bunkered green set in the trees.  Eighteen is a mid-length par four with the second shot over water to a shallow green fronted by bunkers.

Overall, The Landing is not unlike Sybil, though it has slightly fewer personalities, but presents a challenging day of golf with some great shot demands, drama, hidden twists such as unseen hazards awaiting at the bottom of blind downhill tee shots, and no shortage of scenic beauty. 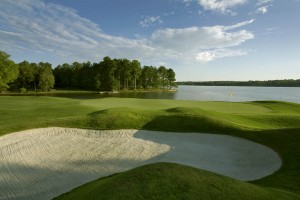 The Golf Road Warriors consider it a well-positioned “lay-up course” for the other five courses that await at Reynolds Plantation.

I’m sad to report that my effort to play a cliche-free round ended on the sixth hole, when I accidentally told fellow warrior Brian McCallen that there was still some meat left on the bone of one of his putts.  Stay tuned tomorrow for more on my campaign to eliminate cliches from golf.