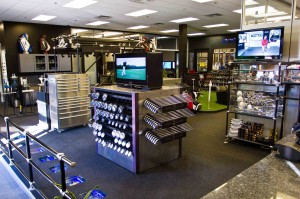 I’ve been through several custom club fittings from a variety of golf club manufacturers over the years, and though I long believed that technology was irrelevant to the bad golf swing, I’ve changed my tune.  And with a swing like mine, I should know.  Each fitting actually resulted in a drop of several strokes in my handicap– from a 14 to an 11, and then from 11 to a single digit.  I don’t believe this life-long goal would have been achievable for me without untold hours on the practice range (as well as a full swing rebuild) if it wasn’t for adjustable club heads designed to help me hit a draw, perimeter-weighted cavity-backs that helped me launch with a higher ball flight, and hybrids that are so easy to hit that sometimes I don’t even have to take them out of my bag to execute a great shot.  And of course a matchmaking club fitter  able to fix me up with the right clubs for my particular swing and physical abilities.

The drawback of the fittings I went through was that they were all run by a specific manufacturer who was only fitting me for their clubs.

Yesterday’s Golf Road Warriors visit to Cool Clubs in Scottsdale was not just eye-opening (and actually fun) but has won me over to their concept that clubfitters, like judges, serve their constituencies best when they are non-partisan.  Which is another way of saying that if there’s a golf club manufactured virtually anywhere that might make me a better player, Cool Clubs can not only recommend it but also build it to my own specs by ordering a combination of shafts and heads and grips and adjusting them to the best lie and loft, etc.  And by best that means best for me.  My hour-long session with fitter, PGA Professional,  and Cool Clubs Scottsdale Store Manager Jerod Wallace was a combination physics lab, golf lesson, and meditation on what it really takes to be good at golf.  And the first thing it takes is the right clubs.  Having an endless variety to choose from increases greatly the likelihood that a fitter can help find the best match.

Because of time constraints we were only able to run through the fitting for a driver and a putter.  Jarod started by having me hit my own driver under the watchful eye of Trackman, which measured my total yardage, launch angle, spin rate, angle of attack, and other factors.  In response to the hard, cold numbers he pulled various shafts and heads together to see whether we could improve upon the results.  We spent some time talking about my swing characteristics and ended up with a shaft not available on the open market which he suggested I get in a half-inch shorter length coupled with a head from a manufacturer who’d clubs I hadn’t used before, and which was designed to increase loft, lower spin, and had a deeper sweet spot.

If I’d been fit for an entire set Cool Clubs would frequency match, pure, and spine all my irons to perfect consistency and even order the set with exactly the specs chosen for me.  Then they’d set assemble it on the premises and ship it out.  Marketing Director Vito Berlingeri walked us through where every step of this process would occur with strict oversight, and showed us how every tech who touched my clubs would have to initial my order and report exactly what function he performed.

The second half of my visit with Jarod was a putter fitting that was actually more like a lesson than a fitting.  He videotaped my putting stroke and then drew lines on the computer screen to show me that despite reasonable success with the flat stick while playing, my stroke suffered from several flaws that if addressed might actually take a couple of numbers off my handicap.  The videos clearly showed that at address my putter face began three degrees open and 1/2 ball toward the toe.  At impact, though, the ball had shifted a full ball toward the heel.  My back path started outside three degrees, rotated to eight degrees open, and finished at twelve degrees closed.  In a word, inefficient and hard to make consistent (okay, that’s a few words).  In another word: awful.

Wallace worked with me to discover that a mallet putter helped me aim more directly at the target because of its extended aiming line.  Then he placed obstacles in my swing path to ensure that I began the putter back on an inside path and greatly shortened the backswing.  We discovered that TaylorMade’s Ghost Putter in the mallet version was a very good match for me.  Even better: I already have one in the golf dungeon back home.

Which reinforced another finding from fellow Golf Road Warrior Tom Harack, who learned through his fitting that his current clubs are actually a very good match for his swing.  His fitter told him that if it was worth $400-$500 he could probably get him another two or three yards off the tee.  Which is to say: his emphasis was on fitting Tom well rather than selling him clubs.

With a fitting studio that looks like a NASA installation and a dedicated team of fitters who know the entire panoply of manufacturers’ wares well enough to immediately narrow club choices down based on personal swing characteristics and other individual factors, Cool Clubs is miles (but measured in yards, of course) ahead of fitters who represent a single brand or even those who work in golf shops that carry a limited selection.

An indoor fitting costs $525 and an outdoor fitting at a local practice range costs $750.  The process takes somewhere between 5-7 hours, and customers can come back to the fitting studio for additional work if the fit isn’t perfect the first time.  Cool Clubs currently has nine locations including three in the Scottsdale area, two in Japan, and four others scattered throughout the US.  Consider yourself lucky if you live in one of these locales.

Friends of mine who are taking up golf or getting serious about the game often ask me what kind of clubs they should buy– which is like when my wife asks me what shoes she should wear: with an endless number of choices there’s just no right answer.  Which is why I tell anyone who’s even thinking of buying golf clubs that they need to go for a custom fitting.  A girl wouldn’t buy shoes off the rack without trying them on, for Godsakes, and golf clubs are even more complicated to fit well– even if my wife might disagree.

And I’m now further convinced that anyone getting custom fit for golf clubs should consult experts such as the ones at Cool Clubs who can find a solution for your specific golf challenges from a limitless number of options.