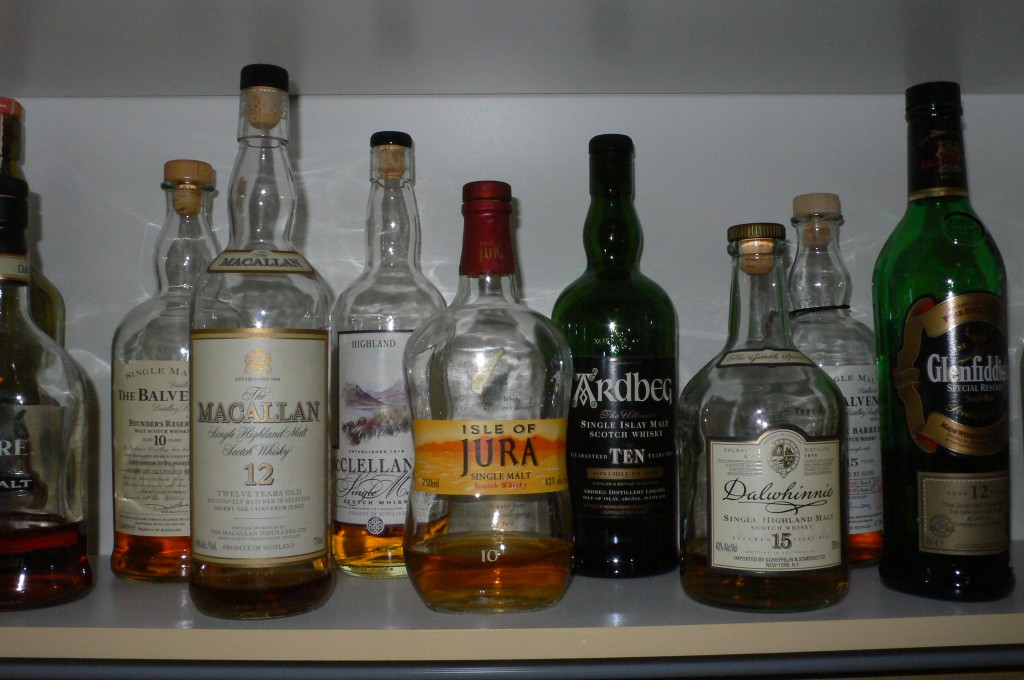 Not Pictured: My Lagavulin 16 and Balvenie 21 Port Wood, Hidden in an Undisclosed Location.

Surely it’s more than mere happenstance that the game of golf and the drinkable artwork that is Scotch whisky were both created in the gorgeously green, wind-swept, salty-aired duneslands of Scotland.

Although the origins of golf are slightly shrouded in mist, many believe the game was invented as early as the 14th century by fishermen returning from beach to village across rolling links.  If one fisherman hit a stone with a flat stick, surely his friend would have tried to hit another stone even farther.  In the ensuing 700 years, the Royal and Ancient game has collected a few more rules but achieved an impressively global reach.

Scotch has an equally uncertain history (and an equally wide range).  The word “whisky” boasts Gaelic roots and a meaning akin to “water of life.” Scotch whisky was most likely first distilled by farmers from local barley long before it became fashionable with royalty and aristocrats in the 15th century.   Is it mere coincidence that Scotch gained in status almost precisely when golf began to catch on?  We think not!  Neither is it an accident that a bottle of scotch contains 18 shots—one for every hole on a golf course.

Today, the convergence of golf and Scotch creates an experience that is cool, fresh, rugged, outdoorsy, and just downright fun.  And each feels perfectly natural—particularly when paired with the other— amidst the topography of the Pacific Northwest.  What, really, can match the smooth, taste and amber liquidity of a fine Highland single malt sipped in the clubhouse of, say, one of the planet’s best links golf courses, located on the southern Oregon Coast?  What else can convey the mellow nostalgia brought on by a dreamy elixir aged for 18 years in sherry casks and enjoyed after (or during) a challenging 18 (or 36) holes in a freshening breeze?  Light up a spicy Dominican cigar to accompany the Scotch and golf for a truly unparalleled triumvirate.

Whether you believe that golfers began distilling Scotch as the perfect accompaniment to their brisk, purposeful walks along the North Sea, or that Scotch drinkers created the merriment of golf during whisky-inspired perambulations, today the two fit together like, well, hand and golf glove.

More than 100 distinctive distilleries punctuate Scotland’s whisky region, which stretches 280 miles from the Orkney Islands to the Southern Lowlands.  In the Eastern Highlands, Speyside’s Macallan distillery has been producing award-winning Scotches for nearly two centuries.  The Macallan features a deep, rich, smooth, rounded taste with a slight sweetness.  Refined palates may recognize honey notes.  The Macallan recalls the pure water of the River Spey, fields of heather, the granite filters of the Grampian Mountains, and the sea. Whether you’re enjoying an eight-year-old from Macallan’s newer Fine Oak Range, a 60-year-old fine and rare distilled in the 1920s, or the extremely popular 18-year-old aged in sherry oak, The Macallan delivers the warm, welcoming hospitality—even in rain or chill winds—of Scotland.  Just like golf.