The only golf course in Israel has just undergone a renovation by an American master. The result is heavenly.

In Israel, there is no escaping history.

The Old City of Jerusalem and the skyscrapers of Tel Aviv; the Dome of the Rock, Wailing Wall, and little town of Bethlehem; Jericho, Nazareth, Gethsemane, Galilee; intersections of cultures, religions, and bloodlines; battles recent and ancient, hopes for peace ever in the air.

Steeped in history but somewhat off most tourist maps is Caesarea, about an hour north of Tel Aviv, nestled peacefully along the Mediterranean. Today it is a city of fewer than 5,000, but 2,000 years ago it was one of the world’s busiest ports and home to 100,000. 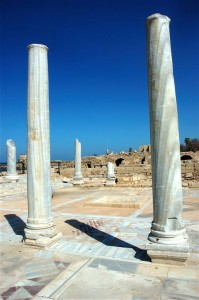 Caesarea was built by King Herod, who wanted to rival Alexandria for commerce and reflect the glory that was Rome. His engineers laid out a harbor, amphitheater, circus for chariot races, and aqueduct for bringing in fresh water, as well as temples, houses, and baths. When Rome fell, Caesarea slipped into decline and changed hands with the tides. In the 11th century, it was conquered by the Crusaders, who later lost it to the Mamluks. For a few centuries, it was farmland. In the late 1800s, Muslims from Bosnia settled a small village on the ancient site; they left in 1948 during the war that established the state of Israel. The land was then turned over to a non-profit foundation, established by the Rothschild family and the government, with the intent of creating a safe and beautiful place to live, work, and enjoy.

In 1961, another kind of history was made in Caesarea with the opening of Israel’s first golf course. The story goes that the sandy soil reminded James de Rothschild, an avid golfer, of Scotland. Among those responsible for creating the Caesarea Golf Club was Abba Eban, who would later serve as Israel’s foreign minister; having been born in South Africa and educated in England, he was one of the few people in the young country to have actually ever played the game.

The course was designed (unimaginatively, most people say) by one Fred Smith, about whom little else is known. Supposedly Henry Cotton submitted a redesign plan in 1967, but it was never implemented. Worst of all, at some point fertilizer mistakenly containing kikuyu seeds was spread on the Bermuda grass fairways; the kikuyu quickly killed off the Bermuda and took over, making the course hard to maintain and play.

“The course was totally lacking in strategy, the kikuyu grass caused the ball to bounce back toward the player, and the irrigation system was inefficient—water is very important in Israel,” says Richard Wax, a golf consultant from England who first played at Caesarea 40 years ago, while volunteering with the Israeli Army as a surveyor during the Six-Day War.

And yet the 500 club members—many of them well-to-do and retired to the quiet village by the sea—loved their course despite its ball-eating surfaces, an overgrowth of trees and bushes creeping into play, and dull routing. Like golfers everywhere, they didn’t see any reason to change.

But the Caesarea Development Company did. The operations arm of the foundation, the CDC relies on income to keep the wheels turning. Income that comes from tourism, investment, and home sales, all of which would be helped by the golf course if it were better, more noteworthy, a reason to visit. 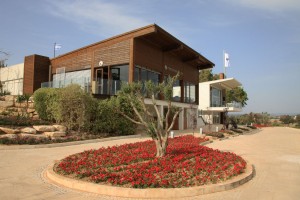 A number of architects were invited to offer plans for redoing the course. The finalists were three of the star names—Nicklaus, Norman, and Dye—which proves that while the Israelis don’t have much of a golf history to fall back on, they’d done their homework and knew that it would be easier to sell real estate around a course from a noted designer. The nod went to Dye and his associate, Tim Liddy. It was Pete’s first trip to Israel.

“Caesarea was as quiet as any place I’ve ever been,” the 83-year-old architect remembers. “The old course was nothing but the area was great. It’s the first course I’ve ever built on pure sand, so it has a seaside look even though it’s about half a mile from the sea. There’s great substructure for the greens, and because we built on sand, the work went very quickly.”

The members were told the course would be closed for two years. Knowing how things go in Israel—a columnist in the New York Times recently described it as “a country held together by argument”—everyone assumed it would take five years. The renovation was completed in a little over 18 months, and officially opened this past July. Getting the course ready was important so it could host the 2009 Maccabiah Games, a quadrennial Olympics-like competition for Jewish athletes from around the world.

In this land of ever-present history, Dye was very aware that he was creating some of his own, that the first “real” 18-hole course in the country would be critical to introducing the game to a nation of neophytes.

What the country got is a great test for any player. Forget the usual Dye trickery—there are no island greens, wood planks, or other sideshow acts. But there is plenty of strategy, with a premium placed on thinking, whether determining which side of the fairway yields the best angle to the green, or then mastering those greens, many of which are slightly elevated and subtly sloping. Very cleverly (consider how often you actually encounter this on other courses), no matter how good or bad the player is, he or she probably will use every club in the bag.

Take the first three holes. Number one plays from an elevated tee into a left-to-right turning fairway: The golfer can easily see what lies ahead, including a big tree on the right side that forces drives to the left. But even after a misdirected drive it’s possible to punch under the tree—the only one of more than 1,000 on the course purposefully in play—and reach the green. The second hole bends the other way, encouraging, rather than necessitating, a draw. Now warmed up, the third hole is a long, wide-open par-five just begging for a big swing. 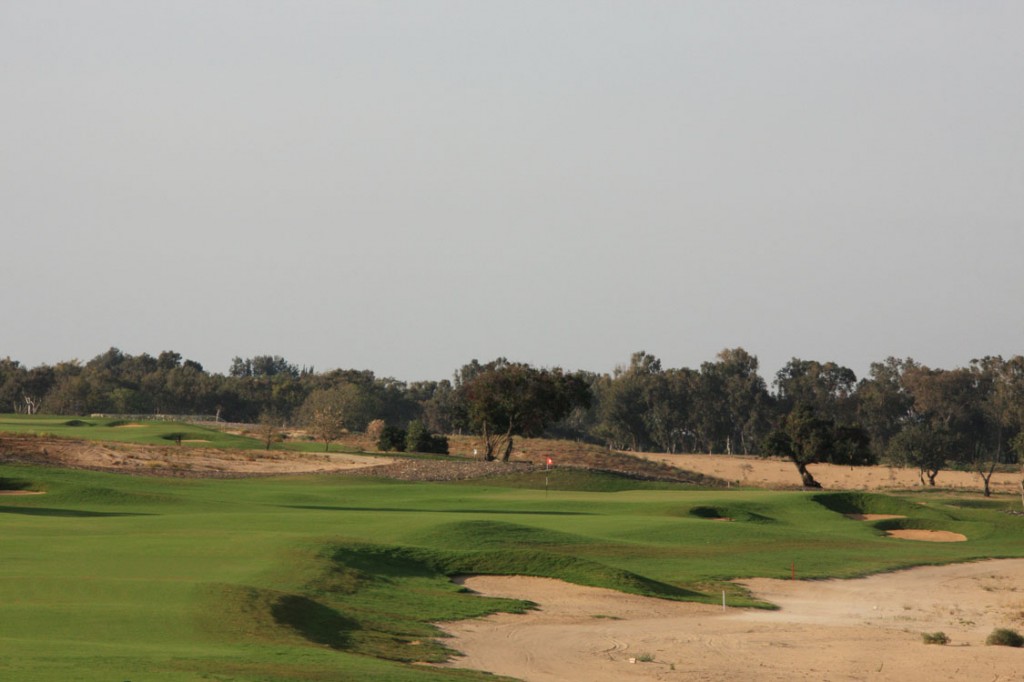 Playing on, holes gently rise and fall. Most are lined with sandy waste areas and dry river beds (wadis) with most of the dense vegetation that choked the old course cleaned out; native flowering shrubs and other low-lying plants are growing in, adding color and definition. But this is not “desert golf” of the Arizona variety: no cacti, no rattlesnakes, and no hopping from green pod to green pod.

The final hole (photo, top) is a long, uphill par-four that feels a little like the last at Riviera in Los Angeles, with the clubhouse perched above the green. Just a little because it isn’t nearly so high above the green, and the Caesarea clubhouse—only slightly modified from the original—looks like a stack of shoeboxes, not a Moorish castle. But the hole plays dead into the prevailing wind coming off the Mediterranean, so getting home in two is a worthy accomplishment.

All is not perfect, of course. Two ponds on the back nine—there for storage rather than beauty—could look more natural and less distracting. And many of the bunkers are blandly shaped as well as oddly angled and sited away from the greens. This might become one of those Dye courses that Pete tinkers with from time to time, especially as more accomplished players report back with their opinions.

(If Dye does go back, he might want to see something more of Israel. He claims his previous trips were almost all work and no play. But he did see desalination plants—“they interest me”—and a little bit of Jerusalem, where he was fascinated by water of a different kind: “How did they get the infrastructure into those old buildings? I was looking at what had once been nothing but a sand pile and kept wondering how they got the toilets to flush.”) 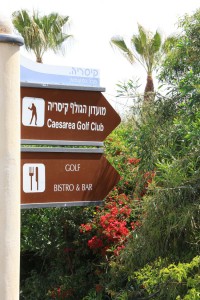 Infrastructure is less of an issue at the club, largely run by an eager and earnest group of Israelis who are learning on the job. The exception is pro Andy Santos, an American from outside San Francisco, who came to the old Caesarea course 13 years ago. Besides being the in-house golf authority during the early stages of planning, Santos has been something of a Pied Piper, creating junior programs for different age groups, training a golf team (which takes a few international trips each year to see how they stack up against the competition), and teaching children from nearby immigrant villages. Santos and his assistants (some local, some imported) also give regular “etiquette-awareness” classes, instructing even the old-timers in comportment: No one is allowed onto the course until they’ve completed one of these 18-hole playing lessons.

The guest fee is 460 shekels (approximately £70 or $115), the pro shop is well-stocked with new rental clubs, and there’s a big practice area (with movable canopies, very important in the sun and heat) as well as a par-three course that will see a lot of use as golf’s siren song attracts new victims.

With only about 1,500 golfers in a country of more than 7 million, the future of golf in Israel should be bright. More courses are necessary, but even the most steadfast of developers have been worn down by the country’s bureaucracy and climate of regulation. Still, Jewish clubs are well-known and well-established throughout Britain and the United States, and golf is well-known to attract tourists and those looking for another home. So expect Israel to find yet another way to “make the desert bloom.”

This article originally appeared in the October/November 2009 issue of Golf International. Photographs courtesy of Iain Lowe.