This is sure to be a very interesting year for Nike Golf. The company’s lead spokesperson is on hiatus, and if anyone inside the company knows when he’ll be back on Tour, they’re not saying.

Meanwhile, somewhat lost in the ballyhoo is a strong lineup of new clubs, with more offerings for a wider variety of player.

Since Nike’s founding in 1972, the company mantra has been “athletes first.” The runners, swimmers, kickers, dunkers, smashers, and golfers who use Nike products guide the company in many ways, notably with input on new products. In golf, this means that the likes of Lucas Glover, Justin Leonard, Suzann Pettersen, Paul Casey, Anthony Kim, Michelle Wie, and Tiger have contributed much more than just their two cents. The result is the Victory Red (or “VR”) line, which is being marketed as the better player’s club and already is in the bags of nearly all Team Nike’s pros. 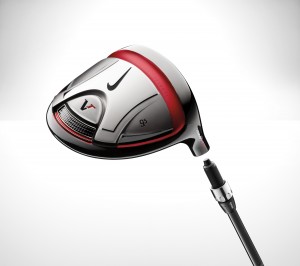 The most notable feature of the new VR Tour drivers (available in an adjustable STR8-FIT—shown left—or non-adjustable version) is the “compression channel,” a groove cut into the sole that runs parallel to the clubface. The channel allows the face to compress at impact, producing higher ball speeds, and also helps produce a lower ball flight, something better players want—especially those really talented ones who make big money hitting a “stinger” off the tee.

“The Compression Channel technology takes the rigidity out of the sole and provides more flex in the heel,” says Tom Stites, Director of Club Creation for Nike Golf. “By adding this technology, we have made the VR drivers more forgiving for the better players when they miss it in the lower zone of the heel.”

The STR8-FIT driver can be adjusted to 32 different face-angle settings; the non-adjustable version is slightly smaller and has a more traditional pear shape. According to my sources, Team Nike is about evenly split between the adjustable and single-setting models.

Matching VR Fairway Woods are adjustable; hybrids are single position. The VR drivers cost $399, the fairway woods $249, and the hybrids $169. A new promotion, called “signing bonus,” gives buyers credit for up to $200 in Nike goods with specific club purchases; ask about it at your favorite shop. 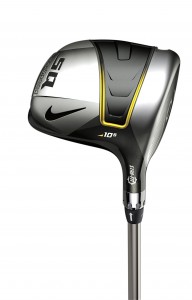 Nike “makes no apologies to the average golfer about Victory Red,” I was told. In other words, if you’re not good enough, don’t screw yourself by playing the wrong clubs. The right clubs from Nike for most players would be those labeled SQ Machspeed.

The SQ Machspeed STR8-FIT driver (right) is the latest iteration of Nike’s distinctive square-head technology. Modifications to the head’s shape and the sole are designed to improve aerodynamics so the club moves faster during the swing. A “speed slot” and indentations in the sole change how the club cuts through the air: Wind-tunnel testing showed a reduction in drag (wind resistance) of 30%; Justin Leonard, speaking golf rather than physics, says he’s hitting his drives 10 yards longer. (Leonard is the notable Nike pro using the SQ driver rather than VR.) 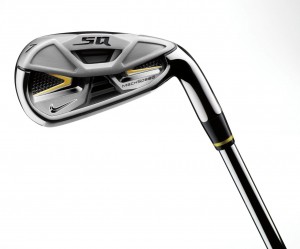 New Machspeed irons (left) are also for the majority of golfers and represent what designer Stites has been trying to do with game-improvement clubs for years. In fact, they were described to me as Slingshot irons—Nike’s original game improvers—“on steroids.” A deeper center of gravity puts more mass lower in the club, where most of us actually make contact, while the steel material and method of construction create a thin, hot face. There’s lots of bragging about this being the fastest Nike iron ever, and fast means long. A set of eight clubs (4-iron through approach wedge) goes for $699 with steel shafts, $799 for graphite. The Slingshot irons are now $499 for steel, $599 for graphite (those sets include seven irons and one hybrid).

All Nike pros are playing one of the VR iron lines. All the more reason the rest of us should take a good look at the SQ Machspeed. For much more information on Nike equipment, check out their website.