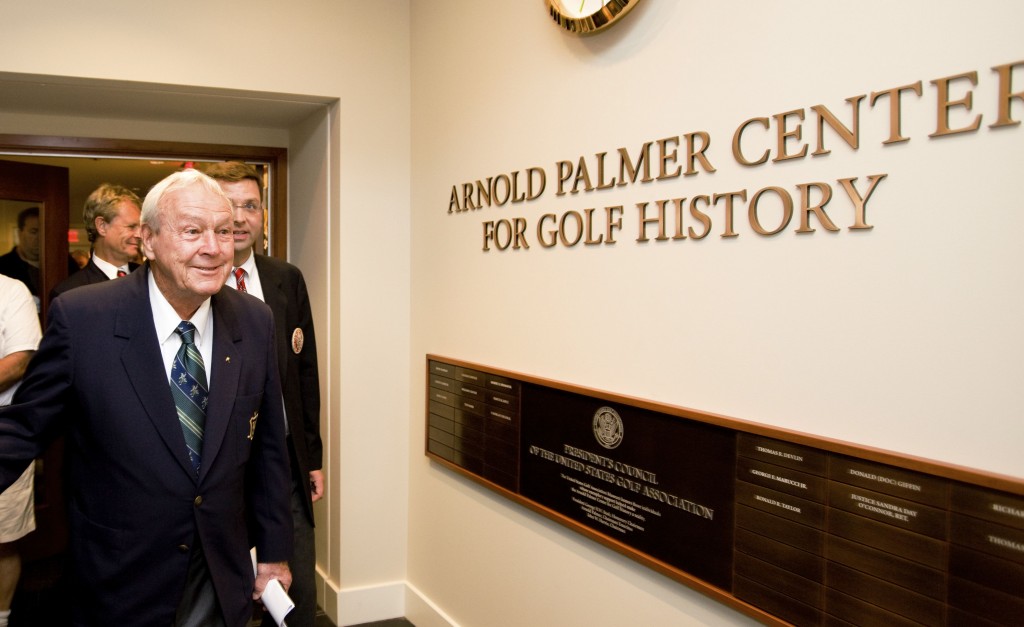 On June 3rd, 2008, the USGA—and golf in America—finally got the museum they deserve. That’s the day the 15,000-square-foot Arnold Palmer Center for Golf History opened in Far Hills, New Jersey, 45 miles west of midtown Manhattan. Besides nearly doubling the size of the USGA’s exhibition space and the number of items on display, this new gallery changes the way the story of American golf has been told and the ability of golf fans to get up close and personal with the game they love.

This new home has been a long time coming. Since the first USGA Museum opened in 1936 (making it the oldest sports museum in the United States—three years older than the Baseball Hall of Fame at Cooperstown), it’s been something less than an association priority. Begun with clubs, artifacts, and books largely donated by past champions including Bob Jones, Francis Ouimet, and Glenna Collett Vare, its original home was some shelf space in the organization’s office in New York City. Whenever the USGA moved, the ever-growing collection moved with it—filling the first floor of a Manhattan brownstone in the 1960s, then the first floor of the John Russell Pope-designed mansion in Far Hills, and finally both floors of the Pope House, where it’s sat, barely visited, since 1986.

Now, after three years in storage and construction of the new wing (as well as total refurbishment of the 80-year-old Pope mansion), the collection is on view as never before. More than 2,000 artifacts—most of them never on display before—fill the exhibit space with many more accessible to visitors through the all-new research center. 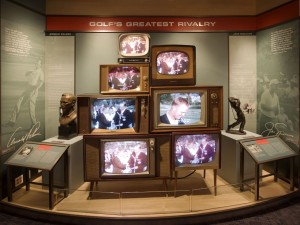 But just as important as the new facility is the emphasis on telling the story of American golf from a new perspective.

“In the old museum, the displays showed the history of golf from its origins in Scotland,” says Rand Jerris, director since 2002. “We said it was to the present, but it really kind of ended in 1950. People were always asking, ‘Where’s Tiger Woods, where’s Phil Mickelson?’” The story was told through the evolution of equipment, “so the galleries were the feather-ball room, the gutta-percha room, the rubber-ball room. Today, people want personal stories that have more meaning for them.”

The new exhibits take a three-pronged look at the game, focusing on players and their stories, on the USGA championships, and on how golf intersects with America’s national identity.

Players get the most attention, beginning in the first gallery, dedicated to the new wing’s namesake, Arnold Palmer. Why Arnold? “His position as an American icon sets him apart from everyone else who ever played the game,” says Jerris. “People loved him. Everybody thought they had a personal relationship with him.” The first major item visitors encounter is a giant portrait of Palmer comprised of quotes said by and about him; etched in glass panels with quotes illuminated, it is a fitting tribute as well as notice that the rest of the museum will be full of surprises. 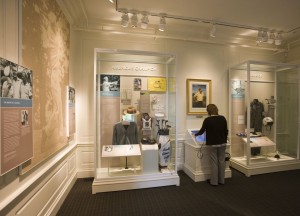 The Palmer exhibit flows into the grand rotunda, the building’s signature architectural space. There sit the 13 original trophies of the organization’s championships, as well as plaques that list, year-by-year, every winner of a USGA event since the first in 1895. There is also, for the first time, a computerized database (also accessible online) of every championship, searchable by event, player, year, and host site, with records, summaries, and full-field results.

The remaining exhibits tell the game’s story, mixing political and cultural history with the great personalities. The timeline is segmented into six eras, each in its own gallery highlighted by a short introductory video, hundreds of artifacts, and the designation of an “iconic moment” that captures the themes and primary stories of the period.

First is the “Dawn of American Golf,” from the earliest days to just before World War One. The iconic moment is Ouimet’s victory in the 1913 U.S. Open, which for Jerris is the key event in golf’s American adventure: “Look at the changes that were going on in society in the years immediately preceding World War One. America is asserting its presence on the world scene; it is becoming a world power, a world economic power, a world military power. Ouimet’s victory was viewed by the popular press not as a 20-year-old kid beating two professionals but as America defeating Great Britain.” 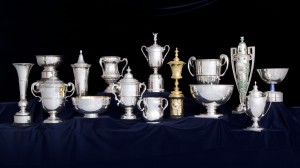 Gallery two covers the 1920s, the “Golden Age” of sports in America, and the iconic moment is Bob Jones winning the Grand Slam. In gallery three, the “Depression and World War Two” looks at the democratization of golf through the New Deal and the war, with the Depression as the key moment. Gallery four revisits the “Comeback Age,” the great boom after the war, highlighted by Ben Hogan at the 1950 U.S. Open and Babe Zaharias at the 1954 Women’s Open, two victors who came back from great physical adversity to rise to the top. (“Think about all the American soldiers returning home with war wounds, physically disabled, and you understand why these championships were so important,” says Jerris. “It’s so obvious when you say it, but no one has written about it that way.”)

In gallery five, the “Age of the Superpowers” covers the 1960s, a time of great rivalries: Muhammad Ali-Joe Frazier; Wilt Chamberlain-Bill Russell; Arnold Palmer-Jack Nicklaus. The iconic moments are the 1960 and ’62 U.S. Opens, which pitted Palmer and Nicklaus head-to-head and proved that they were the best of their generation. Their duels are set against the backdrop of another rivalry, the Cold War, and the turmoil that lasted for three decades.

The final gallery is “The Global Game,” which picks up after the fall of the Berlin Wall and examines the globalization of golf. “In the last ten years, we’ve had our first USGA champion from Italy, our first from South America,” says Jerris. “The last five U.S. Open winners have come from the Southern Hemisphere, which is amazing to think about.” The iconic moment is Tiger Woods’ victory in the 2000 Open.

Coming out of the last gallery, visitors are at the doorway to the new research center, where everyone is invited to dig deeper. “If you saw something in the displays that intrigues you,” says Jerris, “come into the library. If you love Francis Ouimet’s story, we’ll put his autobiography in your hands and you can read his own words. If you are fascinated by long-nose woods, we’ll go into the basement and bring up a box of them for you to look at.

“The museum is designed to function on many levels. You can walk through the building in half an hour and leave with the complete story of golf. Or you can spend three hours reading every word, then stop in the research center and read for another three hours.” 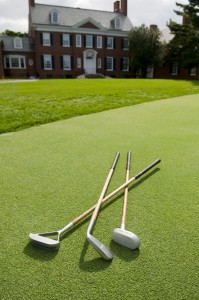 The new museum is just the tip of the strategic iceberg as the USGA tries to make golf history more interesting and exciting to fans and non-fans alike. There’s a dedicated website, and re-energized outreach programs—traveling exhibits and publishing and educational programs. There are plans to get America combing its attics and basements for undiscovered golf memorabilia. A new gift shop will feature books, videos, and products based on the artifacts on display.

And just out the museum’s back door is a 16,000-square-foot putting green—loosely fashioned after the Himalayas in St. Andrews, Scotland—that allows visitors to experience golf history for themselves. “Talk about interactivity,” Jerris says with a laugh. “We’re going to have replica balls from every era and we’ll lend you a long-nose putter and let you try it. Or you’ve just seen Bob Jones’ famous Calamity Jane putter, now go putt with a replica. Or putt a feathery and see how well it rolls and what it meant that Old Tom Morris shot an 82 with that.”

A new building, new exhibits, a new look at golf’s history—after 70 years, the USGA Museum is finally as exciting as the game itself. But give the last word to Arnold Palmer, whose love of golf has been an inspiration for the museum from day one.

“Early on, Arnold wrote a letter that will be the first thing people will see when they enter,” says Jerris. “As a young kid, he said he learned a lot about the history of the game and he felt that made him a better player. He enjoyed the game more, he had a richer experience. That’s the message we’re trying to get out, that’s why someone should come here.”

An edited version of this story originally appeared in the USGA’s championship programs of 2008.