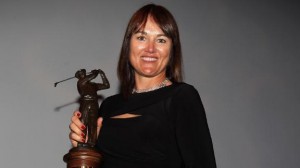 No matter what else happens in golf this year, one of the game’s greatest acts of heroism has already occurred. Sophie Gustafson, the fine LPGA player from Sweden, was presented the Ben Hogan Award from the Golf Writers Association of America on the Wednesday night before The Masters began. The Hogan Award is given “to an individual who has continued to be active in golf despite a physical handicap or serious illness.” In Sophie’s case, the handicap is a stutter.

It’s odd for me, as a fellow stutterer, to categorize our mutual condition as a handicap. But I definitely agree with Sophie that it is “part of who I am,” one of many interesting things she says in her acceptance speech, which is now on YouTube and absolutely worth watching. (She chose to prerecord the speech, which was shown to the crowd on video so that they would be out of there “before the first tee time tomorrow morning.”) I might not have thought this in my childhood, but as an adult I am convinced that my stutter has had more positive effects than negative, helping me develop everything from a good vocabulary and sense of humor to a pretty thick skin. Listen to Sophie’s speech and you’ll hear those same qualities in her. And then some.

Just as the Oscar-winning movie “The King’s Speech” did last year (which I also wrote about; stick with it, the download is slow), Sophie’s speaking out should help demystify stuttering for those who still snicker and get impatient when we speak. By coming forward, she is performing a noble and selfless act, acting as a role model and helping thousands of others know they are not alone.

Her bravery speaks for itself.