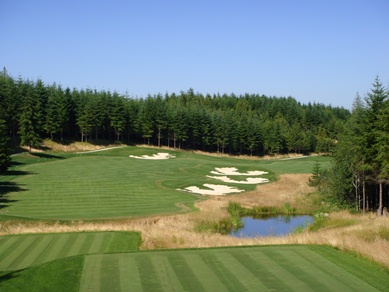 Every hole at Salsih Cliffs is isolated by thick forests and laid out as eye candy.

Casinos usually consider their golf courses an amenity for gamblers, a very large and grassy version of the free drink. They don’t need to make a profit on it like “normal” courses do, just like they don’t need to make a profit on the casino bar. Plus they often have money to burn.  So when building a course they tend to hire the best architects and spend lavishly – designer Rees Jones, no stranger to the casino golf business, told me that the courses he did for Foxwoods casino in Connecticut, which required an enormous amount of expensive blasting, would never have been built by a run of the mill developer. Casino courses, once built, also usually receive white glove maintenance.

Joining Rees Jones on the list of architects who have regularly embraced the casino golf craze are Tom Fazio, Robert Trent Jones, Jr., Jack Nicklaus, Davis Love, and Gene Bates. Bates’ may not be the most famous in the bunch, but his work certainly stands up to the highest critical standards. I recently wrote about his acclaimed Circling Raven casino course in Coeur d’Alene, Idaho. Circling Raven perennially makes every magazine’s list of the world’s best casino courses, and is usually the first or second highest rated layout outside of Nevada.

Last week Bates’ latest casino creation opened at the Little Creek Casino resort just outside Olympia, Washington, and very convenient to Tacoma (30 mins) and Seattle (60 mins). It is also very convenient (30 mins) to future US Open venue Chambers Bay, a new must-play for golf pilgrims, giving the area a one two punch that begs for a visit. The major difference is that while Chambers Bay is in the top price range of publics, the new Salish Cliffs golf club is a bargain, and you can practically play it four times for the cost of a round at Chambers. It is also really good.

Bates got about 400 pristine acres from the Squaxin Island nation, a hugely generous piece of land, and as a result, you cannot see any other holes from the one you are playing, with just two exceptions including the unique double green for nine and eighteen. The land is rolling on mountain foothills, with dramatic elevation changes, more than 600 feet on site, and it is covered with the signature tree of the Pacific Northwest, the majestic Douglas Firs. The bunkering is natural and first rate, the place is just beautiful, and for a maximum price of just $89 – including cart – you feel like you have the entire place to yourself, a beautiful round through nature’s solitude.

It also plays well for all abilities, forgiving off the tee but long form the back, and offers a great routing and hole variety, plus several risk/reward opportunities that put your course management to the test. I loved the drivable par-4 second (maybe because I drove it) and there are a few reachable in two par-5s, and an enormous length variety in the par-3s. Everything about the course works, from aesthetics to maintenance to the variety to the flow. It was a hoot to play – I played it three times and it never got old.

My colleague Robert “Bad Bob” Fagan joined me on the trip, and his recent write up is much more detailed. I’d just like to alert readers to a notable new course that is also one of the top golf values in the nation, and will almost certainly be ranked alongside Bates’ Circling Raven – if not higher – in the Top 100 You Can Play come next year.