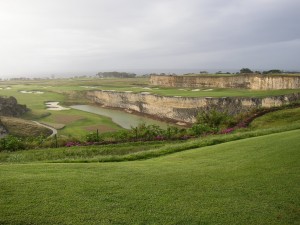 Laid out in tiers, like an upside down wedding cake, the stunning Green Monkey is unlike any other course on earth.

What’s the top golf course in the Caribbean?

Ask most people and you will probably get the same answer, Teeth of the Dog at Casa de Campo. That is certainly what the golf magazines think, and the Pete Dye design, the first great island course, has long been the only Caribbean course ranked by Golf Magazine in the World’s Top 100.

In recent years, there have been a slew of high profile new courses in the region. Jack Nicklaus, Nick Faldo, Gary Player, and PB Dye have all followed to the Dominican Republic, and Pete Dye himself returned.  Other top designers have taken to the islands, with Robert Trent Jones, Jr on Nevis, Thomas McBroom on St. Kitts, Greg Norman and most recently, Rees Jones, in the Bahamas.

But the very best course in the Caribbean – and one of the very best in the entire world – is one that you have probably never heard of, though you have certainly heard of the designer. Tom Fazio has more Top 100 public courses than anyone, but unlike his brethren, rarely ventures outside the continental US.  There are no Fazio courses in Scotland or Portugal or Vietnam, while other architects are falling over themselves to build in such locales.

There is however, a Fazio course in Barbados, and it is a true must-play.

It is called the Green Monkey, and it has been opened for a few years, but seems to be intent on keeping a low profile. The honest truth is that much of the golf course rating business is driven by marketing and public relations, and editors and raters for magazines are actively courted, invited and flown (complimentary) to new courses in the hopes of winning their accolades. The Green Monkey, on the other hand, is part of an old and exclusive and expensive and very Anglo resort, Sandy Lane, which may or may not know that the British Empire no longer rules the world. Management there plays by different rules, and seems to feel that such open solicitation is beneath their dignity. Sandy Lane is famous for its celebrity guests and royalty, and for occasionally indifferent treatment of American visitors.

The fabulously overpriced resort has two and a half golf courses, the Old Nine, the very good Sandy Lane Country Club, which is fairly open to visitors, and the exquisite Green Monkey which is not. It is basically the Shadow Creek of the Caribbean. Not only is play limited to hotel guests (don’t be surprised if it costs a thousand bucks a night), tee time are restricted to one hour each morning, and cost $385.

At the end of the day you are looking at more than it costs to play Pebble Beach. But the Green Monkey might just be better. And like Pebble Beach, it opens with its weakest hole, before exploding into scenery that can fairly be described as stunning.

Today there are lots of courses built from old quarries, and so is the Green Monkey, but besides that, it has little similarity to any other golf course you have ever seen. I call its routing an “upside down wedding cake” with layers of tiers, fairways set on flat cliffs and separated from those above and below by vertical walls of exposed rock ledge. The course spirals down and down to the floor of the quarry, and then back up again. Every hole from two to eighteen would be the signature at most courses – it is that good. 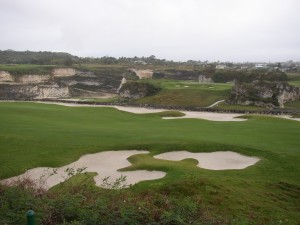 The Green Monkey plays down into a 22-acre former quarry, across the canyon floor, and back out.

The Green Monkey plays around, along and inside of a 22-acre canyon, with sea views from the higher holes. Everywhere you look you have the feeling something special is going on, so much so that it is can be visually overwhelming. No hole here is straightforward, and many feature an entire course worth of features: elevated tees, stepped fairways, clusters of scallop shaped bunkers, ravines, cross hazards, lakes, cliff edge drop offs and ocean views. Fazio’s choice for signature hole is the eleventh, a long par-3 on the center of the valley floor, playing through a gap in the quarry walls to green with a huge bunker short of it that contains a grassy island in the perfect shape of the course’s logo, a green monkey. There are real live monkeys throughout the course, but they hardly matter given the setting. Many holes here are awesome, but eleven to sixteen simply could not be better.

It may sound like heresy, but I put the Green Monkey in a league with the likes of Northern Ireland’s Royal County Down, New Zealand’s Kauri Cliffs, Oregon’s Pacific Dunes, or my favorite, Scotland’s Ailsa course at Turnberry, so breathtaking in raw beauty that it transcends the merely great golf courses. There is nothing subtle about it, but for architecture junkies out there, I will add that Fazio has also accomplished a near perfect design, with holes of widely varying length and many strategic risk/reward options. Since there is nothing similar, it is easy to dismiss the Green Monkey as a gimmick, but the same was once true of the Old Course at St. Andrews.