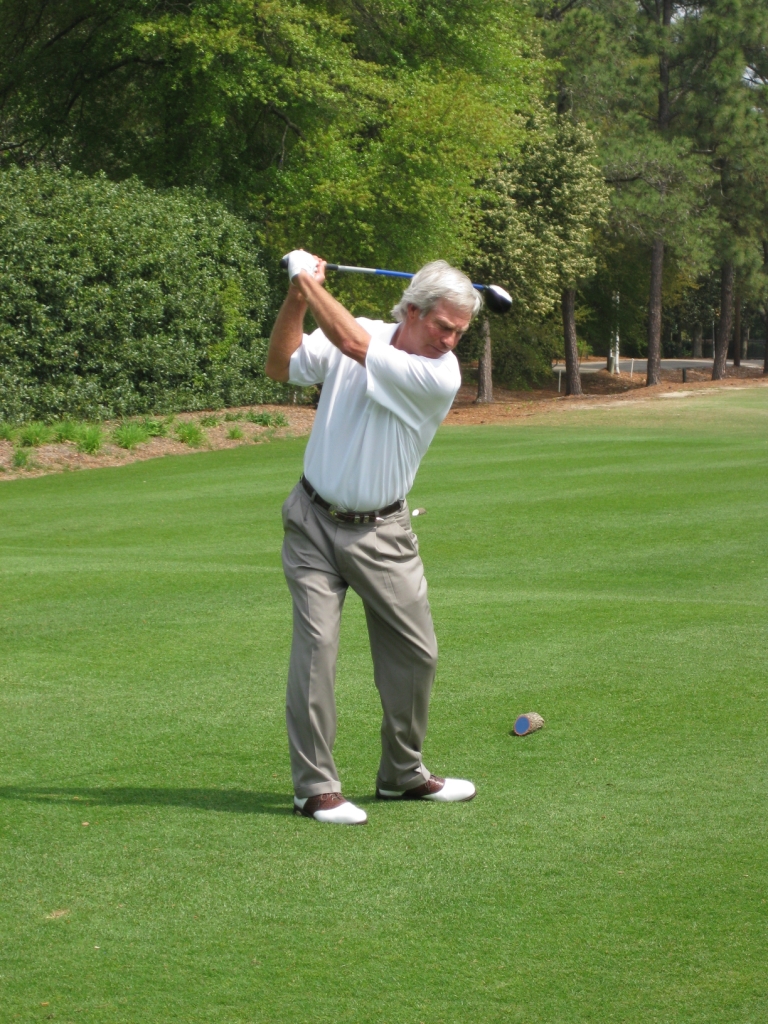 Built in 1903, Pinehurst Number Two, the career highlight of one of the game’s greatest designers, Donald Ross, has long been ensconced in the Top 10 US courses in major golf magazine rankings. Now it deserves to be.

The course has always been famous for its signature green complexes, which have been variously and erroneously described as upside down saucers, domed, small, etc. They are actually fairly large, but so many edges drop off that they play small – it is very hard to keep approach shots on, and really, really hard to get up and down from near the green. In fact, the course is infamous for players chipping on and over, than chipping back on and over and this process never ending – or in my case, going bunker to bunker, back and forth, until I picked up. Perhaps most famously John Daly gave up his chipping attempts when the ball refused to stay on the green and walked off mid-round, simply giving up – in the US Open.

But over the decades the rest of the course had gotten blah. What was once sand or native grasses became fairway or very friendly short rough, to the point where there was a sea of green as far as the eye could see. Pinehurst Number Two became a grip it and rip it course where you could hit your tee shot almost anywhere and play it. The greens were still awesome, but the tee shots were not, and the result lacked any visual interest. A great example is the short par-5 fourth, where until recently, the best strategy for getting home in two was to skip the fairway altogether and intentionally hit driver into the right hand rough, the furthest line you could carry off the tee. Not anymore.

The course has hung on to its fame over the years mainly thanks to history, which it has plenty of, and that’s putting it mildly. It has by far the most golf history of any US course, and is second globally only to the Old Course at St. Andrews. It is no coincidence that Pinehurst is widely known as the St. Andrews of the United States. The list of historical golf events that have taken place here are too long to name, but it is the only course on earth hat has hosted two different Majors (PGA Championship and multiple US Opens) AND the Ryder Cup. It has also hosted the Women’s Open, multiple Amateurs, years and years of the once ultra-prestigious North/South, and even the TOUR Championship. It has easily hosted the most important Championship tournaments at every level, from junior to women’s to amateurs, of any course in the nation. The course will make further history in 2014, when it is set to become the only course ever to host the US Open and Women’s US Open back to back.

By the way, the USGA had an very active hand in this revamp of the course, and all indications are that Pinehurst Number Two is taking up Old Course status as a permanent fixture on a never before seen US Open rota that will bring the event here many more times in the future. 2014 will be the course’s third Open in just 15 years.

Given all the history and tradition that surrounds Number Two, it was a bold move for the owners of the resort to undertake such a sweeping renovation, or restoration, depending on your perspective. As radically different as Number Two looks now, the work is mostly historically accurate, more of a return to the layout Ross worked much of his life on (It opened in 1903 but he lived until his death n 1947 in a home along the third fairway, and repeatedly tweaked it, including a major overhaul – he swapped the sand greens for grass – for the 1936 PGA Championship). The reinvigorated course looks more like the 1936 version than anything in the past half century. The Pinehurst archives are among the most extensive and best kept in all of golf history, and an endless litany of aerial and other photos from the past century-plus were employed to reproduce historically precise versions of many of the holes and features. 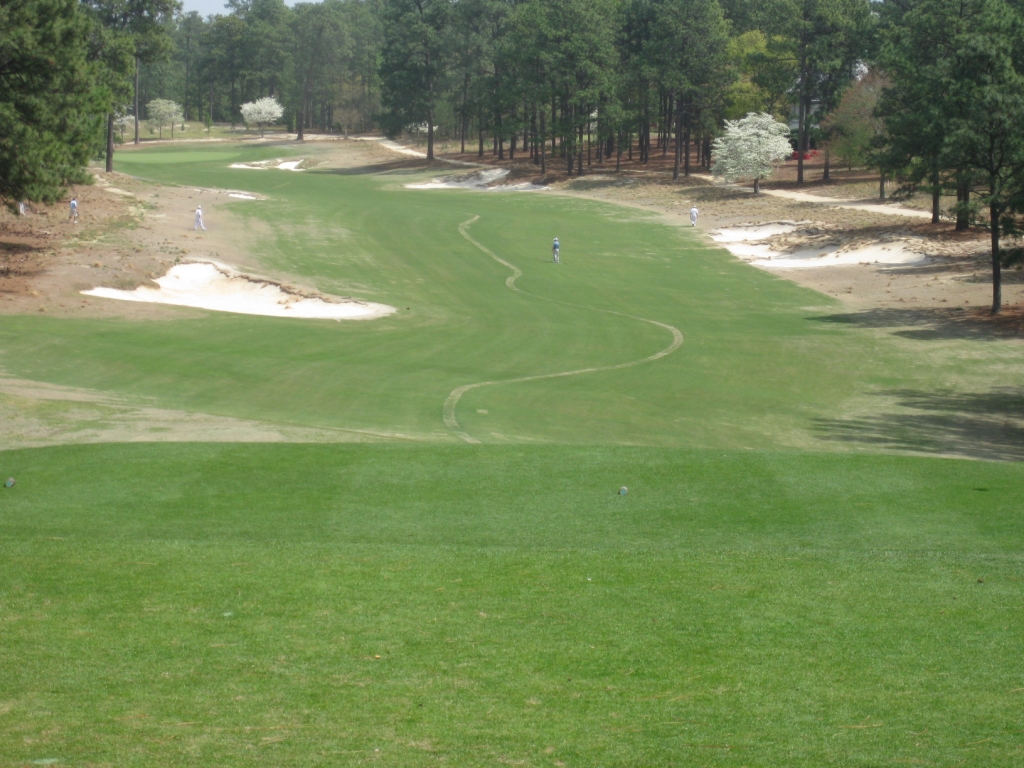 On the par-5 fourth, everything on the right side, all the way to the cartpath, used to be grass. The waste area frames the hole and challenges those who would take the shortcut right of the fairway bunker. This is typical of the rest of the course.

I was fortunate enough to attend the grand reopening on Monday, at which Ben Crenshaw, who with his longtime design partner Bill Coore, handled the work. His reverence was obvious, and he won in what could have easily been a no-win scenario. It was almost assumed that purists, traditionalists, members and locals and would rail against the changes even though they are more authentic than what we had a year ago. But so far the reviews have been overwhelmingly good. For a really in-depth architectural analysis of the changes, check out the Golfweek feature by Brad Klein (The Golf Life, page 44), the preeminent US golf course architecture critic. Klein, no fan of hyperbole, calls the work “as radical and path-breaking as any in the history of golf course architecture,” and notes that the existing design “was more work than charming. It was an exacting test, but not an aesthetic joy. That’s all changed now.”

You might even call it dramatic. But no matter what you call it, the course is definitely back in the pantheon of top “must-plays,” and Pinehurst commands a pilgrimage as much as Pebble Beach or Bandon Dues or St. Andrews. 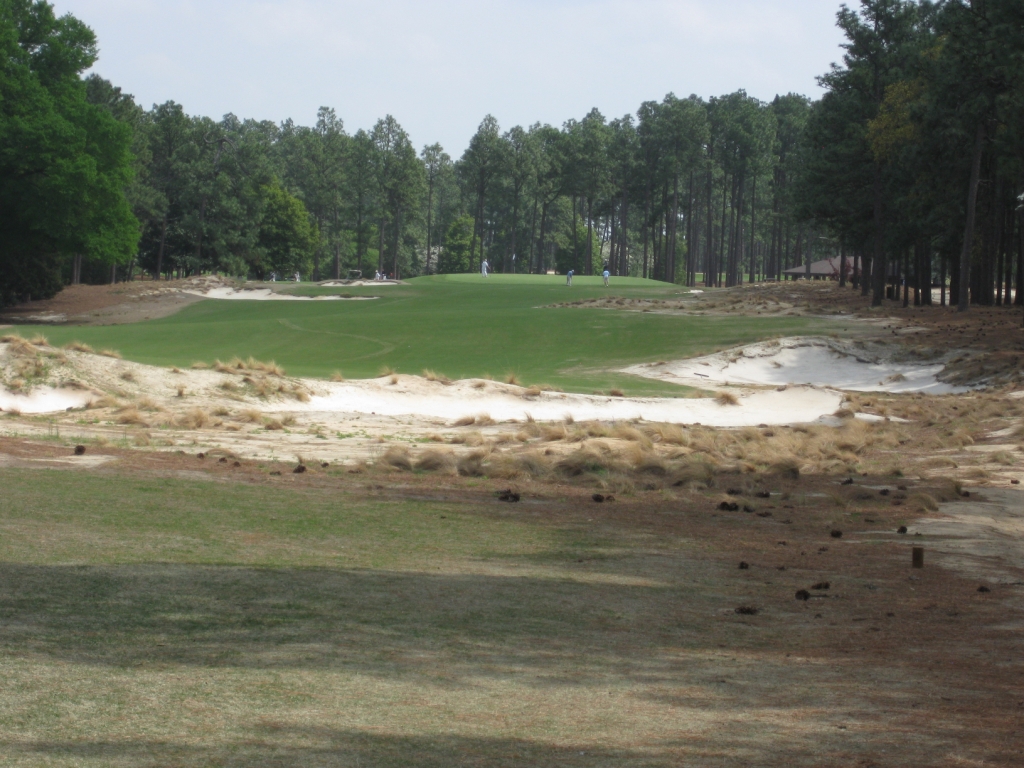 Welcome to the Sandhills region! The restoration brought plenty of sandy waste area into play.

The biggest change is the widespread installation of waste areas bordering fairways, a return to the nature of the very Sandhills region in which the course sits, terrain uncannily similar to British Isles linksland. As Crenshaw put it, “When a young Scot named Donald Ross got here, he was very happy with what he saw, which was sand. It reminded him of his home in Dornoch.” Native wiregrass has also been re-introduced in place of what was once plush rough. The results of these changes are twofold: they make it more important to hit the fairways (many of which are actually wider then they were with the omnipresent rough) and most importantly they frame almost every tee shot, What was once a bang it out there feel has been replaced with clear lines of play off the tee, mental targets that put much more emphasis – and much more fun – on the tee shot. It’s gorgeous. Go see for yourself.