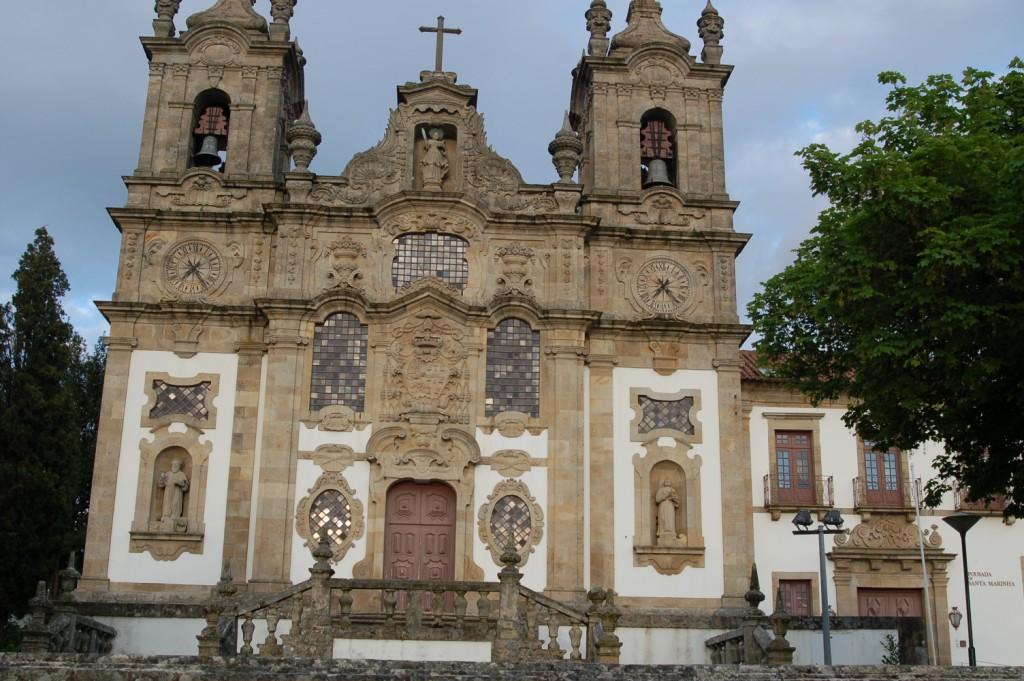 That's no church, at least not anymore. Tonight it's your hotel.

Very few people know that Portugal has pousadas. That is a real shame.

Pousadas are a very special hospitality option unique to the Iberian Peninsula (Spain has the same thing, but they are called paradores). Back in the 1940s, the Portuguese government faced two challenges: to increase tourism, and to rescue and preserve many of its ancient and historic wonders. By creating pousadas, they solved both problems at once, and travel loving golfers today should be very, very thankful.

The Portuguese began converting historic structures, including castles, monasteries and churches, most of them centuries old, some constructed nearly a millennium ago, into a government operated chain of small inns. Sleeping in renovated, one of a kind, museum-like buildings was an instant hit with visitors and Portuguese alike, and today there are more than 40 pousadas in every corner of the country, and even the Azores and Brazil, that former outpost of the Portuguese empire. The result is an array of overnight accommodations unlike any imaginable. These stunning edifices typically command the grandest sites in town, especially in central and northern Portugal which I toured extensively – in medieval terms this always means at the top of the town’s highest hill. Driving around, I quickly discovered that by going uphill at every fork, no matter how narrow the cobblestone road or how precarious the arched castle gate, I would get to my nightly dwellings, each more amazing than the last. 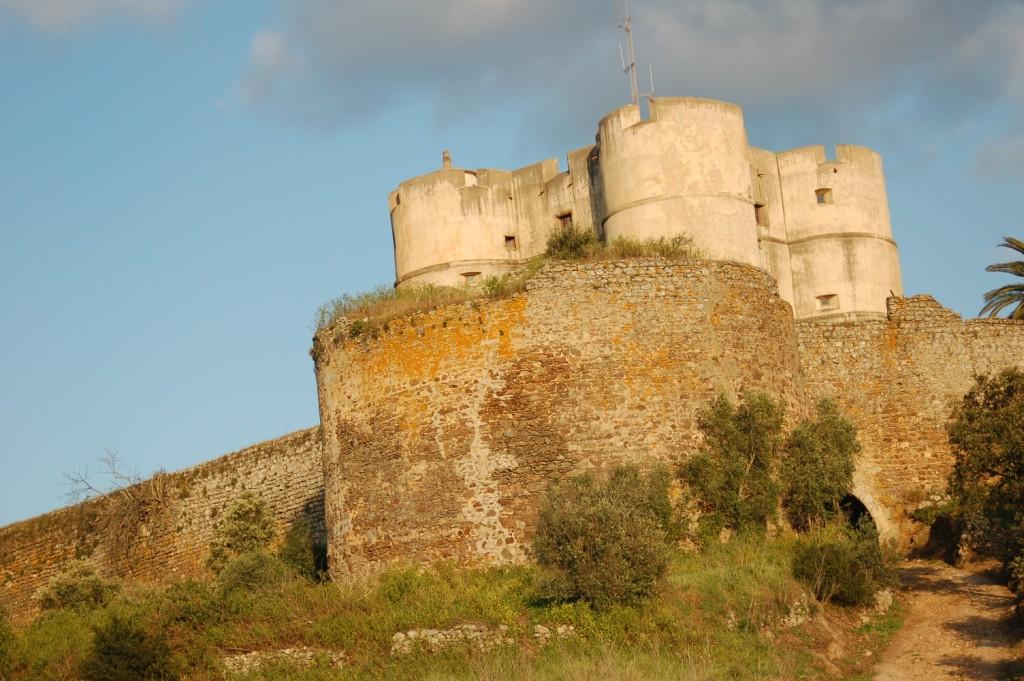 That's no castle, at least not anymore. Tonight it's your hotel.

The Portuguese pousada is essentially a bed and breakfast on steroids, where an average of two to three dozen rooms share a building fit for, and often once owned by, royalty. Pestana, the Portuguese hotel company recently hired by the government to operate the properties, humbly calls them “living history hotels,” but this hardly does justice.

Take for instance, the Santa Marinha, in Guimaraes, near the Port wine epicenter of Porto, the nation’s second largest city. This is the kind of building you would visit as a tourist in Tuscany or Provence, simply to walk through and ogle. Oozing charm, it resides within a 12th century convent built in what today would be “billionaire estate style,” amidst a huge park of landscaped grounds and gardens overlooking Portugal’s former capital, Guimaraes, the “Cradle of the Nation.” Inside its walls, the scale is epic, with impossibly high ceilings, innumerable drawing rooms and libraries, balconies everywhere and grand vaulted entryways to the cavernous dining room and lobby, all for just 49 rooms – and this is among the largest. With its stone walls, candlelight and racks of vintage port bottles, the dining room is no mere accessory here, but in many way the crowning feature. 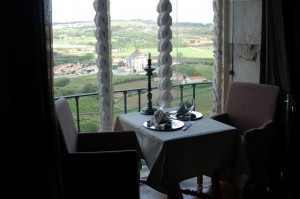 Table with a view? Pousadas typically have the best restaurant in town, and this one, overlooking medieval Obidos, may be the most popular of all, famed for its roast suckling pig.

Eating is a big deal in Portugal, and an even bigger deal at pousadas, where rates always include breakfast, but optional all-inclusive meal plans are an attractive option and good value, especially since the pousada often is the best restaurant in town and attract locals in droves. Every property offers a full restaurant, and each emphasizes truly local specialties of its often very particular region, along with a large and affordable Portuguese wine list.

This is just one of the many benefits of pousada vacations: Americans typically shy away from hotel dining while traveling, yet many seek out authentic local food, and the pousadas have done this research for you, to the extent that leaving the inn to eat is usually a mistake. In seaside Sagres, the southeastern peninsula from which all the famed Portuguese navigators departed for the New World, the specialties are seafood soup and stuffed sardines. In Estremoz, the rugged and mountainous “marble country” of eastern Portugal, the choice is roast lamb with rosemary. At arguably the nation’s most popular pousada, or certainly the hardest to reserve, in the magnificent white washed walled town of Obidos, north of Lisbon, the specialty is roast suckling pig. Obidos is one of Europe’s few walled hill towns so well preserved that you can still walk atop the parapets for the entire circumference of the city, beginning and ending at its centerpiece, the castle turned pousada – circa 1282. 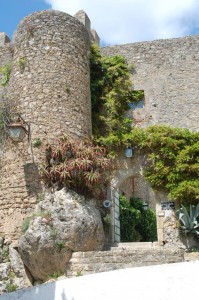 The pousada at Obidos is a former castle built right into the city walls. Location does not get much better than this.

Pestana’s pousada portfolio allows you to mix and match when booking weekend or weeklong pousada vacation packages. Lisbon is on the coast in the southern part of Portugal, and from there most golfers with a week to spare choose to go south to the Algarve, Portugal’s Florida. But don’t miss the coast immediately north of Lisbon, which includes the famed Robert Trent Jones course at Penha Longa, which incorporates ancient Ram aqueducts, and what many consider the best course built in Europe in years, Oitavos Dunes.

It would be no exaggeration to say that Portugal’s unique brand of memorable historic inns offer something for everyone, from value seekers to adventurers. The pousadas are different and widespread enough to offer a myriad combination of thematic vacations, along with deals and bargains. The group packages nearby properties for pousada to pousada biking and hiking tours. It mixes city and country destinations for quick and comprehensive Portugal immersion vacations, and even has religious packages for the devoutly inclined. Most importantly, it combines golf country properties into pre-planned, value packed, weeklong golf vacations.

23 of the pousadas are listed under the golf category, and there are also golf circuits and packages. As of the day I wrote this, you could book 7-nights in pousadas with 5 rounds of golf for under €400 per person.

In addition to themes, specials abound, including “Pousada Passports,” the lodging equivalent of a Eurail Pass, offering a certain number of nights for a set price. Recent offerings included a 7-night unlimited pousada pass with rental car for just €392 per person. There are seasonal discounts, senior discounts, and 3-7 day packages combining pousadas with Pestana’s urban hotels. I toured for a week, but a similar vacation can be customized to any length, even a long weekend. After all, Portugal is the closest country in Continental Europe, one of the least expensive, and virtually every tourist site in the country is easily within a day of Lisbon, where most visitors arrive and depart.

On Pestana’s website the pousadas are organized by theme and circuits in order to make planning a driving vacation easier. General travel information, along with many other deals and special promotions, including pousada packages, can be found at the Portuguese Tourism Office’s excellent US site.

One Response to “The Best Golf Vacation You’ve Never Heard of. Play Portugal by Pousada.”