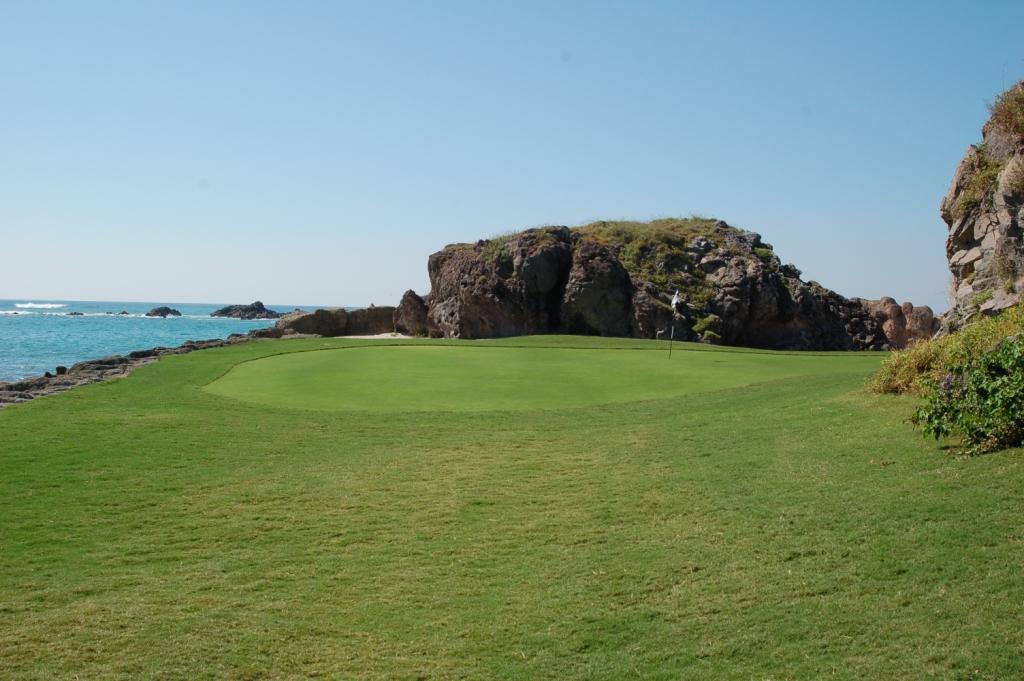 Mexico's Punta Mita is home to this famous hole, "Tail of the Whale," the world's only natural offshore island hole. It is on one of the resort's two Nicklaus Signature ocurses. Punta Mita also has two excellent hotels, Four Season's and St. Regis, endless beaches and every type of restaurant, spa and amentiy you could imagine. But it got skipped over on Conde Nast Travelers best golf resort list by other resorts with no golf at all or just a par-3 course. Punta Mita joins an elite club of resorts ignored by the poll that include Bandon Dunes and Pinehurst!

Continuing yesterday’s rant against the stupidity of the “Top 80 Golf Resorts” in the June 2010 issue of Condé Nast Traveler, I am going to focus on specific effronteries to my golf sensibilities.

Yesterday I covered the structural flaws with CNT’s pseudo-science and why its polls in general don’t work. Now I would like to discuss why they need an editor on board who actually knows what golf is. That might have prevented the following abuses:

One of the categories the poll covers, and certainly the most important one, is “Course Design & Access,” a rather stupid way of saying the rating for the actual quality of the resort’s golf. I’m not sure what the “access” has to do with it, as several of the most highly rated ones have no course or none onsite, like the Beau Rivage in Mississippi whose (excellent) course is over half an hour away, or Esperanza in Cabo which has no golf at all. That’s right, no golf. Sure there is public access golf in Cabo and Esperanza is in Cabo, but does that make it a golf resort? There is public access golf in New York City, so is the Plaza Hotel a golf resort? I think not. This is especially interesting when you consider that while Esperanza is an excellent hotel, there are several equally excellent or better resorts in Cabo, specifically the One & Only Palmilla and Las Ventanas al Paraiso, wieldy considered in the hotel industry as one of the world’s finest, both of which actually have attached golf courses. Makes you wonder.

You would think in the category of Top 10 Foreign Golf Resorts, which includes the entire world outside of the US, that they could have been able to find ten golf resorts with golf. Or at least I would have.

Let’s move on to the single greatest flaw, and one that the CNT golf poll features every single year, an egregious error they refuse to fix (I’ve written about it before):

Giving the same golf course a different quality rating based on where you are sleeping. That’s right – the course actually becomes better or worse when you play it, depending where you bedded down the night before. Strangely, I’ve never seen this phenomenon mentioned in a golf course design book. CNT must be the only “researchers” who know about it.

They frequently give different ratings for “Course Design & Access,” to two hotels that have exactly the same golf course(s), meaning they give two different rating to exactly the same golf courses! Now you could make the rather lame argument that one of the properties is closer to the golf, and thus has slightly better “access” and this would explain the discrepancy in “quality & access.” You might even be right, except that at CNT, the one with the better access gets the worse rating. At Pebble Beach, The Inn at Spanish Bay’s courses get the lower rating to the same courses at its sibling, the Lodge at Pebble Beach, although the Inn has better golf course access. The two hotels are part of one resort, under the same management, and have the exact same four golf courses for guests. You might be tempted to think that the “editor,” and I use the term both loosely and derisively, meant to differentiate between the Pebble Beach Golf Links, the course closer to the Lodge, and Links at Spanish Bay, closer to the Inn, but that is not the case. They very specifically state that the Pebble Beach Resort has “four 18-hole courses and one 9-hole course,” meaning all are recognized, and all are equally part of both hotels. Interestingly, on another stupidity note, they skipped the resort’s best hotel, Casa Palmero altogether, the one Tiger stays at. I guess no CNT readers stayed there last year, so it might as well not exist.

How could this collection of 63-holes possibly get a different rating, just for the quality of the golf, based on which hotel you stay at? It could not, which is why the poll is so damn stupid. It’s the kind of thing someone might lose a job over at a well run publication, yet it happens, without fail, at CNT every year. And it’s not just Pebble Beach. They do the exact same incredibly stupid “different rating for same golf course trick” at Sea Island, Georgia and Hawaii’s Mauna Lani and Wailea resorts.

On the same note, what do you think the score for quality of golf at Pebble Beach, or at least for guests of the Lodge at Pebble Beach was? Yes, a perfect 100 (but not if you stay at a different resort hotel there). Now I like Pebble Beach, it’s without a doubt one of the world’s greatest golf resorts, but is there any chance that these 63-holes are flawless? No. Has anyone ever even played the 9-holer or the mysterious fourth eighteen, the Del Monte? The opening hole at the Pebble Beach Golf links alone, famously the worst of any great golf course, would disqualify perfection. Then again, as mentioned in my last blog, the only other resort with a perfect golf rating is the 36-hole World Golf Village in Florida. For this idiocy firing isn’t enough, someone needs to be shot.

Moving on to other offenses:

The third best golf resort in the Southern US is improbably Barnsley Gardens, whose course garners an impossible to comprehend 97.3 rating. To put that in perspective, this course, which I thought I was the only one who had ever played, and is fine but forgettable, beats out, among others in the South, Kiawah, Reynolds Plantation, Sea Island, and in fact every other resort in the region. That’s right, CNT would have you believe that the Barnsley Garden course (don’t feel badly if you’ve never heard of it, most people haven’t) is the best in the southeast. I am simply dumfounded. By the way, it also bested EVERY SINGLE international course, including all of Scotland and Ireland. Why even own a passport?

The International (they called it Foreign) list is the worst. The ten resorts listed include the one with no golf at all (Esperanza), and elsewhere in Mexico, they had Moon Palace and Hilton Los Cabos. Now I like the Moon, but just in the Riviera Maya it clearly trails Mayakoba, which also has several better hotels. The Hilton has fine golf, but so many better Los Cabos hotels have access to the same courses. Where are Las Ventanas and Palmilla? They include the major Irish resort with the least impressive golf, Dromoland Castle, over Adare Manor, the Lodge at Doonbeg, Powerscourt, Lough Erne, Ballyliffin, Waterville and so on and so on, but my personal favorite on the list is the Fairmont Southampton in Bermuda. Even the folks at Fairmont don’t consider this one of their golf resorts, and they have plenty to brag about. It has a par-3 course and nothing more, meaning the only other one on the list it can arguably beat is the one with no golf at all. The par-3 course garnered a pathetic 65 rating, yet the resort still beat out every single one in England, Wales, Continental Europe, Asia, Australia, New Zealand, the Caribbean, South America and South Africa. Hell, it isn’t even the best golf resort in Bermuda! It isn’t even a golf resort at all.  It staggers the mind to think that they could not find more than eight “foreign” golf resorts with actual courses.

Spain, Portugal, France, Italy, Vietnam, Thailand, Indonesia, Japan, China, South Africa and New Zealand EACH have at least a couple of golf resorts better than almost everyone on the world list here. They should have called me and asked.

The Florida ratings are so f*cked up it’s painful to describe, but suffice to say they skipped most of the state’s best resort courses, including the Blue Monster at Doral, Hammock Beach, the TPC Sawgrass, and Sandestin and went with a hodge podge of crap.

The only things I can say in CNT’s defense was that Arizona rating are not awful, and they did manage to include the American Club in Kohler, even if they had to redefine a broad swath of the US, not including California or the West , as the “Northern US,” just to find it a place.  Of course in doing so they skipped every major golf resort in Michigan, and there are a lot, especially including venerable Bay Harbor and Treetops, in order to honor the likes of the Equinox in my home state of Vermont. I like the Equinox, but it would be foolish to suggest it is worthy of a top 5 over every Michigan resort, New York’s Turning Stone, all of Pennsylvania’s grand golf resorts, most of Minnesota, and so many others.

I have just one rant left on this horrible topic…