The Faldo course at MissionHills is the resort's best, and visitors can try this island hole for themselves.

If you read my blogs, you will soon discover that I am pretty obsessed with world records. A few years back, for a story for Golf Magazine, I broke the Guinness World Record for “The Greatest Distance Traveled Between Two Rounds of Golf Played in The Same Day,” an impressive 7,496 miles. Last year I wrote a very interesting book about the history and culture and characters behind Guinness World Records, titled Getting Into Guinness (available at Amazon).

So when I see anything having to do with world records and golf travel, and that is a pretty thin niche, it captures my attention.

That’s how I found myself in Shenzen, China, playing golf a resort called Mission Hills. People who say everything is bigger in Texas should really go to China. Everything there is really, really big and Mission Hills is no exception: with 12 courses, it is by far the biggest golf resort in the world (Pinehurst is second with just eight), and it is even in the Guinness book. 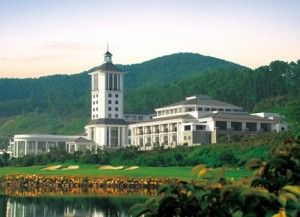 It may be in China, but everything about Mission Hills including one of its grand clubhouses, feels like any other top golf resort on earth.

Suffice to say, they like to do things in a big way here: Mission Hills also has the largest tennis facility in Asia (51 courts, 1998 Davis Cup), three spas including the largest in Asia, the largest clubhouse in Asia, even the largest outdoors children’s playground in Asia.

I won’t bore you with detailed course by course walk through, but here are the pertinent details. Mission Hills is a real world class golf resort, complete with a couple of hotels, numerous restaurants (Eastern and Western), bars, spas, plus a David Leadbetter Academy, all the things you expect at a modern golf resort. What it has that you might not expect is a foot reflexology center, a kite flying area, and 18-full sized holes completely lit for night play. Really. The idea is that you can play 18 in the morning, take a nice break for lunch, the pool and maybe a massage, then play 9, have some cocktails and dinner, then go back out and finish your round. I consider that pretty civilized (it also can get really hot so it helps to avoid midday). Caddies are required, and to handle the crowds, they have 2500, all of them women in uniforms, with 200 who speak English specifically for American guests.

There are only a handful of golf resorts on earth where you can really go for week without any driving or flying around and not get bored. Mission Hills is one of them. In fact, you could go for two weeks. That’s the beauty of a trip to the world’s largest golf resort: it does not require a whole lot of planning. China is a long way from home, and to many, daunting, exotic or confusing. Not Mission Hills: book a golf package and go, the rest is self explanatory. The resort is just over an hour from Hong Kong, about the most user friendly city in the Pacific Rim. I had a driver pick me up at my hotel in downtown Hong Kong. That’s it. About as tough as getting from Manhattan to JFK. 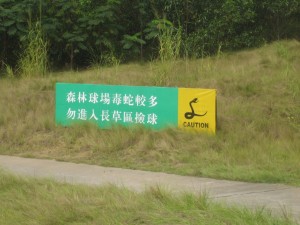 You don't need to speak Chinese to get the drift of this warning sign at Mission Hills.

The logic was to feature courses by golf playing legends rather than design legends, but in the case of Jack Nicklaus, Greg Norman and Nick Faldo, they got both. You won’t find Tom Fazio or Pete Dye represented, but you will find first efforts by the likes of Vijay Singh, David Duval and Annika Sorenstam, and others by fast rising designers like Ernie Els and Jose Maria Olazabal. The Norman course is the toughest, the Faldo and Nicklaus are the best all around, but the quality level is high and you won’t go wrong on any of the routings. 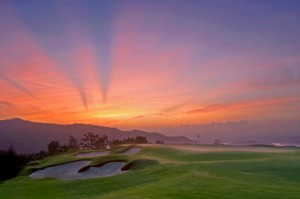 This course was the first by the best woman golfer in history, Annika Sorenstam, and she put a lot of effort into it, which paid off.

Mission Hills also has reasonable prices, good food and solid 3-4 star accommodations. What are you waiting for?