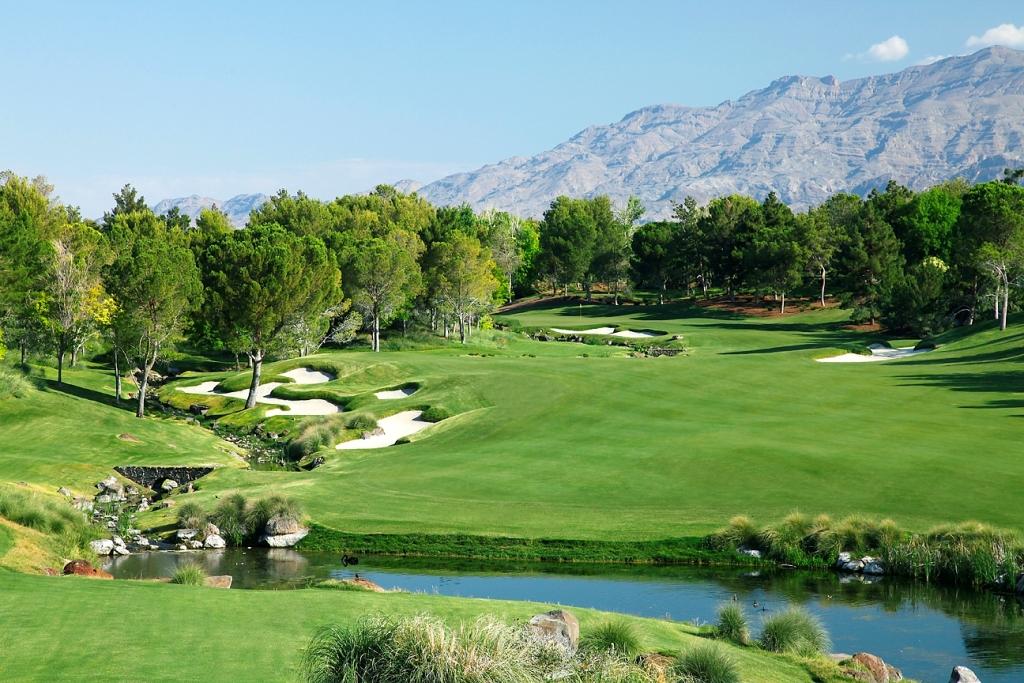 The par-4 Ninth at Shadow Creek in Las Vegas is one of many beautiful but potentially hazardous holes on the course. It plays 409-yards from the tips, putting players from several tees within range of this penal cross hazard. Hit your drive into the creek, and you have probably made one of the most common mistakes in golf (see #3 below): forgetting about roll.

With July 4th in the rearview window, the heart of summer, and real golf season, starts today. Let’s make 2010 the year you get it right.

So to help you avoid the usual pitfalls, I have compiled a list of the then biggest mistakes most golfers make. Avoid these and I guarantee you will score better.

Here’s the deal: I don’t know you, and you might well be a better golfer than me, but I know more about golf than all but a handful of people in this country, and I have played with hundreds of different players of all abilities, from numerous PGA Tour pros and Major winners to scratch amateurs to first timers, single digit players and hackers, and there are some mistakes that a good swing just won’t overcome. So if you are anywhere in the realm of the “average” golfer, I can take between 2 and 6 strokes per round off your score today, without having to see you. How? Read on.

First a Disclaimer: These are not actually tips. If you want tips, go to a teaching professional. They are the ten biggest mistakes in golf. The tip is to stop doing them.

1. Hitting Too Much Club on the Second Shot of a Par-5.

This is the Numero Uno, King Daddy of stupid things golfers of all abilities do on a regular basis, but the good news is it easy to fix once you know why you are a moron for doing it. For some reason golfers are programmed to swing for the fences on the second host of a par-5 whether they can reach the green or not, and for many, pulling a fairway wood or long iron is an automatic, thoughtless reflex. It’s no coincidence that these are also the most difficult clubs to hit, with the highest potential for really bad things to happen to your score. So as you approach your tee shot on a par-5, there is only one question you need to ask: “can I reach the green from here?” If the answer is yeas, you have another question to ask, “Is it a good idea to try?” If the shot is at the very limit of your range, say 245 yards out, which is what you hit your 3-wood on your birthday, and there is water in front and it is a small target, the answer should be no. But forget about the scenario where you can reach in two, because most of the time you can’t or we would all be putting for eagle every round. Let’s say you can’t reach it, it’s 265 out and your best shot will go 230. Most people play for the 230 shot anyway. Stupid, stupid, stupid. It might go 230 straight, still leaving you with a feel wedge in, under the best outcome. But it might go 230 sliced, OB and lost. It might be topped, popped up or any other manner of shots that happen all too frequently when we try to bust a fairways wood and go 40 yards, leaving you screwed again.

Tour pros dissect the course backwards and figure out where they want to be hitting their approaches from, and play to that spot from the tee. Amateurs hit the ball and hope, then play the approach shot they are dealt. Be more like the pros. What is you favorite, absolutely most reliable shot? For most of us it is a full swing, not a finesse shot. I know I am better off hitting a full wedge than a half. My comfort zone for approaches is 105-130, the range for my full wedges, so if I am 265 out, I am going to hit a 145 shot, right in the middle of that range, to account for plus and minus misses. That’s right, I am going to hit an 8-iron on the second shot of a par-5, whereas most folks would hit 3-wood, a difference of about 7 clubs. My shot success percentage is much higher, and also much less likely to get me in any trouble, and even if I miss it badly, I still have a play to the green, but most of the time I will be simply be hitting a sand or pitching wedge from the short grass, an ideal situation.’

RULE: Just do not hit all you can on the second shot of a par-5 when you cannot reach the green. The only exception might be if you are great with your fairway woods and long irons, there is absolutely no trouble in front, and you love chipping and pitching from 30-80 yards out.

2. Not Believing an Unplayable Lie is Unplayable.

A couple of months ago, on the 18th hole at Royal Portrush, in Northern Ireland, during the best driving round of my entire life, I needed to make par for a friendly tournament I was playing, so of course, I swung hard on the tee and missed my first fairway of the day, hitting my drive into the first cut of right hand rough. When I got there my ball was sitting in a rabbit hole, a pit about ten inches in diameter and six inches deep, and there was, in retrospect, no physical way to hit it out of there. Taking an unplayable lie would have left me with only one chance at par, getting up and down from 190 yards out. Hitting a miracle shot out of the rabbit hole would have given me, well what exactly? I couldn’t get the ball to the green, Tiger Woods couldn’t, so even if I advanced it fifty yards, which I would be very lucky to do, I’d still need to get up and down from 140. Anyway, most of the time we don’t need to make par, we need to shoot lower scores, so the question is, do I take my medicine now, or do I take it after three failed attempts to extricate the ball, which is exactly what I did, leaving myself lying five and still in the same hole, then dropping. Needless to say I not only didn’t make par, I didn’t make 9. Most often I see this happen in thick rough. The ball is found at the bottom of a clump of knee high grass, and the player decides they can get it out, and takes a big hack and either goes under it leaving it in the same place, or succeeds in burying it into a truly unplayable lie. The question you need to ask is not whether you can get it out, but “what will you gain if you do?” In many of these cases, you’d be lucky to simply get it out, and then be next to the rabbit hole, or in the fairway ten feet from the rough, whereas in the worst case, or most cases, you are still in the trouble spot with a wasted shot facing the same decision. So why not just take the unplayable lie, and give yourself a chance to actually hit a shot and advance the ball. Too many hackers turn hero when faced with a virtually unplayable lie. Think how many times you have tried to play the dramatic shot from behind the tree only to end you further from the green, and still with no shot. One shot penalties are easy to live with, so don’t let them become three shots penalties.

RULE: In wilderness emergencies, rescuers say it is rarely the initial problem (getting lost, breaking a leg, etc) that results in a tragic end, it is the panicked response. Same for golf: everyone hits bad shots. Don’t make the bad shot worse by wasting several others trying to pretend it didn’t happen. You hit it in the deep rough, now you have to take it out.

Ask most amateurs how far they usually drive the ball and you will get a white lie, or maybe more of an ego induced exaggeration. But let’s say you are completely honest and the answer is 245. Now you are on the tee, and there is a cross hazard, a creek, that is 230 yards out. You can either lay up safely or try to bust one over it. Maybe it’s a bunker, maybe it’s a short par-4 and you want to drive the green, the situation does not matter but the principle is the same: whatever distance you “normally” drive it includes roll, a lot of roll, a time where the ball is on the ground. Amateurs get it in their heads that like with a pitching wedge, they are going to fly their driver to a spot like throwing a lawn dart. So yes, you are capable of hitting a 245 yard drive, and you do just that, and you still end up in the creek, pissed off and with a penalty. Why? Because your 245 yard drive flies something like 220 and rolls the rest of the way, except in this case, there is a creek in your roll out zone. From today on, every time you consider flying a hazard, think about it that way: flying it. I see this happen all the time to players, especially big hitters, trying to carry the inside bunker on a dogleg, which can give you a tremendous advantage if you succeed, but players are always shocked not to carry. “That’s crazy, it’s only 220 to clear that bunker and I hit it 250. How did that happen?” That happened because the bunker stopped your roll.