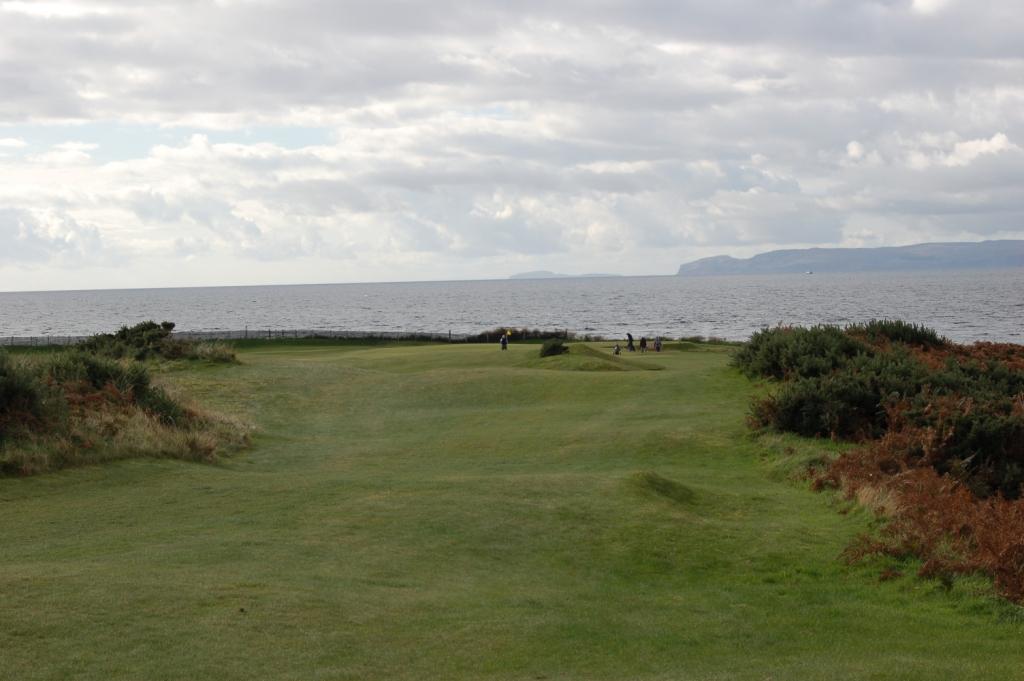 Shiskine is a beautiful links course on Scotland's Isle of Arran - but hit it anywhere near the thick rough and gorse and you'd better tee up a provisional.

Picking up where I left off in an earlier post, I am going to shave strokes off your score this summer by showing you some of the biggest mistakes in golf.

>>  Laying Up Too Close to Hazards.

This is the most demoralizing shot in golf: you finally get smart and decide that instead of the miracle shot you can’t pull off, you will play it safe and lay up, and then you go and hit it in the creek and lose your ball anyway. Or another common example is you hit it in the right hand trees, realize your only chance is to punch it back into the fairway without gaining much yardage, and instead you hit it through into the rough or trees on the other side.

Why does this happen so much?

Because golfers are greedy. Instead of saying: “that cross hazard is 180 yards out, I want to be short of that,” we think “that cross hazard is 180-yards out, I want to get as close to it as I can without going in.” Like everything else in golf, you need to leave room for error and hits strategy does not. Also, amateurs tend to hit the ball much better when they don’t have a scoring target. Approach the green and you tense up, need to hit the perfect shot, but a lay up is like being on the driving range, where we are all heroes. You loosen up because it doesn’t matter if you hit it 180, or 170 or 160, a little left or a little right, and when you swing easy and loose you tend to crush the ball. So you decided to hit a 6-iron which you normally hit 165-170, knowing that leaves you 10 yards of slack to the 180-yard creek, but you explode it and because golf courses often cut the grass real short to encourage balls into hazards, your takes couple of bounces and bids you sayonara. It is totally depressing and can derail your whole round. Fortunately there is a simple solution: when laying up, always calculate your absolutely safe club, then take one less.

>> Not Hitting a Provisional.

It pains me how many times I have seen players hit a tee shot that might be safe, might not be safe, and shrug and say, “We should find it.” There are folks I have played with who I doubt have ever hit a provisional.

The simplest reason to hit a provisional whenever you can is that you need the practice. Excluding par-3s, you are going to hit drivers or fairway woods off 12-14 holes a round. That’s not a lot of shots and it’s easy to get out of sync. A provisional is like a bonus trip to the range.

Secondly, your provisional might end up being a better play than your original ball even if you were to find it, which might make hunting for it a little less “enthusiastic.”

But the biggest reason is that when you don’t find your original ball, and have not hit a provisional, more than 99% percent to the people I have ever played with are going to do the same thing: cheat. They are going to look for their ball, not find it, give up, and drop another one as if the woods or OB was a lateral hazard, which it is not. In real golf, there is only one option at this point, which is to go back to the tee and hit another, but people are lazy, and also it is very embarrassing, especially when there is someone waiting at that tee, and they are going to get mad at you for slow play – and rightly because you should have just hit a provisional. I’m not a rules official, and you can make up your own way to play golf, and people, including myself, knowingly and unknowingly infringe on the game’s complex rules all the time, but this is the worst example. I have played with folks who don’t keep score and that’s fine. But if you do keep score, and you tell people your scores, or tell yourself your scores, and even worse, if you keep a USGA handicap, you just cannot cheat. You lose it, you take a penalty stroke that the rules do not allow for, you keep playing, and you make bogey or double bogey and you put that on your scorecard and later enter it in your handicap and it is all one big fat lie. That’s not your score, that’s not your handicap, and it all could have been prevented by hitting a provisional.

This is also the reason why people don’t hit provisionals: after they do, they know they are laying three, hitting four, but they know that if they don’t find it and cheat, they will be, at least in their own mind, laying two and hitting three and that sounds like a better deal. Why not just make up your score before you play and save the effort of hitting shots?