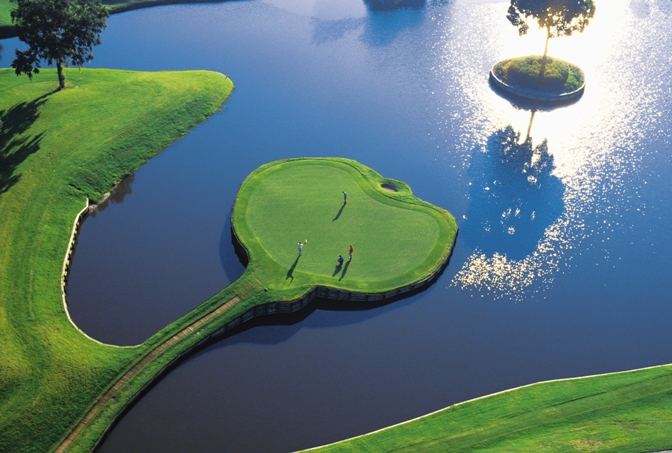 The famous 17th at the TPC Sawgrass is a good example of why the safe play on approach is to the middle of the green - regardless of where the pin is. However, this should be the case for almost every green, island or not, par-3 or not. Play at the middle and both good shots and misses wil be rewarded with putts for par and birdie instead of bunker shots and penalty strokes.

Picking up where I left off yesterday, I am going to shave strokes off your score this summer by showing you the ten biggest mistakes in golf.

4. Hitting Driver Automatically on Every Par-4.

This one is so predictable, and seems to happen more when people take carts. We pull up to the stairs to the tee box, the guy in the other cart looks at the scorecard, sees that it is a par-4, jumps out, grabs driver and heads to the tee, with no idea what the hole looks like or how long it is. Tour pros hit 3 wood, 5 wood, rescue club and long irons off these holes all the time, and they have a lot further to go. This goes back to my rule yesterday about the second shots on par 5s: ideally you want to hit the least club you need to, because every club you go down, your accuracy and consistency increases. For most amateurs, the driver is the toughest club to hit off the tee.

Here’s what I do. First, I ask, “can I drive this green?” That situation might, if you are lucky, present itself once a round. If I can, the wind is right, the elevation is right, the front of the green is unprotected, then I will try. Hey, I’m stupid too and I want to putt for eagle. So I might hit driver on a hole as long as 325 under the right circumstances if I think I can get it there, or close enough to putt. But I will almost never hit driver on a 340 yard hole under any circumstances. Why? If you can’t reach it, why take the risk of hitting driver in the first place, especially when the best possible outcome is leaving yourself a tricky half wedge in? Again, go back to the par-5 example: like Tour pros, you should have a consistent comfort distance with a full swing, a distance that is your most reliable. For me, again, it’s 105-130. So on the 340 yard hole, I only want to go about 210-225, so I will probably hit 5 wood or 3 wood. If it’s a 320 hole but I don’t think I can get there, or there is a big hazard in front of the green, I will probably hit my rescue, equivalent to a 3-iron, or maybe as little a 5-iron. Bang, it’s out there in the fairway, with a good lie, you have a pitching wedge or 8 iron in, end of story, no hunting in the woods, like when you hit driver.

Of course, some days you are just in the slot, hitting great drives, and on those days, I believe in dancing with the one you brought, so stick to it, but most of the time there are only two times you hit driver: short holes and long holes. Short as in you can reach, and long as in you need all you can get off the tee to give you a reasonable second shot. So let’s assume the course is flat and there’s no wind. A big hitter might take driver on par-4s 300 and under, and 390 and over, but in between should be hitting less club.

5. Hitting Driver Automatically on Every Par-5

Same logic, but even more subtle. All par-5s are long, relative to par-3s and par-4s, so it is very tempting to assume you need driver. Wrong. You don’t. You hit driver off the tee on a par-5 that you might have a chance of reaching in two, and the crazy long hole that you might struggle to reach in three, but otherwise, why would you?

Amateurs lack accuracy. It is as simple as that. Without lying to yourself, ask how many times a round you hit a full approach shot into a green and find yourself left with a putt inside of five feet? Once? Twice? That’s about it for me. We are simply not good enough to attack the pin (I’m talking full shots, not pitches or chips). So think of every iron shot as a circle. The middle of the circle, the bull’s eye, is where you aim. The circle is where the ball will probably land, including every type of miss: long, short, right and left. Of course, some of us miss more to one side consistently, in my case left, so you can adjust the circle accordingly. If you make the bull’s eye the center of the green, you will hit a lot more greens, and be putting for par and birdie more often, but the catch is that the pin is rarely in the center. If the pin is front right, and you aim at it, half your circle, every miss right or short, is now off the green, reducing your chances of having a putt by 50%. You played for birdie and now you probably won’t make par. Most players attribute these “near misses” to bad luck: “I just barely missed the right edge, and now it’s deep in the greenside pot bunker. Tough break.” But you missed because you were playing at the pin, on the right, rather than the middle. Look at it this way: the reason to attack the pin is to make birdie, but if you are consistently putting for birdie from the middle of the green, even though it might be 30 feet, you are going to make some of those sooner or later, and a lot more often than you will hole the bunker shot you left yourself with by getting greedy. And along the way you will make a lot more pars. In fact, if you go out right now and play 18 and aim at the middle of every green, ignoring the flags, you might save 4-5 strokes right there.