Whisky is not taken lightly in the British Isles: the very word itself is derived from Gaelic and means nothing less than “water of life.” Once you come in from a typical round of typical links golf in typical links golf weather, badly in need of both warming and forgetting, you will understand why.

But even on the rare bluebird day, whisky is a good pairing to links golf, and in a pinch, it goes well with parkland or heathland styles as well. It is useful to calm nerves before the round, to keep strength up during, and to celebrate – or recover – after.

Whisky is made all around the world, but good whisky (with the exception of bourbon) comes from Scotland or Ireland. The biggest difference is that whisky from Scotland, where it was invented, can be called Scotch, and all other whiskies, from Ireland, Japan, Canada, wherever, is simply whisky.

The Irish, always up for being fiercely independent, add an extra E. So it is whiskey in Ireland, whisky everywhere else.

That is almost everything you need to know to enjoy “the brown” as the Irish also call it, on your next golf trip, but here are a few more important details.

Single Malt: These whiskies have become associated with connoisseurship or snobiness in the US, but few who drink them understand what they really are. Most people think of two styles of whisky: blended vs. single malts. But most single malts are blends as well. Shocked? Sorry to burst your bubble. 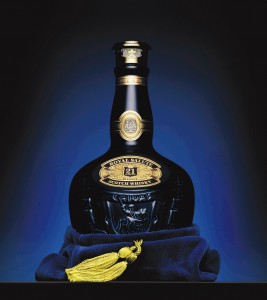 Chivas Royal Salute is what is known as an "ultra-blend." These are the finest blended whiskies on earth, and this one contains a mix of whiskies all of which are at least 21 years old. The result costs about $200.

The term single malt means that all the whiskies in the bottle come from one distillery. Think of it is as a micro-blend. The most popular single malts generally have distinct tastes: Glenlivet is pretty smooth and mellow, Laphroaig as smoky as an ashtray. Since these brands rely on and tout their unique tastes, they strive for consistency, so one bottle tastes like the next, year in and year out and you know what you are getting when you buy Glenlivet. To achieve this, a distillery mixes whiskies from its different barrels and different production runs, in a process called vatting, until the mixture tastes like it always does. Thus single malts are technically known as “vatted whiskies.”

This is why single malts do not have vintage years, like wines, but rather ages. When you buy a 12-year old today in 2009, that does not mean it was bottled in 1997. It means the youngest whisky in it (Scotland) or the average age of the whiskies in it (Ireland) is at least 12 years. That is why as the age goes to 18 and 25 years it gets disproportionately expensive. To average or have a minimum of 25, there are often whiskies more than 50 years old in the bottle.

Taste is subjective, but experts are always rating things, and for my two cents, the best single malt you can buy is The Macallan. It is so good that it is wrong to simply call it Macallan. Like “Your Highness,” it needs the extra word. Most whiskey experts agree with me. It is no coincidence that its nickname is the King of Whiskies.

Single Cask: These whiskies, once rare, have exploded in popularity in recent years, and are really what most people mistakenly think single malt is: a truly one-of-a-kind product, not blended with anything else, a whiskey that comes out fully completed from one barrel. There are two problems with single cask whiskies. Their charm is uniqueness, but like wine vintages, there are bad ones. And when they are great, you often cannot ever replace them. I have had such a bottle, three quarters empty, in my cabinet for more than ten years, because I cannot bear to finish it. Not only is it a single cask that cannot be recreated, it comes from a now defunct distillery. It is the best scotch I ever tasted but it does not matter because it cannot be replaced, ever.

Because they are hot, many distilleries are now selling single cask versions directly. But the widest and coolest selections come from independent bottlers, very patient companies whose business is buying and aging casks of whiskies from various distilleries, many of which do not even sell their own product to the public (more on this later), or no longer exist. In short, these are whiskies they label themselves that you can get nowhere else.  In Scotland there are two large ones, Gordon & MacPhail and Cadenhead’s. These whiskies are taken from single casks, and unlike most single malts, are not treated to change color or filtered. They come in a much wider variety of ages than is typical, from 8 to 40 years old. They also have unique labels, like “Cadenhead’s Glenfiddich 1972.” Because single cask whiskies are unique every year, they do bear vintages like wines. 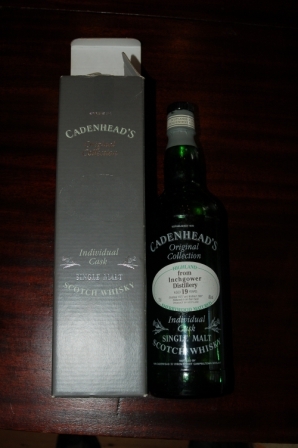 Wooded Whiskies: Another recent hot trend is the use of different wooden casks to impart new flavors to the single malt stored inside. Today oak is the wood from which most beverage casks are made, but oak is not found naturally in Scotland, so in older times distillers would re-use casks in which sherry had been imported from Spain. Once upon a time, most scotch was aged in casks that had been used to manufacture sherry. When the large English consumption of sherry declined, casks became scarce, and distillers switched to the suddenly available American bourbon casks, which are plentiful. An odd law in our country requires bourbon to be aged in virgin casks, so the barrels instantly become unusable to bourbon makers, even though they have decades of booze-making life left in them. So we ship them to Scotland and Ireland, and since WWII, most whisky has been aged in bourbon casks.

The Macallan, my favorite, was one of the very few that always remained true to sherry, even with the extra expense, and that is one reason it is so good. Its critical popularity inspired other manufacturers to return not just to sherry, but to casks from all sorts of other wines and liquors including port, madeira, Bordeaux and so on, and some versions, like the Balvenie Doublewood, split the aging between different types of casks. Most wooded whiskies are traditional single malts.

Blends: Ah, blended whiskies are the poor stepchild of the whisky word to today’s younger, richer and largely uninformed buyer. That is a shame and a mistake, because people who actually make whisky will tell you it is much more difficult to make a good standard blend, like Chivas, than a good standard single malt like Glenlivet. As with single malts, blended whiskies strive to replicate the exact same taste their customers are familiar with year after year, bottle after bottle. But in the case of blends, there may be more than hundred different single malts in the recipe in various quantities, as well as neutral or grain spirits, which are allowed to be added to blends, which is why they usually have a smoother or less distinct taste than peatier single malts. The vast majority of Scottish distilleries do not even bottle their own products: most exist simply to supply raw material to the big blenders. The master distiller is thus faced with the challenge of taking a vast number of ingredients that change in taste every year and combining them to produce exactly the same taste. For that reason, the very best blended whiskies, known as “ultra-blends,” which include Johnnie Walker Blue, Chivas Royal Salute and Dewar’s Signature, cost a lot more than most single malts, over a hundred bucks a bottle. Hell, the best French Bordeaux and champagne is blended, why not whisky?

As a side note, there are well over a hundred distilleries in Scotland, but only three in Ireland, each of which produces many different brands, both their own and under contract. The majority of Irish whiskies are blends, like Jameson’s or Bushmills, but they are typically triple distilled, whereas blended Scotch is twice distilled. Each additional round removes more impurities, so Irish whiskies are generally smoother, lighter and easier drinking. In recent years the Irish have begun producing more single malts, which they sometimes call single distillery whiskey.

One final piece of advice for your travels: while blended whiskies are enjoyable over ice, it is a travesty to add ice to a single malt or single cask whiskey. However, bartenders in the British Isles, and especially Scotland, seem to delight in doing this so they can make fun of American visitors later. When you order a single malt, do not be surprised to have ice pushed on you, but refuse adamantly. The traditional manner to enjoy non-blended whiskies is to splash just a tiny drop of water in, which “breaks” the whisky, releasing its fragrance and making the drinking more enjoyable. Usually a small pitcher is on the bar for this purpose, but the idea is not to make a mixed drink. I often take a straw and dip it in the water, cover the top and then pour it in my scotch. An eyedropper works well too.