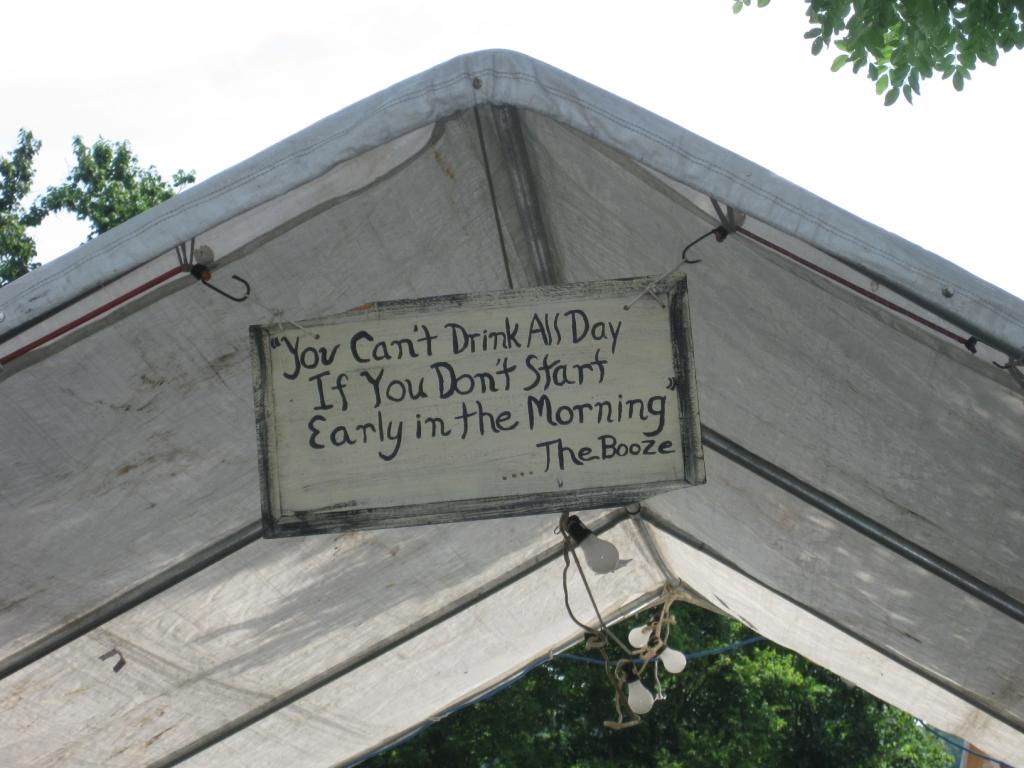 I love all things barbecued.

That’s reason enough to play golf in some places. Teeing it up on Mississippi’s Gulf Coast, for instance, is a decision made much easier by the nearby presence of not one but two venues of The Shed, a world class barbecue joint. Ditto for any golf course in Austin, TX, home to a formidable array that includes the Salt Lick, Rudy’s and many others. In fact barbecue is becoming so popular and so widespread, that I know fanatic places to choose everywhere from New York City to Venice Beach. Ribs, brisket and pulled pork are all awesome 19th hole choices, and in a pinch, they’ll work after the turn or even for breakfast.

But I recently learned a lot more about the connection between BBQ and golf when I was invited to be a celebrity judge at the New England Championships of Barbecue at the Harpoon Brewery in Windsor, VT. Harpoon is a very popular Northeastern micro-brew with breweries in Boston and Vermont, and they run lots of special events, including Oktoberfest celebrations, charity bike rides and running races. But the NE Championship of BBQ is the biggest deal of all, attracting thousands of hungry spectators and dozens of top teams from throughout the northeast, which has better quality than you might expect, In fact, in 2009, one Harpoon participant, IQ (get it? They all have clever names like this) out of Massachusetts won eat grand daddy of them all, Jack Daniels World Championship Invitational in Lynchburg, TN as the country’s finest competition barbecue team. 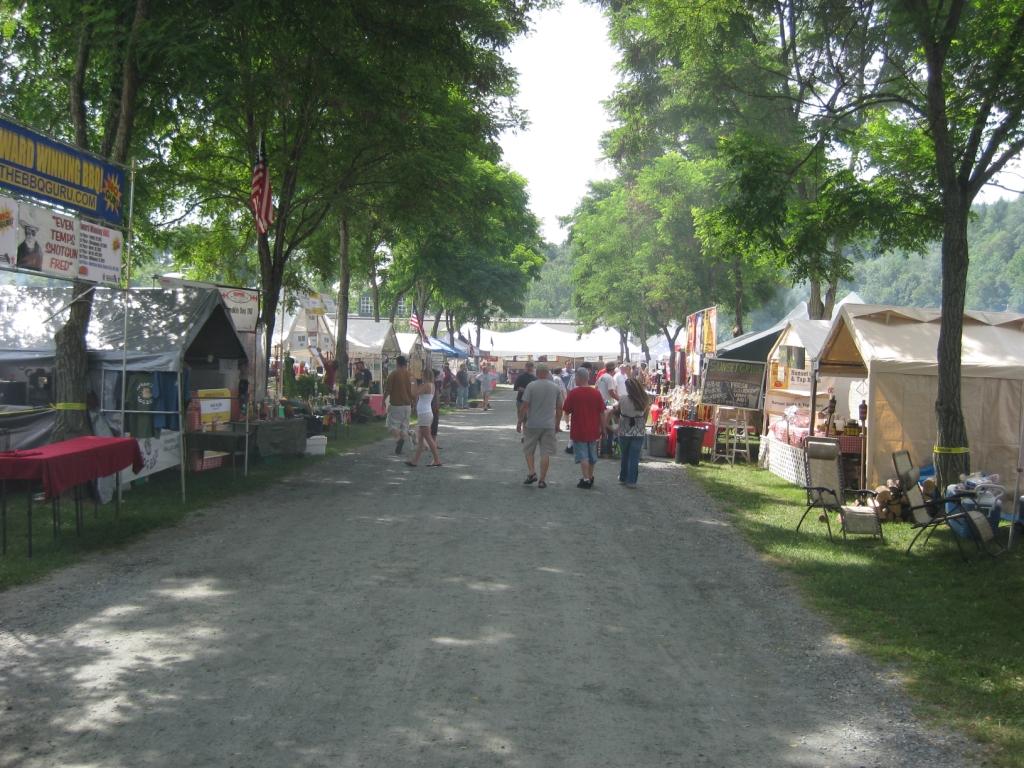 What to choose? The Harpoon New England BBQ Championship featured rows and rows of smokers and booths.

You have probably seen similar deal on TV, now that the Food Network, Discovery and the Travel Channel devote ample space to hog wild eating shows.

So where’s the golf connection?

Well, as I learned, the competition barbecue circuit is about as different from backyard grilling as the PGA Tour is from my game. They operate under strict rules, like golf, and apparently every crazy thing that could happen has, because just like golf, which has hundreds of pages devoted to Decisions on the Rules of Golf, barbecue judging rules are extremely detailed, covering every possible scenario. For instance, as I learned, if a judge goes to take a sample out of the provided sample dish, and two pieces, say two ribs, stick together, they both must be removed, cannot be separated, and if that means one judge at the table gets no sample, he is obligated to score it a 1, which means disqualified. Yes, barbecue rules are just as whimsical and capricious as the USGA!

And while there are barbecue associations in every state and region, and this one was run by the New England Barbecue Society, they all operate under the auspices of the national ruling body, the USGA. No wait, that’s golf. It’s the KCBS – Kansas City Barbecue Society. 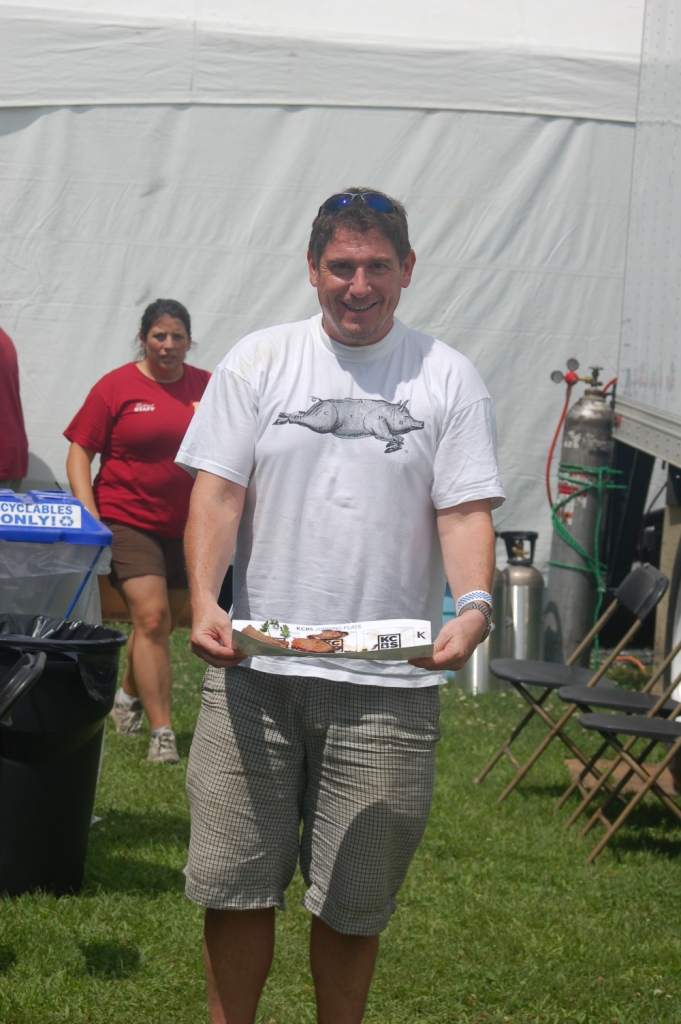 Want to be a barbecue judge? The pay is nothing, but the fringe benefit is lots of great food, so much you’ll leave bloated, plus extras such as free admission, VIP parking at competitions, free beers and a cool badge. To get on the circuit you have to take a sanctioned weekend long rules course – not unlike becoming a USGA rules official. Barbecuen is one ultra informative site about all things BBQ, including rules, judging and a detailed national calendar of events.

The event I judged was a big one but still local – sort of like the Quad City Classic. Like golf, competition barbecue has four Majors and these are the ones that make or break careers. They are:

Here is a very brief recap of what I learned:

The KCBS officially sanctions four categories: beef brisket, pork ribs, chicken and pulled or roast pork. These are the Holy Grails of barbecue. On Sunday they do specialty categories like wings, less prestigious. Each judge tastes 6 portions of each food (24 servings in all!). Like a wine tasting, you don’t have to finish the sample, and you rinse between bites with water and crackers to clear your palate. Rules stipulate that no beer is allowed during judging, but unwritten rules stipulate that a whole lot gets drunk afterwards.

All the samples and tasting are done double blind, using a numbered code, so before, during and after you never find out which competitor prepared what you ate. This sort of sucks – after the judging I couldn’t help my wife and friends decide what to buy, because event though I loved rib #2, I could never find who made it. Even when the winners are announced, as a judge, you don’t know if you voted for them.

Otherwise a local or national barbecue contest is great fun, as a judge or spectator. You get to sample lots of really good barbecue all in one place.

Next: My favorite barbecue in big time golf destinations. 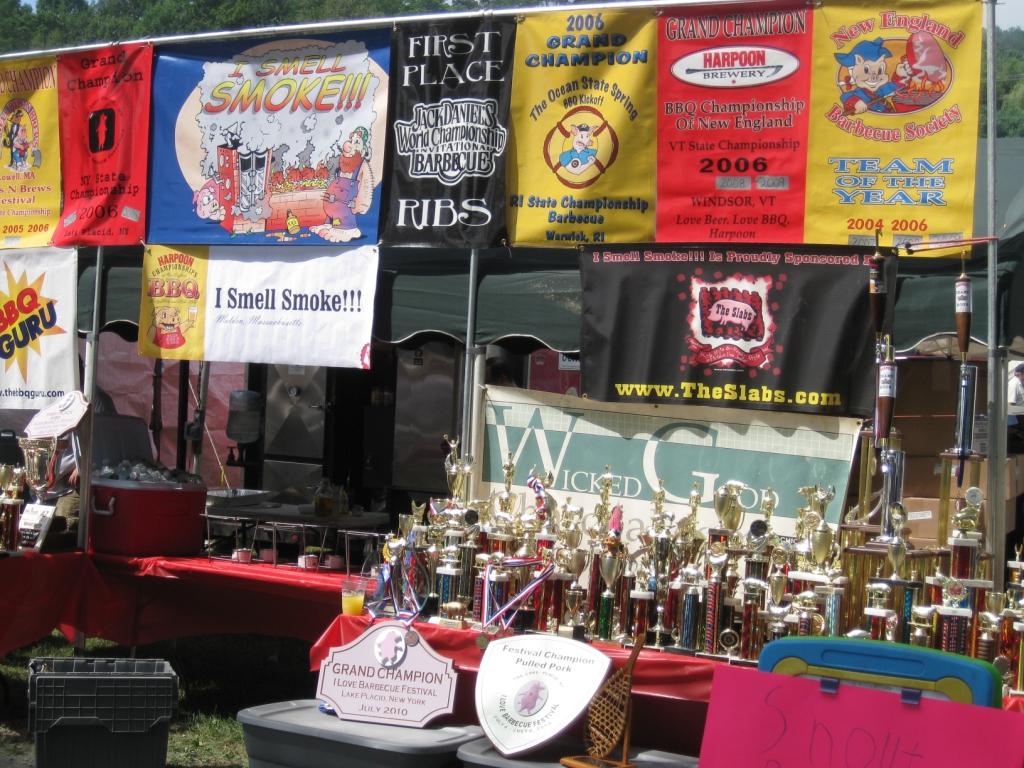 You can't judge a book by its cover, but when choosing vendors at a BBQ contest, trophies go a long way!