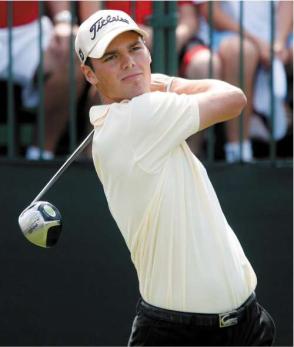 Is Martin Kaymer Number one in the world or Number Two? Find out here.

For decades such mathematic conjuring has been the sole province of the “Official World Golf Ranking,” which is an independent entity whose formula and ensuing rankings are endorsed by all Four Major Championships, the PGA Tour, and the five other tours that combine to form the International Federation of PGA Tours. In short, it is endorsed by the people who run professional golf tournaments at the highest levels.

But the fairly static rankings have raised an eyebrow in recent years, especially when Tiger Woods managed to retain his number one in the world status for over a year after winning his last tournament, and with little other success. One reason for this apparently odd phenomenon is that the results of each tournament are weighted subjectively based on “strength of field,” and the four Majors are weighted even more, and for many years Tiger only played in – and won a lot of – big events, making his ranking strength disproportionate to his actual number of victories (though he had plenty of those too). This gave him a big cushion, big enough so that it took more than a year for the people who kept winning other tournaments, mainly Lee Westwood, and more recently Martin Kaymer, to catch him.

I’m going to interrupt myself for a second and make a shout out to me: I was the first prominent golf journalist in the US to proclaim Martin Kaymer the next big thing, while everyone else was jumping on the various Anthony Kim, Camillo Villegas and Rory McIlroy bandwagons, and not only was I right, but I was right in a huge way. It has taken Kaymer just one year to move from European Tour Rookie of the Year to Major Champion and the number two ranked player in the world. Or according to Sports Illustrated’s new ranking, Number One. I hate to say I told you so, but I told you so.

Sports Illustrated decided it had enough with the fact that “During 2010, Tiger Woods remained No.1 in the official world golf rankings for a majority of the season without winning a tournament and finishing in the top 10 only twice,” as its press release reads. So, starting today, February 1, 2011, SI’s weekly meeting of its golf writer panel has launched its own ranking system to finally compete with the Official World Golf Rankings – or at least make things even more confusing. While the Official rankings are updated every Monday, SI has opted for Tuesday. This sounds good in theory, but there is one caveat: this is the same group of golf “experts,” who nonsencially declared it easier for a PGA Tour player to shoot 59 than for an LPGA player to win two Majors in one year, which is both clearly wrong and factually wrong.

Still, I like the concept and the competition. The SI release reads: “After last year, we wanted to see what a more up-to-the minute world golf ranking would look like,” said Jim Gorant, Sports Illustrated senior editor. “Our weekly poll will give fans a much clearer picture of which athletes are truly playing the best golf in the world.”

The results are similar but different enough to raise eyebrows in the golf world. For example, while the long established ranking has Tiger third in the world, SI has him tied for tenth – a huge drop. They have different number ones, also real news, and SI dumped Luke Donald from its top 10 in favor of Matt Kuchar and Dustin Johnson, both of whom I am guessing are now fans of the new system. In fact, the only things they agree on are that Phil Mickelson is fourth and Steve Stricker sixth.

Just to give you an idea, in its first week, here is how to the two Top 10 lists compare. Which do you like better?