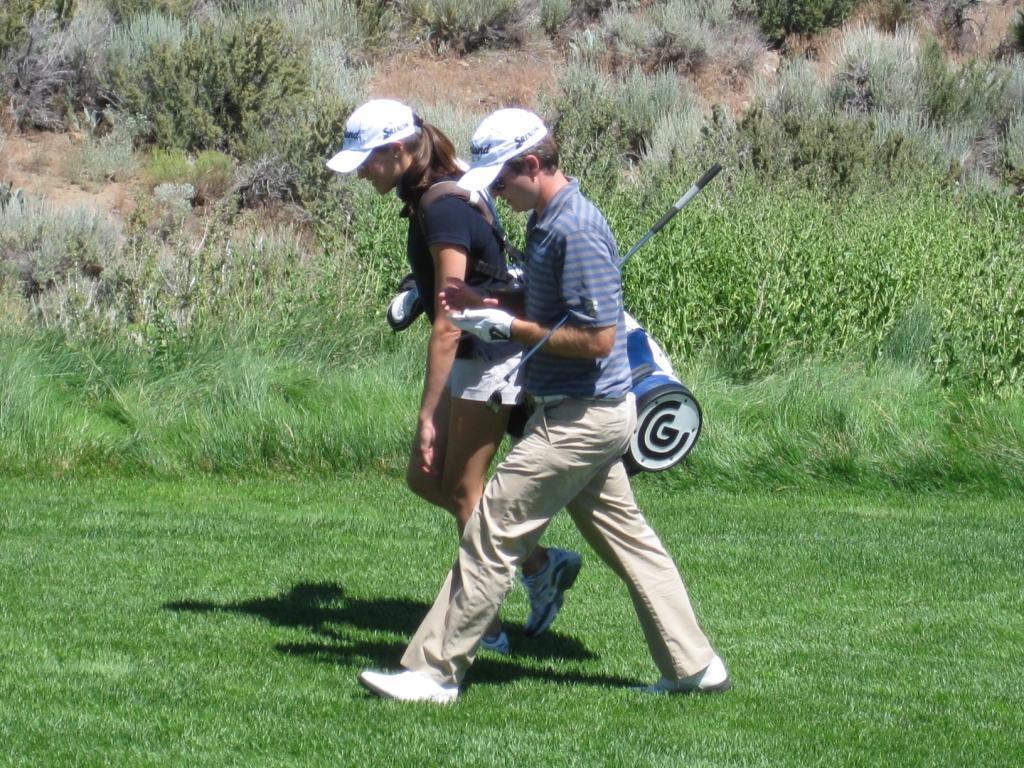 Kevin Streelman, with his wife as caddie, playing with me in the pro-am of the 2010 Reno Tahoe Open.

After playing with him in the pro-am of the Reno Tahoe Open earlier this summer, I wrote about why I have jumped on the Kevin Streelman bandwagon of well wishers and expect the young relative newcomer to the PGA Tour to make some noise. He hits the ball really, really well, even compared to most of the PGA Tour pros I have played with, all of whom hit it in a way that is hard to believe.

So I was quite happy to see Streelman in a close second place after Friday’s round at the Barclay, even as several much more acclaimed pros failed to make the cut. Streelman hung tough in there and ended up finishing the tournament third, and while it was not the breakthrough Tour win I am sure he is eager for, it is the best finish of his nascent career, and an impressive showing against a crowded and talented field, and hopefully a big confidence builder.

Also of Barclays note, I am sticking to my guns and my ongoing prediction that Tiger will be back, and as Tiger-like as ever. It was his best outing in recent history, with two typically Tiger rounds, including his first journey to the top of the leaderboard in almost a year, since he won the Australian Masters last fall. He opened strong and finished strong, and while he struggled in the middle two rounds, it was his balky putter, not his swing hurting him, which is a much more short term problem of someone like Tiger and a much easier fix. In fact, if he made a few of the “easy” putts (for him, not for me!) he missed, he might have gone wire to wire.

In any case, so many folks in the golf biz have written off Tiger his year that I can’t wait to say “I told you so.” Except that I know the media, and when he does win again, all the naysayers will backpedal and loudly proclaim that it was only a matter of time and they knew all along. Watch. It will happen. Probably soon.