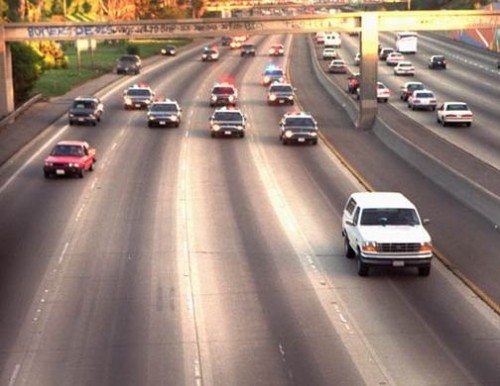 If you see this white Bronco heading towards the clubhouse parking lot, maybe you should tee it up elsewhere.

Golf is a humbling game, and one that makes most people who play it look sort of stupid. Celebrities do not like to be humbled, and they don’t like to look stupid, yet many of them are drawn to the game, just like the rest of us, because golf is fascinating and addictive. Yet only a few celebrities truly pull it off, and look good playing golf, and make golf a part of who they are, like Steve McQueen did for fast cars and motorcycles. Bob Hope, Bing Crosby, JFK and Alice Cooper all come to mind as celebrities who play or played golf and for whom it was the right thing to do.

Then there are folks like ex-president Gerald Ford, who became more famous for hitting spectators than fairways. While many say he wasn’t half bad and was unfairly portrayed, that’s the nature of the beast, and for him golf was an embarrassment rather than an accolade. So maybe for his own good, Ford should not have played.

But then there is a class of celebrity who just should not play for the common good. This is too bad, because the golf industry is in dark days, and we need to grow the game, and normally I would embrace every single person who wants to buy clubs and tee it up, since we could use the help, but at some point you have to draw a line in the sand. Here is my line, and my list of ten celebrities who I hope never play golf.

1. W. Axl Rose: No one loves Guns n’ Roses more than me, I’ve been a longtime fan and saw them at their height, when they still had Slash and Duff and the original guys. But I just finished reading Stephen Davis’ rock biography Watch You Bleed, and apparently G n’ R’s front man is bipolar, disposed to sudden and uncontrollable outburst of extreme anger and violence, and prone to breaking expensive things, and we don’t need (more of) this in golf. Plus, he is infamous for always being very late for concerts, and I hate slow play.

2. LeBron James: Golf has enough talented but underachieving prima donnas, but at least in golf you can’t be overpaid – you only get the big check when you actually win something. Plus, it’s really annoying when your playing partners talk about themselves in the third person.

3. Sarah Palin: First, they close golf courses when it snows. Secondly, golf is a global game, so you should know what other countries are. Third, the point of the game is not to kill anything. Fourth, if we need someone to talk to on the course about US government, foreign policy, Russia or what the Vice President does, John Daly would be a much more knowledgeable and accurate source.

4. Justin Bieber: For the sake of sun safety you should wear a hat when you play golf, and once you lose to little kid ‘do that makes 12 year old girls swoon, well, there’s nothing left and he’s no longer a celebrity. Besides, golf already has to live with Justin Timberlake.

5. David Blaine: He’d probably just lock himself in the on-course bathroom for a few weeks without food or water, then call it “magic,” and try to make it into a TV special.

7. Paris Hilton: They won’t let this ex-con into Japan and that’s good enough for me.

8. Angelina Jolie and/or Madonna: They’d probably just grab some kid and flee the country while I’m trying to putt out.

9. Steve Jobs: He shouldn’t take the time to play until he makes the iPhone work. Besides, no matter where he plays there’s a good chance he won’t get any reception from AT&T.