The game of golf has a lot to answer for: complex rules, white belts, high levels of frustration and profanity. But at least when you play, you’re out in the elements, interacting with the natural world.

“The mainstream golf world doesn’t grasp the idea that there are a lot of rounds of golf being played indoors,” said Bill Bales, the founder and CEO of aboutGolf, one of several companies which design and manufacture golf simulators. “They don’t count these rounds, but they’re wearing golf shoes, using their clubs and balls, having a satisfying experience playing against each other and by themselves.”

Luke Donald is one of them. Currently ranked 10th in the Official World Golf Ranking, he lives in Chicago and put an aboutGolf simulator in his home a year ago. “I use it in the winter as a way to practice, simulate real golf, and play some golf courses that we play on tour,” he says. “You can work the ball left to right and right to left and it’s very accurate.” 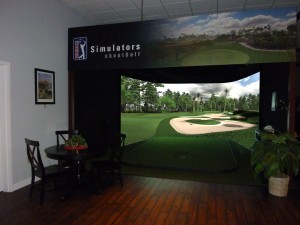 That’s a pretty good endorsement, and there are other signs of success: the sims are big in Korea and other parts of the Far East, for example. There is a residential market for those who, like Tour pro Mr. Donald, can afford the $50,000-60,000 price tag. But Mr. Bales and his fellow entrepreneurs also have their eye on driving ranges, golf shops, teaching pros, recreational centers, and the occasional bar and grill.

“I really think we can grow the game of golf beyond the circle of current golfers by creating this thing that is like the game outdoors, but you can do it at night, you can do it for an hour, you can do it without anyone behind you trying to hurry you along,” says Mr. Bales.

Golf simulators have been around since the early 1970s. They were amusement park novelties, tucked in the back of a retail shop or in a forgotten corner of a golf center. Today, the technology has improved vastly.

“The hardest thing to do is to convince someone who played in a sim 15 years ago to come and check it out,” said Ken Reynolds, whose company, EverGreens Golf, became an aboutGolf dealer after operating an indoor golf center. Those antediluvian machines featured grainy photos of a course projected onto a simple screen; you whacked a ball into the screen, a device measured the time it took for the ball to pass through two points, and after calculating and extrapolating, it told you your distance and transported you to your next location.

Today’s most advanced simulators put you in a true 3-D environment, as though you’ve been transported physically into an ultra-high-def video game. Stereoscopic cameras are trained on the hitting zone, where they record club speed, ball speed, launch angle, and all components of spin. The flight of the ball, projected into the virtual course in the time it takes the ball to hit the screen, replicates the shot that would result in the outside world with remarkable precision. 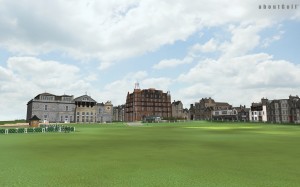 Full-swing simulators have to serve two distinctly different purposes: entertainment and performance. The entertainment side is on display at the indoor centers that are springing up around the country. For some, golf leagues have taken the place of bowling leagues for an evening’s recreation; there are couples’ leagues, skins games, match play, all on simulations of great courses around the world. Brad Lefebvre, Chief Development Officer for the Crosswoods Indoor Golf Centers in the Phoenix area, travels with a group of friends who use the simulators to familiarize themselves with places they’re planning to play.

“I can bring a client in and we can play in two hours,” says Mr. Lefebvre. His leagues attract golfers looking to avoid the blistering summer heat and occasional winter rains. “It’s the first time in my business life I pray for bad weather.”

But it’s the performance side where things have changed the most. The old simulators were notorious for simplifying ball flight. The swing that gave you a big drive down the fairway indoors might produce a duck-hook on the course; the machines were useless for serious practice. Today, they provide all the feedback a golfer can handle, with angles and velocities for every shot.

Retailers have found them useful for club-fitting. More than 85% of all clubs are purchased at off-site retail outlets, in a process Mr. Bales calls “FMWAI,” pronounced fim-way. It stands for Five Minutes With An Idiot. An accurate simulator will provide the necessary data for an accurate fitting, even when operated by a temporary employee at a chain store.

There’s also teaching. “We had one kid who didn’t hit the ball high enough to get out of chutes and over trees,” says Dave Hollinger, men’s golf coach at the University of Waterloo in Ontario.  “He worked all winter on getting his ball flight right, and he reached the round of 16 at the U.S. Amateur Public Links championship, and finished seventh at the Canadian Amateur.”

Then there’s self-instruction, perhaps the biggest market of all. Only 10% of golfers take lessons, and if most golfers practice at all they must work on their own.

What do simulators do best? On full shots, they deliver a good measure of realism and accuracy. But roughly half the shots in a round of golf are played from within 50 yards of the hole, and it’s here that the indoor game requires some large mental adjustments.

On touch shots like pitches and chips, golfers generally pick out a target visually and play the ball to that point. On a simulator, you have to play from information instead of what you see. If you’re 30 yards from the green, you have to develop the feeling of hitting the ball 30 yards; it becomes a question of muscle memory rather than hand-eye coordination and judgment.

The putting elements have improved, but they call for a similar adjustment; you have to learn how softly to stroke an eight-foot putt towards a hole on a screen 25 feet away. The good thing is, we can all use more time practicing eight-foot putts, but it’s difficult to hold onto that feeling when you go back outside and face a whole different set of sensory inputs.

No simulator can prepare a player for the variety of lies and ground conditions he’ll find on the course. Every lie on an artificial mat is level; uphill, downhill, and sidehill lies require knowledge and practice you can’t get indoors. Some simulators deduct distance for a shot out of thick rough, but that does little to help you learn how to hit it. The same goes for hitting from the sand.

Mr. Bales acknowledges these shortcomings, while enthusing about “trajectory physics” and “aero coefficients.” On the company’s test range, he is seeking “sub-millimeter accuracy in pinpointing the position of a ball in space. When we have all that data, then we’ll have the Holy Grail of simulator accuracy.”