– The Zone at Twilight –

Inside each and every one of us is our true, authentic swing.

Something we was born with, Something that’s ours and ours alone,

Something that’s got to be remembered.

The trick is to find your authentic swing,

somewhere within the harmony of all that is, all that was, and all that will be.

The Legend of Bagger Vance 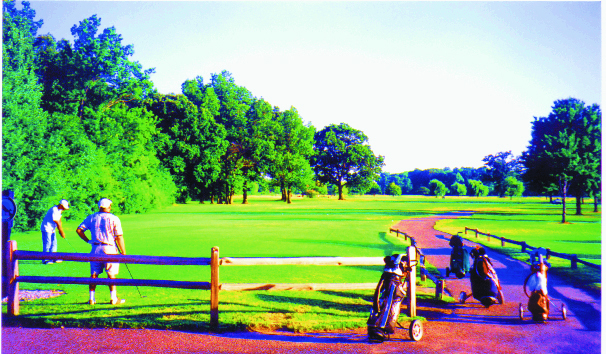 I learned to play golf at Palmer Park in Detroit, Michigan. In the 1960’s, this former country club bordered by a 300+ acre forest, was one of the most exciting places on Earth. Adjacent to Detroit Golf Club, its woods were home to deer, rabbits, possums, raccoons, ducks, geese, and songbirds. To a young boy, Palmer Park was a very enchanting place.

In my youth, Palmer Park was also a nexus (gathering place) for Detroit’s growing multi-ethnic middle class, and thriving Afro-American golf community. The upscale Palmer Woods neighborhood next to it was home to prominent business people, doctors, dentists, lawyers, engineers, artists, teachers, judges, & elected officials – everybody who was anybody.

Palmer Park was a true melting pot, and one of the few places in America where all classes, races, and sexes truly played golf together. Palmer Park drew the top amateur golfers of all races and cultures, as well as local police, firemen, and autoworkers. Many celebrities played there too including boxing legend Joe Louis, Motown founder Berry Gordy, composer Norman Whitfield, singing stars Smokey Robinson and Marvin Gaye, as well as sports stars Dave Bing (basketball superstar and current Detroit mayor), and Lem Barney (football superstar and hall of fame).

I began golf and martial arts at the same time (age 9) and intuitively fused them together. One day, at the age of 12, while doing some karate movements before teeing off, my playing partners that day, Marvin Gaye and Smokey, nicknamed me ‘Karate Pete’ that they shortened to ‘Karate’.

Palmer Park was also home to local entrepreneurs who also had the leisure time and the money to play golf. And as a result of these colorful characters, Palmer Park was nationally known as a ‘hustlers’ golf course, and featured in a June 16th, 1966 Time Magazine article titled ‘Soul Golf’.

Many of Palmer’s hustlers came from the Southern United States where they learned to play as caddies. They all had colorful nicknames like ‘Georgia Boy’, ‘Hawkeye’, ‘Tennessee’, ‘Pepsi’ (shorten version for his hometown of Pensacola, Florida)’, and ‘Mississippi Junior’. Palmer’s cast included ‘Rev’, reverend Ralph Hart (who is white, but vibes black). ‘Rev’ usually played with ‘Prime’, (so named because he looked like the Prime Minister of Nigeria), ‘Little Oscar’ (who was nearly 5 foot tall but played like he was 10 feet tall), and ‘Sugar Jim’ (so named for his huge heart and sweet demeanor). ‘Rev’ shouted, “Heavenly Days” after every good shot. Without doubt, ‘Rev’ was/is anointed by the Holy Spirit, for voice carried very far, and his joyous Southern twang was always inexplicably uplifting.

Nearly every afternoon from the spring through fall, the ‘5 O’clock Train’ would depart from the first or tenth tees. This ‘train’, composed of a dozen or more foursomes, paid ‘Little Oscar’, (the conductor) a $5.00 fee that formed a cash, ‘kitty’, that the lowest scorer would win. This sum was very small compared to all the numerous side bets that, at times, reached $100,000 for nine holes. Every summer the best African-American tour professionals visited Palmer on their way to the PGA Tour’s Buick Open.

As a youth, it was thrilling to stand in the gallery behind the first tee watching these great players launched drive after drive far into the distance, then to follow the action as they battled around the course. It was Palmer’s ‘Golden Age’. Being raised around such skilled athletes, in such an idyllic setting, and at such a perfect time created a confluence that changed my golf and life forever. For, on one particularly glorious July afternoon in 1966 — as I happened to be in the right state of being, in the right place, and at the right time — a door between two worlds opened before me, I intuitively stepped inside, and traversed the Zone at twilight. 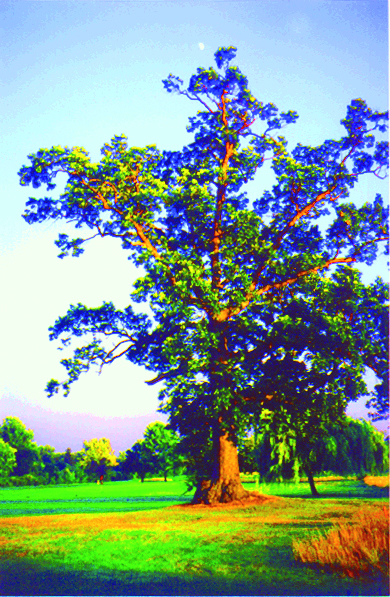 In Michigan, during the heart of summer, twilight seemed to last forever. In the late afternoon golden sunbeams illuminated the corridors of towering Dutch Elms that guarded the fairways, highlighted the flags on distant greens, and bathed the subtlest contours of Palmer’s golf-scape in shadow. After the 5 O’clock train had departed, I teed-off alone, under a bright blue sky. I played the first three holes in even par. I was happily content, enjoying, in solitude, the beauty & tranquility of the golf course.

Just before sunset I arrived at the 4th tee. The 4th hole is a 340-yard dogleg that angles right. The fairway is aligned to the East, so that in the late afternoon the setting sun illuminates the flight of a white golf ball in contrast against the blue of the sky. Thick woods border the entire right side of the hole. And the green is tucked into a cul-de-sac of trees that form a cathedral-like canopy above. Into this idyllic setting I stepped, and hit an absolutely magnificent 3-wood just past the corner of the dogleg.

As I approached my ball I began to hear and feel a soft humming vibration that seemed to emanate from the forest. The air began to sparkle with tiny flecks of scintillating light. This vibration increases in intensity, then deepened, bottomed out, and disappeared into silence… like the sound of water running flat. Goosebumps appeared on my arms, my belly tightened, and my body tingled as energy spiraled through me from the soles of my feet to my crown. As the energy channels in my body opened wider, I surged with power. And for the first time in my life, I physically experienced the ‘Ki’ energy my Karate Sensei (teacher) had spoken about.

After I reached my drive and prepared to hit my second shot, a full pitching wedge to the green, I became enveloped in silence, and my mind came to a standstill. I focused on the spiral in my belly, coiled tight to the top of my swing, and effortlessly uncoiled through impact. The energetic sensation at impact felt like lightening! My shot flew high and straight, landed below the flag, and rolled into the cup for an eagle!

As I walked to the elevated tee of the 5th hole, a straight, 275-yard par-4, I bristled with energy. As I prepared to hit, silence enveloped me. My mind came to standstill. I coiled tight then unleashed through impact. Craaaaack! My drive leaped into the sky and disappeared in the dusk. As I approached the green, I saw my ball next to the flag. A second eagle two! 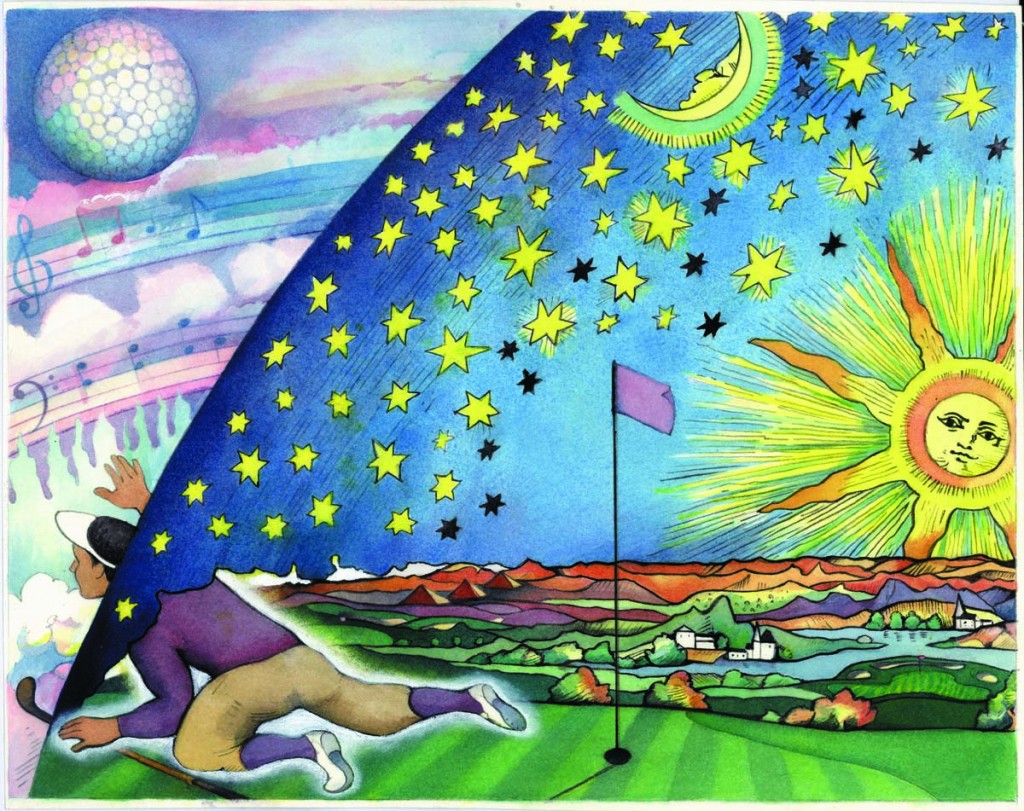 The Zone at Twilight

As twilight deepened, Palmer Park took on an enchanted quality and appeared lustrous with great depth of field — as if it was underwater. A luminous, iridescent web-like matrix of light appeared to interpenetrate my body, the golf course, forest, and evening sky. The sunset’s colors glowed more brightly, richly, deeply, and vibrantly than usual — in a palate of ethereal pastels like a Maxfield Parrish watercolor. Palmer Park glowed in translucent radiance. As I walked through the avenue of sycamore trees between the 5th green and the 6th tee, I began to faintly hear the Sound Current. A herald of muted horns rang out far, far in the distance, as a delicate whisper of strings, flutes, and woodwinds floated upon the evening breeze. A celestial choir swelled and soared high above, then dissolved into the twilight. This music pierced me like a cold wind.

Playing in this magical in-between, at twilight, I birdied the 6th, 7th, and 8th holes, then nearly aced the par-3 9th hole, when my tee shot hit the base of the flagstick. I had played the last six holes 8-under par, effortlessly, magically, hitting shot after shot, after shot, in the sweet-spot.

After I left the 9th green, I paused next to the first tee to watch the last colors leave the sky, and the first stars appear. As I walked to the bus for a short ride, home my body tingled with energy as I recalled my play. This transcendent high and its afterglow lasted late into the evening, and followed me to the edge of sleep. That night I dreamt of flying. I still remember soaring — wings outstretched — the wind rushed past my face… as I look down on Palmer Park, and the 4th hole, far below me…

Suddenly, I am roused from this reverie by a golf course marshal who informs me that it’s closing time. I snap back into present time. It’s 1991, and I’m still sitting next to #18 at A.S.U.  Night has come. The sky is dark and filled with stars. I slowly get to my feet, walk to the parking lot, get in my SUV, and drive home. It’s past 9:00 pm when I arrive at the abode of my host and best friend, Mitch Ballou. I am so utterly stunned at what I’ve just witnessed Tiger do that I don’t bother to eat, or to shower. I just sit on the sofa in Mitch’s front room in total darkness — totally dumbfounded — and stare off into space. Tiger not only did things I’d never seen — and I’ve seen a lot — he did things I never imagined. When Mitch and his girl, Alexia Adams, arrive home well after midnight, they find me still sitting in the dark staring off into space…totally blown away.

The next day I call Earl at his home in Cypress, California. As a player I want to know more about Tiger’s Inner-Swing, Hyper-Drive, and how to launch my shots deep into Hyper-Space. And as a teacher I want to know how and where they learned it. As he speaks about Tiger, and his Green Beret-based philosophy of golf as a martial art and form of combat — The Art of the Warrior — our friendship and my training with him begins.