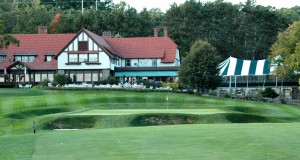 A view of the 18th and clubhouse at dusk.

What New England course hosted the inaugural Ryder Cup Matches together with both a Men’s (1925) and Women’s (1960) U.S. Open?  If you knew it was Worcester Country Club, you would be one-up on most golfers.  The United States won that first Ryder Cup and 9 to 2, Willie MacFarlane beat Bobby Jones by a single shot in a 36-hole playoff, and Betsy Rawls prevailed in the Women’s Open.  This 1914 Donald Ross design with Geoffrey Cornish modifications still ranks as a fine test of golf.  Other than the touring professionals and scratch amateurs, one should not be put off by its 6,422 total yards and par of 70.  With many uphill holes and elevated greens, that yardage plays much, much longer.  The challenging greensites, undulating fairways, and swift greens combine for a championship flavor on a modest frame; one known to embarrass many an accomplished player.

The Course was graced in its 1914 Opening Dedication by having the immediate past President of the United States and avid golfer, William Howard Taft, have the honor of striking the first drive.  He fashioned a mean “duck hook” some 125 yards down the fairway, but with several mulligans was able to improve upon that.

Incidentally, it was on the 11th hole that Bobby Jones called a “famous penalty” on himself in the 1920 US Open when only he saw his ball move in the tall rough.  And yes, Willie MacFarlane would go on to win that title by a single shot in a 36-hole playoff.  For Jones this was obviously the only way the game was to be played – with integrity, but it remains a defining moment in the game.

The meat of the test may reside with the five par threes; all presented in the first 13 holes.  The 232-yard fourth is the opening one-shotter playing from an elevated tee to an elevated, severely sloping green.  Anything sloppy leads to bogey or worse.  The 161-yard downhill tenth is the shortest, but with its green sandwiched among sand and trees, you had better hit the green.  The 196-yard 13th rivals the fourth as the most challenging par-three. It is these elevated, undulating greens that are Worcester’s signature, being tough to hit and even tougher to putt.  Challenging par-fours at nine, eleven, twelve, and the 462-yard 17th keep the long game on.  Even the 326-yard 18th is not a pushover.  All uphill, the hole plays more like 390 yards and has deep fronting bunkers guarding the blind approach to the green.  Worcester is yet another of architect Donald Ross’ gems sprinkled around the New England countryside that you’d enjoy discovering just as if you found a treasured first-edition in a used book store.  All in all, Worcester is a solid hilly layout whose character and charm match its illustrious history. 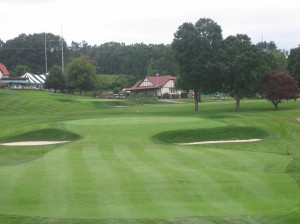 Fagan Grade – B+. Worcester is actually an outstanding old course, one of the best regionally that has continued to be not only a beautiful, but engaging and challenging layout to this day.  Its Donald Ross design is reflective of the genius he brought to golf course architecture in the Northeastern United States and beyond.