Alas, I won’t be at the Masters this year, so I’m going to have to try to get into the mood with some memories of Masters past.  I’ll be posting daily.   Here’s hoping these recollections help put you in a Masters frame of mind. 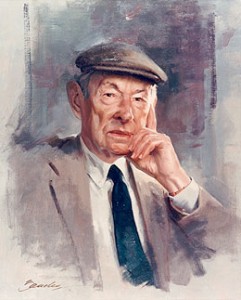 I’d always been an admirer of Herbert Warren Wind, and when I covered the Masters, I tried to keep an eye on him, to see how he managed to follow the tournament.    As far as I was concerned, he and Dan Jenkins were the two definitive scribes of the Masters.  Wind took the high road and Jenkins took — well, he took a lower road, but he was dead solid funny.

Wind was always easy to spot — he was the small man in the seersucker suit, usually carrying a shooting stick when he was on the course.   Unlike Jenkins, he seemed to keep mostly to himself; he liked to establish himself in a place where he could watch several holes through his binoculars.  I rarely saw him talking to anyone, and only once did I hear him venture a strong opinion.   That was during the playoff in 1987, when he climbed into the press seating that overlooks the 11th green.

Norman was safely aboard the 11th green, and Larry Mize pushed his approach right.  To most of us in the press seating, his chip shot looked dangerous.  The hole was on the far left, and was playing to a green that ran quickly away from him.   It wouldn’t be easy to stop it.   The consensus of the quiet murmurs was that Norman held a serious advantage.

While Mize was appraising the shot, Wind offered his opinion.   He wasn’t speaking to anyone in particular, but he said, “I think he can make this if he bounces it twice in the fringe.”

Wind spoke mildly, but it was a bold call — and an accurate one.   Mize played the shot exactly as Wind had predicted. It bounced twice in the fringe, settled down on the green, and made a beeline for the hole.  The ball had plenty of speed when it hit the flagstick, and would surely have rolled several feet past, probably to the edge of the green, but it hit the hole dead center, and Mize was the 1987 Masters Champion.

Mr. Wind took his time climbing down from the bleachers.  I hung back while everyone else started streaming up the hill, but I couldn’t nerve myself up to speak to him.   I knew that any question I asked would have been a dumb question.   He seemed in no hurry to get back to the press building (in those days, still a Quonset hut with manual typewriters).   Instead, he strolled along, taking in the scene, the long shadows streaking the greens and fairways of Amen Corner — a stretch of holes that he’d named — and he was smiling a faint, Cheshire Cat smile.   In the shock and excitement, he was the one observer who didn’t seem surprised.