How tight is tight?   I found myself thinking of the late Detroit weatherman, Sonny Elliot for the right analogy.   How ‘bout “Tighter than the rubber bands holding up old Aunt Nancy’s knee-high hose?” 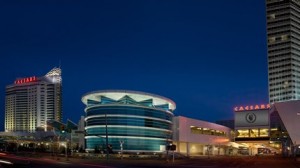 That’s my impression of Caesars Windsor casino in Canada.   I’ve now visited and played at least a half-dozen times and only once left as a $100 winner – and that was the result of a few lucky random pulls on a penny slot after a show.  Throw in the $4.75/4.50 to traverse the tunnel each way, plus the sometimes-long lines at U.S. or Canadian Customs, and it makes an evening visit to Caesars Windsor from the U.S. a debatable proposition.

Unfortunately, although a biggie, the casino payouts are one of the few downers at Caesars: 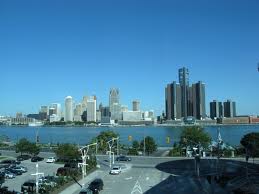 And outside of my other Caesars Windsor complaint – the afterthought tables in the large hallway outside of the Pronto Cafe for on-the-move diners (really unappealing!) – its tight slot payouts are the biggest drawback.

On my latest visit with my sister, I lost $40 within our first 40 minutes, and this was playing 2, 5, 10 and 25-cent slots.   There was little to no back and forth in small wins, which keeps a slot player interested and engaged.  A little later, I played $10 in two separate slots with only one cherry paying out two times – play $10, get a 50-cent return! Argh. My sister played $35 in two-cent machines and landed a ‘big’ $14 win, which at least buoyed her fun factor for more tries upstairs.

Upstairs, I donated another $5 each to two, quarter slots, with only one or two $1.25 paybacks in the process.  And finally, a couple of nickel slots provided some generous fun, and I won back $14 on the $10 I started with about 20 minutes earlier.  Of course, there were a lot more back and forths that provided a net gain to the casino, but that’s how they should make their money.

While I left Caesars Windsor down about $55 that day, other visits, including a couple of overnights, have left me flat.  I do remember playing quarter slots into the wee hours one night and ultimately felt like I was playing an ATM — money in equaled money back, with no big wins.  But at least, I was even. 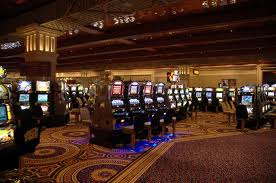 On par, only one visit out of eight or nine provided a $100 payout.  The rest either suctioned my money away (and that of my companions as well) with little fun or fanfare, or left us around even – and kind of bored.

As my sister said in the line at Customs as we left, “We’ve rendered to Caesar the things that are Caesar’s!” and when the U.S. Customs official asked if we were returning with more than $10,000, we almost burst out laughing…although it’s not too funny to consistently lose.

Loosen the belt Caesars and you’ll up your traffic and buzz.  For now, I think I’ll play more often in Detroit (especially at Motor City Casino) where my ‘investments’ produce a better return in both finances and fun!

Caesars Windsor is operated by Windsor Casino Limited under the auspices of Caesars Entertainment Inc. and Hilton Hotels Corporation.