Northern New Mexico is naturally rugged, incredibly scenic and features a wonderful co-mingling of ethnic cultures, art and history.  No place captures all of these elements of local anthropology quite like the Puye Cliff Dwellings, located just outside of Espanola, New Mexico. 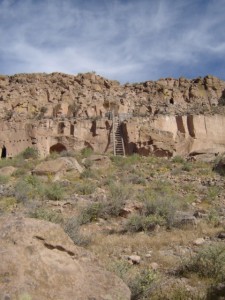 The Puye Cliff Dwellings, ancestral home of today’s Santa Clara Pueblo Indians, is an amazing National Historic Landmark.  At one time, it was home to more than 1,500 Pueblo Indians who lived, farmed and hunted game there from the late 900s to 1580 A.D.

Geologically, the Puye Cliffs are located on the Pajarito Plateau, which was formed from successive layers of basalt and volcanic debris created eons ago by Jemez Caldera volcano eruptions.  As time passed, seasonal erosion caused by wind, rain, snow and ice, carved through the volcanic debris to form sheer cliffs.  The weathering hardened the cliffs but left an easily broken surface layer with a soft underlying material that could be excavated with stone tools.

The upland mesas on the east face of the Jemez Mountains were initially settled in the 900s, as several separate family dwellings, but by 1300 A.D., these settlements converged into a few principal villages, including Puye, Otowi and Tsirege, among others.

Open year-round, the Puye Cliff Dwellings visitor site consists of the Harvey House Interpretive Center and Gift Shop, two levels of historic Santa Clara Pueblo cave and cliff dwellings along a steep rock face, with additional structural remains on the top of the mesa. The first level runs the entire length of the base of the mesa, over one mile long; the second level extends for about half that distance, and then reconstructed remains of dwellings, historic common areas and a reservoir are on top.

The Welcome Center is located just south of Espanola at the intersection of NM Hwy 30 and Puye Cliffs Road, at the foot of the sacred Black Mesa.  This is where you purchase your tour tickets, oddly enough at a Valero Gas Station that is jointly signed as the Welcome Center. From a staffing perspective, it makes sense.

From there you enter the site via the Puye Cliffs Scenic Byway, a seven-mile drive that offers sweeping vistas of the Santa Clara Pueblos’ historic lands. Arriving at the Harvey House Interpretive Center/Gift Shop, built in the 1800s by the Fred Harvey Co. as a railroad traveler’s stop, you will meet staff and begin your adventure. 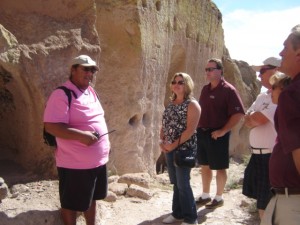 Puye Cliffs offers a variety of tour packages, from a one-stop visit to just the Harvey House that allows you to enjoy the interpretive center, purchase gifts and see the cliffs from ground level; to a 2.5 hour Adventure Tour, which takes you level-by-level to the mesa top.  We opted for the Adventure Tour.

On the day we visited the Puye Cliff Dwellings, it was sunny and warm.  With the heat, mountain breezes and elevation (about 7,000 ft), we were well advised to have sunscreen applied and carry water for our climb and tour.

Generally everyone found the climbing easy to moderate in terms of difficulty.  The lower level pathways are asphalted and handicap accessible, however, the rises between the next two levels consist of eroded rock stair steps, a ‘short’ ladder and some steeper trail grades.  Although some, like myself (Paul), hiked in sandals, a good athletic shoe is preferred. Hiking boots would be perfect.

As you ascend from the lower level up the Cliffs, you become gradually accustomed to the thinner atmosphere.  Wisely, our tour guide scheduled frequent interpretive stops, which also provided for brief rests and water breaks.

Our guide, Kevin, provided us with a very relaxed, entertaining and informative tour, covering all aspects of the settlement, with detailed descriptions of the cliff dwellers lifestyle, diet, medicines, artwork, agriculture, constructions and local history.  He even was cajoled into singing an ancient song that male tribal members would sing to the women to entertain them while they ground corn.  In fact, we learned that all of the guides at Puye are Santa Clara Pueblo descendants, which offers an added, and special, dimension to the visit.

In addition to the natural and Pueblo-created dwellings, we saw and touched chards from ancient pottery and tools, and saw ancient pictographs and petroglyphs on the rocks.  And while the tendency is to be nearly mesmerized by the historic ancient dwellings, the view at your back – looking out from the cliffs – is equally spellbinding.  Once up on top of the mesa, the 360-degree view of the southern ranges of the Rockies is simply fantastic. 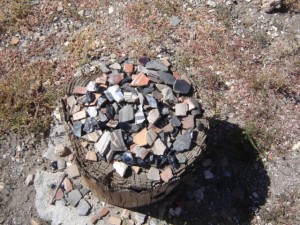 At the end of the tour, the descent is actually more difficult than the walk up, partly because it is a steeper, more direct route.  There also is one long ladder span on the way down. It is a massive, two-story, sturdy ladder, but if you have any fear of ladders, heights or are less physically able, you’ll want to take advantage of the optional van ride back down to the interpretive center. Otherwise, maintain the requisite “three points of contact” on the ladder and you’ll be just fine.

The Puye Cliff Dwellings has a reciprocity discount program with Black Mesa Golf Club www.blackmesagolfclub.com When you golf there and present your receipt for golf or merchandise at the Welcome Center, you can receive a 20 percent discount on any tour for everyone in your party. Take a one- or two-hour tour at the Cliff Dwellings and you can present your receipt at the Golf Club for $10 off golf or merchandise.  Earth and Sky cultural packages, also are available through the Santa Claran Hotel Casino. www.santaclaran.com . 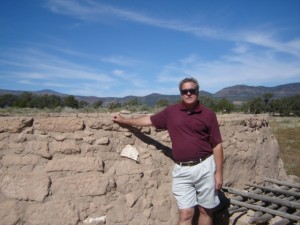 Paul Bairley atop the mesa at the Puye Cliff Dwellings.

Depending on your interest level and other planned activities, you can plan to spend anywhere from a couple of hours to an entire morning or afternoon to take in this “special place between land and sky.”

Although open year-round, there are occasional closures and seasonal hours, so be sure to check the website  ww.puyecliffs.com when planning your visit.