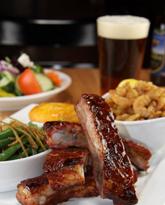 Flavorful, tender and (almost) all around good.

With its stylishly trendy décor, this barbecue restaurant surprises with its old-style slow cooking to create some wonderful pulled pork and beef brisket, plus tasty sides.   Tender and full of flavor, I enjoyed both meats as part of the Classic Combo, which for $16.99, gives you a choice of two meats (beef brisket, pulled pork, apple smoked chicken or House-made Andouille sausage), plus one side.   Served on Texas toast with five barbecue sauces –  the spicy hot Red Smoke, Michigan Cherry Molasses, Honey Mustard, Poblano Pepper and Mississippi Mud – the  tastes are rich and delicious.  My favorites were the Mississippi Mud and Cherry Molasses – no hot bite, just flavor.   Both the pulled pork and beef brisket, which were said to be cooked 14 hours, were wonderfully tender.  The brisket had a lot of fat, however, so when ordering, specify a lean cut (according to our server’s after-dinner advice), otherwise, you’re apt to leave about a third of the portion as throw-away trimmings.

The combo plate comes with a cornbread round, drizzled with honey.  My side choice – macaroni and cheese (yep, going for the carbs!) came in its own little casserole, had a thick
‘meaty’ noodle spirals, a good amount of cheese and a nice bread-crumb topping.  It was microwave hot – which obviously was how it was heated, so that was a little disappointing.  It also was a bit bland in flavor (I added salt and pepper), but still tasty.

My husband ordered the pulled-pork sandwich, which arrived on a hearty brioche bun. It was accompanied by sweet and crunchy bread and butter pickle slices and a way-too-tiny serving of coleslaw.

Red Smoke Barbecue has daily specials, a nice variety of draft beers ($5 for a pint; $6.50 for 22 oz.) and its $3 bottle beer specials during our visit were, uh, special, including the Cleveland -brewed Edmund Fitzgerald Porter, from Great Lakes Brewing Company and Chicago-based Goose Island Honkers Ale.   We opted for a couple of drafts. The Founder’s Porter was excellent, as was the Bell’s Two Hearted Ale. 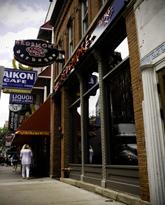 The atmosphere during our late-night meal was a bit conflicted – Saturday night football on the big screen was ‘overdubbed’ by Jimi Hendrix on the sound system.

I wondered how this modern joint would fit the authentic old-time mix of Detroit’s Greektown, and it works.  It’s great to have a nice barbecue option, with a kitchen open until 1 a.m. on weekends.

One Response to “Red Smoke Barbecue”