When the Jack Nicklaus golf course, The Bear, opened 27 years ago at Grand Traverse Resort in Acme, Michigan, it was heralded as one of the most difficult courses in the United States. 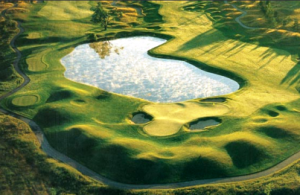 Hole No. 15 of The Bear at Grand Traverse Resort

Today, it still is considered one of the most difficult courses in Michigan, and worldwide, it will give most other tracks with a ‘difficult’ reputation a run for their money. Golf Digest ranked it 18th among America’s 50 Toughest Golf Courses.

The Bear has ample fairways and generous greens, but it also has numerous penalizing bunkers, forced carries, lots of water and plenty of trouble if you stray from the fairways.  The greens are vast, undulating and fast, and depending upon the pin placement, can present difficulties of their own.

The sculpted mounding that’s often characteristic of Nicklaus designs is part of the course’s incredible beauty and part of its challenge. From the tee, some fairways look like a mile-high aerial view of the Smoky Mountains…bumps, ridges and dramatic shadows.  The bunkers are deep – and while you should be able to get your ball out fairly easily, thanks to the soft, predictable sand, you may need a hand, a rake or your hands and knees to crawl out the sand trap yourself!  As a matter of fact, Grand Traverse Resort (GTR) put laddered steps in the bunkers around the 16thgreen several years ago.  I don’t know if they ‘lost’ any golfers to those traps, but truly, they take some physical strength to step out of unassisted. 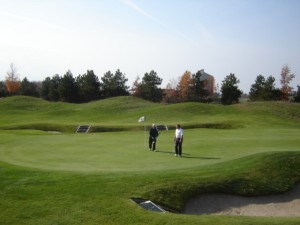 J. Mike DeAgostino (left) and Paul Bairley on the 16th green of The Bear

With four sets of tees, golfers have some options, but the yardage range between each is pretty narrow.  The course measures 7,078 from the tips, 6,601 from the blue, 6,122 from the white tees and 5,281 from the forward most, traditionally red, women’s, tees.   At most holes, I could walk the short yardage between the blue/white to the red tees while my male playing partners returned their drivers to their bags and drove up.  There’s literally not much advantage afforded to the red-tee hitters on most of the holes.  So while playing from the reds, an average golfer may surpass or land evenly with the longer ball hitters who are teeing off further back, but once there, he/she’s playing the same course, which makes it extra challenging for the shorter-distance hitter.

Accuracy is also rewarded, and required, on The Bear.  At a couple of greens, a deep pot bunker aligned behind the flagstick awaits the ‘almost’ accurate shot.  To someone like me, who ‘almost’ plays consistently respectable golf, that can feel a bit cruel.  Although I had my share of miss-hits on and off fairways, I lost a lot of strokes on and around the green – the mark of a true, average golfer!

I’ve played The Bear three times:  once on a bitterly cold day, which required use of my big red golf mittens between shots and a sip of brandy every few holes to ‘stay warm’; the second time, with fellow media as the Bear celebrated its 25th anniversary; and this last time, on a beautiful autumn day in northern Michigan, with my husband, Paul, and GTR Public Relations Manager J. Michael DeAgostino.

Everytime, The Bear gobbled me up and spit me back out, but not so with my playing partners.  Better golfers than I, they worked hard, had fun, but stayed focused on their game – and they did well.   Pars, bogeys and a birdie or two.   In reality, I could have done better and should have done better, but I let The Bear get the better of me. 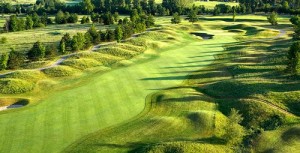 Jack Nicklaus' use of mounding and contours along The Bear's fairways make it visually exquisite and add to the golf challenge.

Nonetheless, I love that course.  It is a test of golf like few others, and a helluva great place to spend a beautiful afternoon.

My advice for conquering The Bear?

1)   Be humble, but not intimidated.  It looks worse than it is.

3)   Remember, getting yourself out of the bunker is often harder than hitting your ball out.

4)   A well-played lag putt is a beautiful thing.

5)   And, even Jack would be challenged by his course.

Finally, know that it will be history in 18 holes, and while you may toss out a few expletives along the way, you’ll miss The Bear when you’re done.