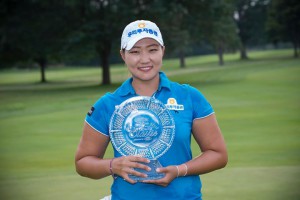 Michigan has long been known as  a leading golf state, and days like today, (Sunday, Aug. 10) — a beautiful, sunny &  hot, blue-sky day with two great LPGA events underway  — make it easy to see how Michigan has earned its well-deserved golf reputation.

At Blythefield Country Club in Belmont near Grand Rapids, the Inaugural Meijer LPGA Classic presented by Kraft, gave Mirim Lee her first LPGA victory after the second hole of a sudden death playoff against Inbee Park. It was a successful first for Meijer, Blythefield and Lee.

After both players exchanged pars on the first playoff hole, Park lipped out her 20-foot birdie putt on the second playoff hole. Lee, who shot a 2-under 69 in Sunday’s final round to earn her way into the playoff at 14-under-par 270, then sank her five-foot putt to become a Rolex First-Time winner. Suzann Pettersen finished one shot out of the playoff after shooting a 2-under 69 to finish at 13-under. 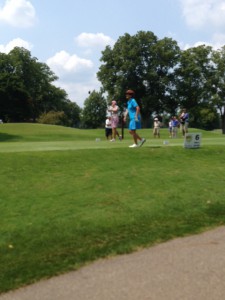 Donna Caponi heads down the fairway after Elaine Crosby’s tee shot at Country Club of Jackson at the Wendy’s Charity Challenge.

At Country Club of Jackson, Rosie Jones won in a playoff against Nancy Scranton after the two ended regulation play tied at -3 in the Wendy’s Charity Challenge. The one-day, 18-hole event hosted 23 LPGA Legends Tour senior players including Pat Bradley, Jackson’s own Elaine Crosby who took  at took third at 2 under par, Cindy Figg-Currier and Barb Mucha. 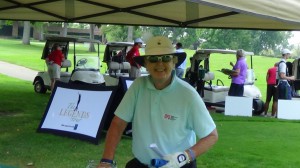 The only downside to having both events within 150 miles of each other at the same time was the resulting sparse attendance at the Legends event while crowds flocked to see the LPGA Tour players at the final round of the Meijer Classic. But the senior women clearly took that fact in stride as did the gallery, and CC of Jackson was a gracious and first-class host for all.

While I marvel at Michigan’s hosting of two LPGA events on the same weekend, Sweetgrass Golf Club and Island Resort in Harris, near Escanaba in Michigan’s Upper Peninsula  also must be recognized for its third consecutive year as host of the LPGA Symetra Tour in June. 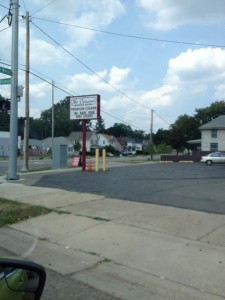 Michiganders clearly have a special place for women’s golf in their hearts…well almost all.  This smoke shop in Jackson advertising ‘golf cigars’ must have missed the memo!