The Descent Into Paradise: So what if it’s a three-flight journey, this is my first trip to Hawaii, and to the lovely island of Kauai for a fistful of golf rounds. Say what, the initial flight is late? And therefore I missed the connection? Now I have to spend the night in a flea bag airport motel in Honolulu, therefore arriving a day late? Excuse me, now I’m here but my luggage and clubs are not? And therefore I have to jump into the middle of a round in mid-day heat with by now fairly rank and humid clothing, facing the iconic par-3 thirteenth at Kauai Lagoons with rentals? 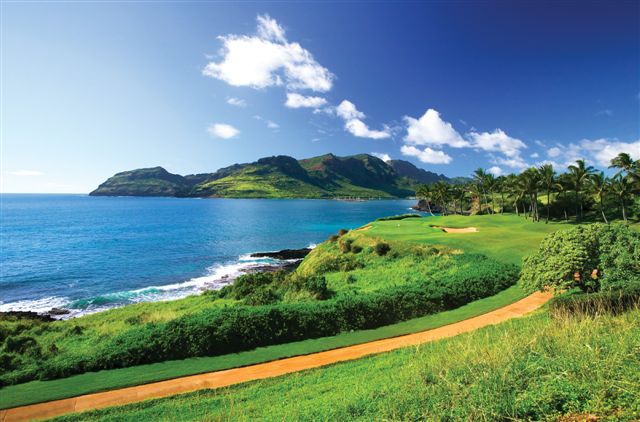 The Kauai Lagoons thirteenth, but soon to be the Kiele Moana fifth

And you’re asking why I promptly dump the shot into the Pacific? Could it be the thought of having to borrow underwear from my fellow travelers, since my luggage will only arrive at the airport the day I depart? Might as well ask why I want to go back and take that shot over!

Here at The A Position we’re given a topic to address (or not) each month for “The A List” feature in about 150 words, and this month we were asked to write about “Our Worst Golf-Travel Experiences.”

The context was important to note–that as golf writers, we’re basically spoiled rotten, traveling to the world’s greatest golf destinations on someone else’s dime, suffering through great meals, spa treatments and golf on top of golf. Who are we to complain? As a species, golf writers are rarely showered with sympathy. But as my comrades point out here, sometimes it was the trips that were rotten, if not out and out dangerous. 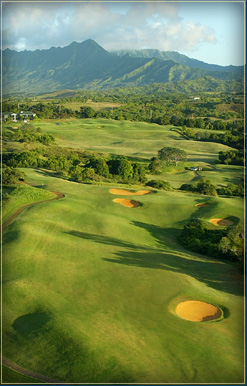 In the face of machete-wielding thugs, my grievance was downright mild, and directed at no one but fate–and the airlines, of course. It wasn’t my first or last missed connection, nor the only time my luggage and clubs went astray. So far in my golf-traveling life, knock wood, both have always arrived–eventually.

A trip I once took to Mexico was more costly, since while I was eating dinner alfresco in Playa del Carmen my camera was stolen right off the chair I’d looped it over, and presumably by a cadre of seemingly charming youngsters who had stopped by to serenade us as we ate. Some serenaded us; others made off with the goods.

And luckily, I’ve never been sick abroad, although I once returned home from Scotland, of all places, with a nasty stomach virus. (Could it really have been the Lanark Blue Cheese?)

I still have a pair of loaner underpants from one of my generous golf-writing buddies on that Kauai trip, a sort of wry souvenir. He’s never asked me to return them for some reason.

I’ve been back to Hawaii since, and all went swimmingly. But I’ve never returned to Kauai. I’d like to, since other than my ongoing discomfort on the trip, it was splendid in every way, particularly the golf way. Among golf courses in Hawaii, there can be no greater collection than on Kauai–Poipu Bay, Puakea, Makai at the St. Regis Princeville Resort, to name a few, and the Prince Course, a Robert Trent Jones II golfing profundity that is currently closed for renovations until October.

Kauai Lagoons has been getting a work-over too, from the Golden Bear himself. When Nicklaus completes phase one of the major course renovation now going on in May of this year, the iconic thirteenth hole mentioned above will become the fifth hole of the renamed Kiele Moana course.

What I could do there with my own clubs, in my own clean underwear!