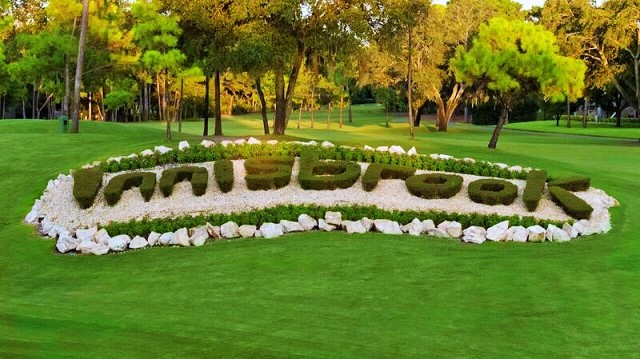 [Apr. 28, 2021–With the PGA Tour Valspar Championship rolling into Palm Harbor, Florida this weekend, thought I’d roll out this piece which first ran in 2018.]

I learned all I needed to know about the Innisbrook Resort in Palm Harbor, Florida, a half hour after I arrived, having quickly headed for the huge Loch Ness Monster pool, taken a few quick runs down two water slides and then installing myself in a hot tub large enough to hold a Rotary meeting.

There was a gathering of sorts going on, a group of about 20 Chicagoans soaking away the day’s golf rounds with a few beers in hand. Mostly electricians and contractors, the group had been coming to Innisbrook every year for 22 straight years. On one of the many shuttles that eliminate the need to drive around the 900-acre property I met two other golfers who had made Innisbrook an annual vacation for seven straight years. They didn’t sound like they were from Chicago.

“You came from Ireland, one of the world’s most desirable golf destinations, to play here?”

“Oh, we love it here,” said the Irishmen, conceding that the weather only added to the charms the resort held for them. 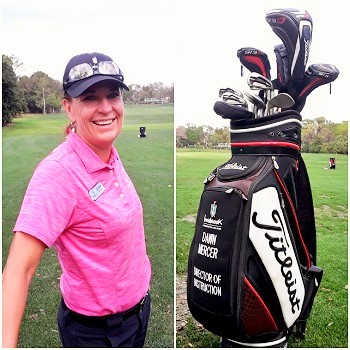 This sense of effortless loyalty extended to the employees I came to meet, ones who have worked at Innisbrook for 15, 20, or even 30 years, like the director of golf instruction, Dawn Mercer.

Had he had the decency to live a little longer, I might have met Innisbrook’s master of longevity, Larry Packard, who designed the resort’s four courses and lived on site for forty years. But Packard had the temerity to die four years ago, at the age of 101.

He lives on at Innisbrook in spirit and substance. Packard is credited with working on 600 courses worldwide, roughly 350 of his own designs and some level of involvement in about 250 others. What some say is his best work is right here, the Copperhead Course, which the PGA Tour tussles with on an annual basis.

This year, three years after the course had a complete revitalization, the Valspar Championship glittered with stars the likes of Rory McIlroy, Justin Rose, former winner Jordan Spieth (2015), who in the first two rounds played alongside a well-known chap making his tournament debut, Tiger Woods. 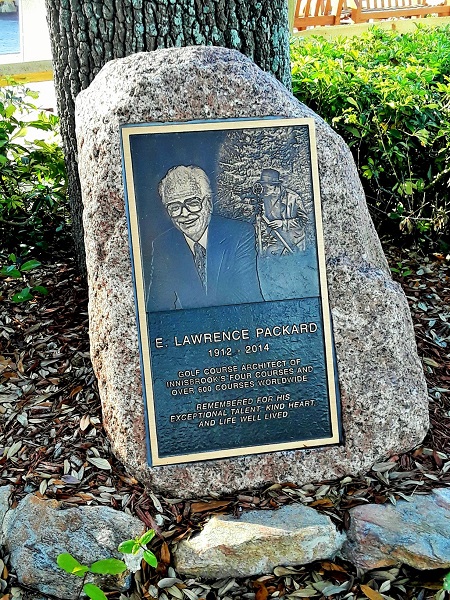 It might have been enough to unnerve the defending champ, Adam Hadwin. Yet he made the cut handily, while both Spieth and McIlroy slammed the trunk on Friday, presumably cursing Packard’s spirit. Woods, meanwhile, was tied for second after three rounds, and we can imagine him staring admiringly at the Larry Packard plaque near the start of the Copperhead course.

Packard was the president of the American Society of Golf Course Architects when the original owners of Innisbrook gave him the commission to build its courses. The first, the Island Course, opened in 1970. Many of the vacationers I ran into said the Island was a tougher course than Copperhead. That’s true up to a point. There’s no question that the fairway corridors are tighter. But the course is rated higher only from the longer tees. 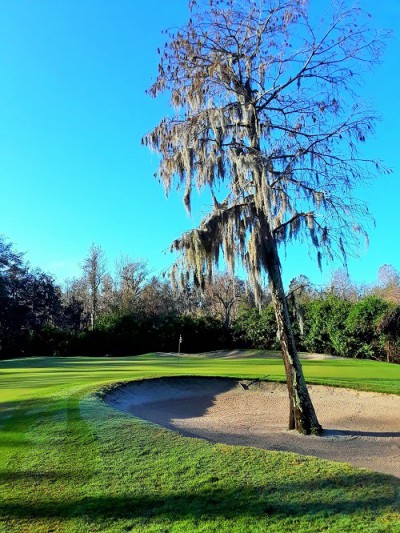 Play from the 6,139-yard white tees and the Island course has a 130 slope rating, whereas the Copperhead whites, 6,243 yards, clocks in at a hefty 137 rating. I fared slightly better on the Island from the whites, but I also played Copperhead fewer than two weeks before the start of the Valspar Championship, and steering a ball into three-inch rough was hardly conducive to low scores. It wasn’t even conducive to finding your ball. And the pros were playing the par-71 course at 7,340 yards.

Copperhead opened in 1972, the current North and South courses opening between the two headliners. None of them spring chickens, and indeed the resort had become long in the tooth and falling into bankruptcy when Sheila Johnson took the reins in 2007. Johnson made it a key part of her Salamander group of resorts, and began pouring millions into a seemingly endless series of renovations to every part of the multi-faceted resort.

There’s a lot here, from a world-class tennis center, six pools, a salon and spa (I can attest to the efficacy of the golfer’s Muscle Melter massage), a nature preserve, and a variety of dining options, including Packard’s Steak House. Larry Packard’s ASGCA plaid jacket is framed behind glass here. He was still wearing it when holding forth at the restaurant on his 100th birthday: 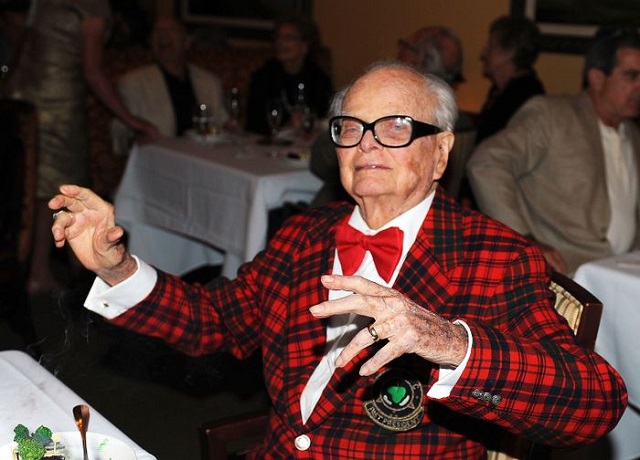 The cake served that night looked suspiciously like the hole outside my room balcony, Copperhead’s fourteenth. 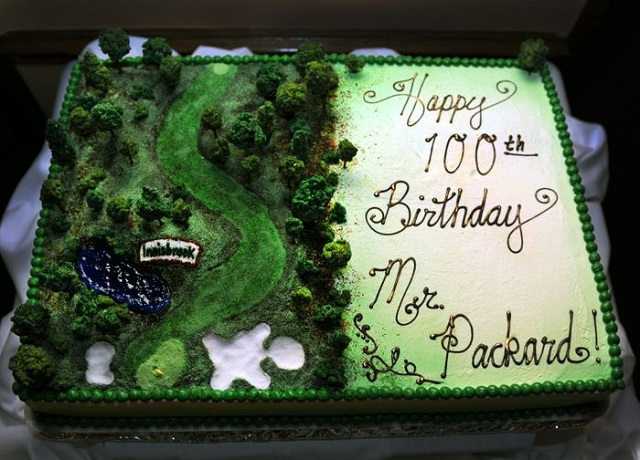 It’s one of Packard’s signature hole templates, a par-5 double dogleg, and it looked a lot tougher to digest than the cake. (As it would so prove.) 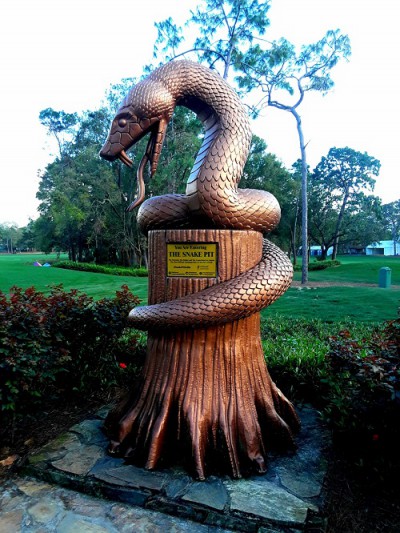 Much is made of the three finishing holes, the Moccasin, the Rattler and the Copperhead, collectively called The Snake Pit, with a much-photographed reptilian statue near the sixteenth tee. It’s not unlike the three-hole Bear Trap at PGA National, where the Honda Classic was just held, or other series of nicknamed holes (Amen Corner at Augusta National perhaps the most well-known) that can decide a tournament.

Indeed, at the 2017 Valspar Championship Patrick Cantlay bogeyed the final hole to seal the victory for Adam Hadwin. With two long and tough par-4s sandwiching a long and tough par-3, you don’t need to be suffering from ophidiophobia to feel a little uneasy entering The Snake Pit. The sixteenth usually plays the toughest, a 475-yard par-4 doglegging right around a hole-long pond. I managed to bogey this one from 376 yards, but was sucking out poison after seventeen and eighteen.

It should make for an interesting final round at this year’s Valspar Championship, or any round for visitors to Innisbrook, whether for the first time, or the 23rd year in a row.