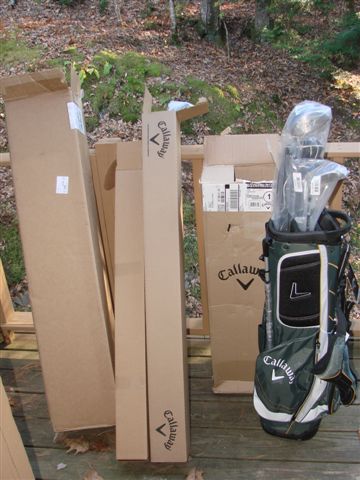 Whenever I find myself growing grim about the mouth; whenever it is a damp, drizzly November in my soul; whenever I find myself involuntarily pausing before coffin warehouses, and bringing up the rear of every funeral I meet; and especially whenever my hypos get such an upper hand of me, that it requires a strong moral principle to prevent me from deliberately stepping into the street, and methodically knocking people’s hats off–then, I account it high time to get a new set of golf clubs.

All right, profound apologies to Herman Melville, but it was a damp, drizzly November day in Vermont, and I was grim enough about the mouth, when I noticed that UPS had left a few telltale packages at the door.

As I tore into the boxes, unwrapped the clubs and started to put them into the bag, my wife snapped off this picture, which looks anything but grim. Appears more like a genuine S-E grin starting there. 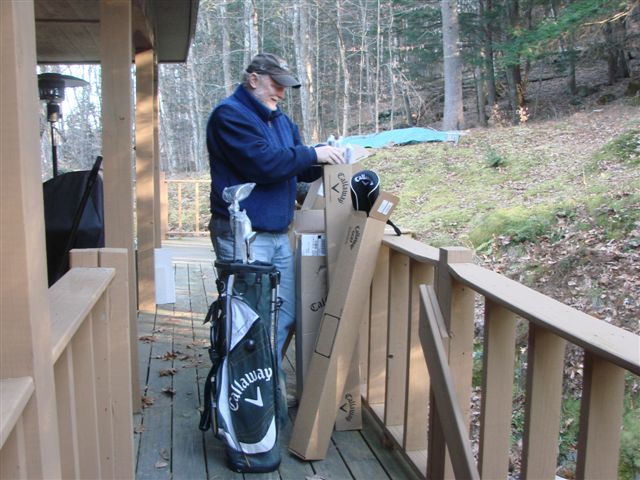 Well, I knew the clubs were coming, since I’d been fitted for them two weeks before. But the Callaway Hyper-Lite stand bag was a happy surprise, since my old PING Hoofer has reached a shaky antique status after long and noble service. It has earned a period of honored rest in the garage before I find someone to give it away to. 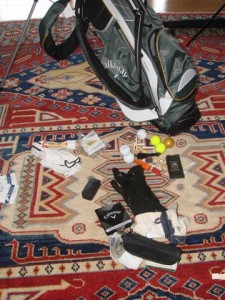 The old bag was bedizened with tags from courses I’d visited. I transferred but one for ID purposes, and I was ready to go.

Making the switch to a complete set of new clubs is likely to be something more of a shock. The old set was a bastard child collection no doubt, clubs from TaylorMade, Tour Edge, Mizuno, Bobby Jones and a mid-weight Heavy Putter. 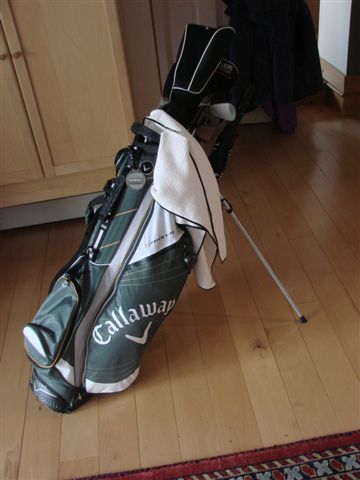 The new club selection is the same: driver, three wood, five wood (RAZR); three and four hybrids and five through sand wedge irons (RAZR XF). But except for the putter, I’m all Callaway now.

A combination of the lousy weather and a back problem will keep me from swinging the new sticks, alas, until the Golf Road Warriors tee it up Tuesday morning at Troon North in Scottsdale.

I’m not quite sure how things are going to work out with another sponsor, Grow the Game Golf, which works with smart phones and a web program to provide instant scoring and live leaderboards. I have a sinking suspicion that my scores may be broadcast throughout cyberspace right after each triple bogey. This may not make me or Callaway very happy.

But a Golf Road Warrior knows no fear and perhaps less sense, so what the hell. I wish I could say all bets were off, but I think my fellow Warriors have something else in mind, so let the voyage begin.

Previous: “Let There Be Callaway”
Next: “TAP Beers(s) of the Week: Golf Road Warriors Scottsdale”