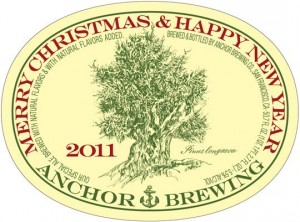 As it did with other withered brewing traditions in the country in the last quarter of the last century, San Francisco’s Anchor Brewing Co. stepped in, or up, to breathe new life into them. One such was the notion of brewing a special beer around the Christmas holidays.

Now virtually every brewery in the land, and worldwide for that matter, puts out some kind of holiday ale or winter warmer, usually a strong or spiced or in some way out of the ordinary brew. I went on about this in a piece last year, noting a few others as well as Anchor’s. 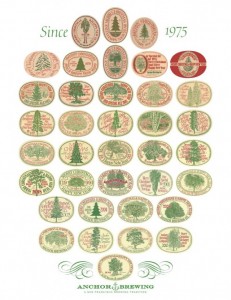 But back in 1975 when Anchor brewed its first Our Special Ale, there was virtually nothing similar on the landscape. Fritz Maytag and his crew look positively visionary in retrospect.

Anchor continued the custom annually, supposedly varying the recipe each year, though keeping the brewing details close to the vest. One early version became part of the regular portfolio, however, as Liberty Ale (day-to-day one of my favorite beers).

The company definitely varied the label from year to year with some kind of tree–either stylized or actual. For the arborists in the audience, this year’s specimen is the Bristlecone Pine, and that’s Pinus longaeva for the sophomores in the crowd.

The company produced a nice little video about the whole magilla this year, so why not trot it right out?:

The beer is in its 37th iteration, and I can’t say that I’ve had them all. I barely knew Anchor existed in 1975. But I’ve had most at least since 1988, the first Our Special Ale bottle in my collection. 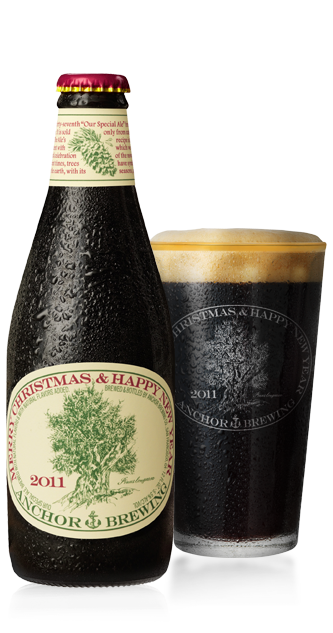 The beer is always a welcome sight when it appears in stores each November, and not buying at least a six-pack is virtually unthinkable.

Though the brewers won’t say what’s in it, I’ve suspected some kind of spruce adjunct for quite awhile now, or maybe even spruce tips. In any case, the ale is a spicy concoction with clove and nutmeg notes, and its piney aroma in a complex weave of hops, spice and malt all streaming out of the glass.

The beer is nearly opaque, with mahogany hues when held to the light. The flavor delivers all that the bouquet promises–sweet, tangy, full, well-bittered.

The spruce character seems somewhat less aggressive to me than in years’ past, which I think is a good thing. The beer has tended to taste as though it’s straight from the forest, maybe a stand of Bristlecone Pine. It still tends to summon the image of a Christmas tree. And, since ‘tis the season, all is well.