In the middle of May, 1659, the General Court of the Massachusetts Bay Colony issued the following order:

For preventing disorders, arising in several places within this jurisdiction by reason of some still observing such festivals as were superstitiously kept in other communities, to the great dishonor of God and offense of others: it is therefore ordered by this court and the authority thereof that whosoever shall be found observing any such day as Christmas or the like, either by forbearing of labor, feasting, or any other way, upon any such account as aforesaid, every such person so offending shall pay for every such offence five shilling as a fine to the county.

The Puritans were concerned that the more bacchanalian aspects of medieval winter solstice celebrations were besmirching the Lord’s birthday, and it would be best to nip it all in the bud. The specter of the motherland, where Christmas revelers were wassailing–drinking spiced ales, mulled ciders and the like–wouldn’t do in the New World.

Luckily, it didn’t work, although the order amazingly stayed in effect until 1681. (If the law of the land today the sheer volume of five shilling fines would handily take care of our national debt problem.)

Whether the solstice, Christmas, Chanukah or New Year’s, we like to celebrate, and the beer world is ready to oblige. The proliferating number of holiday ales and winter warmers is up to the task of keeping everyone’s nose as red as a cherry.

Santa is not partial only to cookies and milk. In his tasty little volume, Christmas Beers (Universe Publishing, $19.95), author Don Russell unearths a 1959 letter to the big man found in the Rutland, Vermont Santa Claus mailbox: “Dear Santa: I’ll leave you a glass of ginger ale, and if you’re still thirsty, I could leave you two quarts of beer. Remember, my house is the one with the beer. Love, Cindy.”

Cindy may now be old enough to be collecting Social Security, but I hope Santa was good to her over the years. If she’s a beer fan, no worries. As Russell points out, what was once a trickle of holiday ales has become a virtual flood, all the more reason for merriment. And if ever a Christmas season gift seems to come pre-wrapped, brightly labeled big bottles of holiday beer are the ideal specimens. I’ve never known such an offering to be poorly received. I know (hint alert) I never tire of them.

Naturally, the joy of the season needn’t be confined to Christmas celebrants. The Shmaltz Brewing company’s annual Chanukah beer, Jewbulation, is from all accounts a powerhouse of an offering, but I haven’t been able to light one up yet.

Nor have I found the beer modeled after a Scottish suet fruit pudding from the Orkney Brewery, Clootie Dumpling. But there’s always next year. 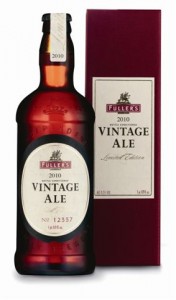 We’ll consider a few festive brews over the next few weeks, with this six-pack for starters:

1. Our Special Ale 2010 (Anchor Brewing Co., San Francisco, CA, 5.5% ABV): In the U.S., Anchor revived the custom of brewing special holiday beers in 1975, annually varying the recipe and label. And now you can buy ‘em by the magnum. (anchorbrewing.com)

2. Santa’s Private Reserve (Rogue Brewing, Newport, OR, 6.3% ABV): One of the few beer bottles of use if the weather knocks the power out, thanks to glow-in-the-dark labels. There’s plenty of flavorful wattage inside, too, brewed with five different malts, three different hops, and a partridge in a pear tree. (rogue.com)

3. Fuller’s Vintage Ale 2010 (England; 8.5% ABV): The active yeasts in bottle-conditioned ales like the Fuller’s Vintage permits cellaring for five years or more, for those who can wait that long. Better plan, buy enough to chart the changes in the maturing beer from year to year. (fullers.co.uk) 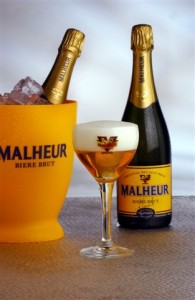 4. Infinium (10.3% ABV): Fill the glass flutes with this collaboration between the Boston Beer Co. (of Samuel Adams fame) and Germany’s venerable Weihenstephan Brewery, which was ready for uncorking last month. It’s a beer, but the golden, fruity, spicy concoction is New Year’s Eve-worthy in its champagne-like character. (samadams.com)

5. Malheur Brut (Brouwerij De Landtsheer, Belgium; 11.0% ABV): The champagne of bottled beers is Miller Genuine Draft only in ad copy. This Belgian sparkler claims to have been the first real méthode champenoise beer in 2001. Put it on ice and power into the new year with its slightly stronger sibling, Malheur Dark Brut. (belukus.net)

6. Our Brewers Reserve Grand Cru (Sierra Nevada Brewing, Chico, CA; 9.2% ABV): This is the final offering in the year-long celebration of the brewery’s 30th anniversary, and it is both a fond look back and a bold step forward. I’d say it is one beautiful beer, but it’s actually a blend of the flagship Pale Ale, the annual Celebration Ale, and some oak-aged Bigfoot Barleywine-Style Ale. Let the fireworks begin. 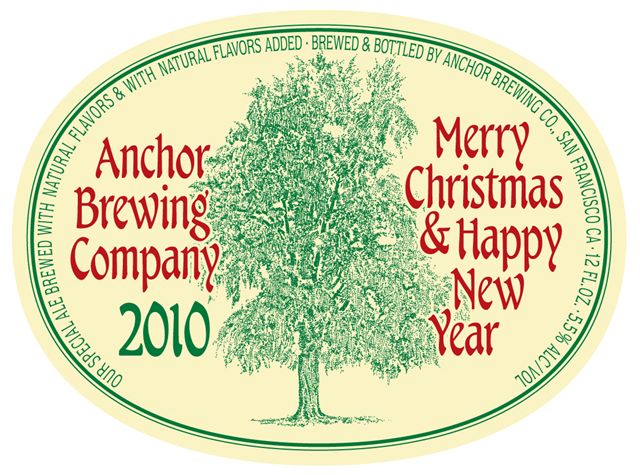