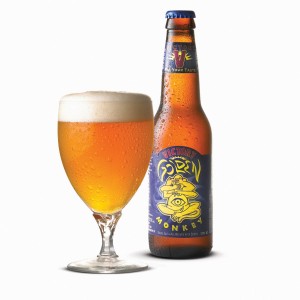 As mentioned last week, we’re filling up a fantasy 12-pack of beers from brewers who will be represented at the May 22, 2010 Brattleboro Brewers Festival. This, our second beer, will be poured at the festival, although I’ve been pouring it quite a bit lately anyway, ever since Victory began distributing here in Vermont in late December. 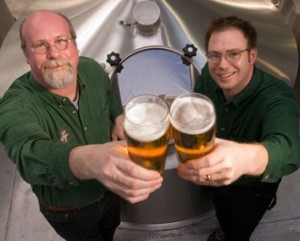 The brewery has been operating since 1996, although the genesis goes way back to when co-founders and owners Ron Barchet and Bill Covaleski met on a school bus in fifth grade. They’ve had a good ride ever since.

It seems obvious that the model for Golden Monkey is Duvel, a beer which the late Michael Jackson dubbed a world classic, although it, too, failed to crack the NYT panel’s top ten. (What’s wrong with them?)

Both beers are indeed golden, looking for all the world like unexcitingly tame pale lagers. Both are ales, both are anything but unexciting, redolent of spices and fruit, particularly pear notes. They’re peppery and effervescent on the tongue, refreshing and delicious, and both will cut a drinker off at the knees if not mindful of their hidden wallop. One 12-ounce bottle is enough to begin working some magic. If I had a Duvel on hand I would taste the two side by side for purposes of research. Then I would take a nap.

Soldiering on with just Golden Monkey is not a hardship. Victory calls Golden Monkey a tripel, perhaps because of the spices it adds, or perhaps, as Will Doak, my man on the ground in Pennsylvania puts it, to make a play on the monk in monkey:

“I think the flag for Golden Monkey, inside the pub, says something about enlightenment. But after a few Golden Monkeys, I’d be your man on the floor.”

Will, who lives ten minutes from it, reports that, “Business at Victory’s renovated brewpub is booming. It’s hard to find a parking place.” If lucky enough to find a space and get inside, “It’s hard to hear your wife, even in your good ear.”

His wife, Andrea Botts, is also a beer nut, making Will lucky in love. “Andrea went through a long phase of drinking Golden Monkey, but has moved on; she’s now quite a fan of Victory’s Fest.” 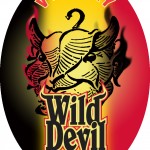 There’s certainly plenty to move on to. Victory probably cycles through 30 different beer styles in a year’s time, though some are available only at the brewpub in Downingtown. But along with typical year-round beers like HopDevil, Hop Wallop, Prima Pils, Storm King Stout, are seasonal and specials that take no prisoners.

Among those birthday bottles my brother picked out for me were Victory’s WildDevil and V-Twelve. The latter is a Belgian-style strong ale that tops 12% ABV, and which I haven’t had yet since I don’t dare drink it alone. The WildDevil is the company’s HopDevil fermented with a Brettanomyces yeast strain (one strain for the draft version, three strains for the bottled version). Here it seems obvious that the model is Orval, a Belgian Trappist classic. And again, the homage seems righteous.

4 Responses to “TAP Beer of the Week: Victory Golden Monkey”