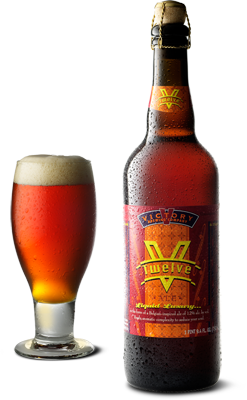 When in Pennsylvania, drink Keystone State beers. My friend and MOTO Research Team member Prentiss Smith was afraid there wouldn’t be any suitable brews on hand for me when we arrived Friday night for the opening bash in the weekend festivities celebrating the marriage of his son, Prentiss Smith Jr., to Lauren Katz, so he went out and somehow managed to score a miscellaneous six-pack of local beers. This was no easy task, considering the state’s bizarre laws, which usually require buying beer a case at a time.

The rehearsal dinner was as sumptuous a gala as many weddings themselves, a Mexican-themed evening at the home of the bride-to-be’s parents, Connie and Sam Katz in the Chestnut Hill section of Philadelphia.

Sam Katz made three unsuccessful runs for Mayor of Philadelphia, each time as a Republican, though he began his political life as a Democrat. He switched parties more to gain a place on the ballot than because his convictions had changed, and the rumor is afloat that he is now contemplating another shot at the post, this time as a registered Democrat. But he gamely refrained from discussing politics during the wedding weekend.

The only hitch in the program was that recent torrential rains had created massive traffic tie-ups, and a bus bringing most of the out-of-town guests from a downtown hotel–normally a short ride–took about an hour and a half, delaying the festivities and the arrival of the prized six-pack. But I dallied pleasantly enough with the Negra Modelo on hand. 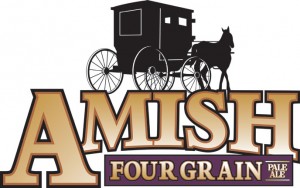 Prentiss had chosen wisely, with beers from the Lancaster Brewing Company, Victory, Yards, and Stoudts. With a massive cold, I figured I’d be lucky to taste anything, so I made my choices based on whimsy and bottle art. Who could resist something called Amish Four Grain Pale Ale? The label suggested, perhaps redundantly, that this Lancaster Brewing Company beer was “Brewed Naturally–Without Preservatives.” It said nothing about the use of electricity or distribution of the beer via motor vehicles.

The beer does include oats, rye and malted wheat along with malted barley, comes in at 5.3% ABV, is a deep copper, and I was able to discern a toasty character, and some floral hop aroma thanks to dry-hopping with Saaz hops. 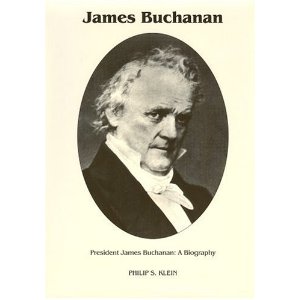 Lancaster was home to our fifteenth and, some say, worst President, James Buchanan. I’m halfway through his biography, as I continue on in my self-assigned Presidential reading project. This one, by Philip S. Klein, is not badly written, but I’m still yearning to get to the next President–it’s been a bit of dry run of late with Taylor, Fillmore, Pierce and Buchanan in numbing sequence.

Perhaps with that in mind, my next choice was one of Yards Brewing Company’s Ales of the Revolution, General Washington’s Tavern Porter. The others in the series are Poor Richard’s Tavern Spruce Ale and Thomas Jefferson’s Tavern Ale, all three said to be based on recipes our founding drinkers used themselves to concoct brews, though whether George, Ben and Tommy did any of the actual brewing themselves is open to historical debate.

The Tavern Porter label claims the General had the recipe brewed, “to satisfy his thirsty field officers,” but there’s no debating that it’s a sturdy dark pleasure, coming in at 7% ABV, with a strong hint of the molasses used in the brewing. 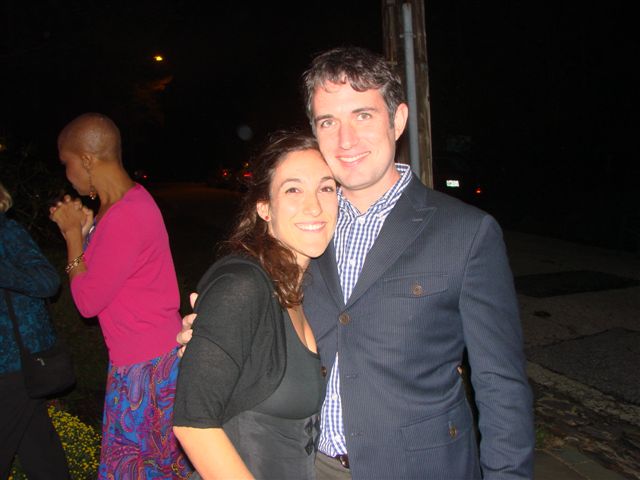 Prentiss Smith Jr. and Lauren Katz, the night before their wedding

We stayed with old friends Will Doak and Andrea Botts, who live appealingly close to Downingtown, home of the Victory Brewing Company. As mentioned in the entry for Victory’s Golden Monkey back at TAP Beer of the Week 10, Will and Andrea are accomplished beer nuts in their own right, so there was no question that we’d be visiting the brewery on Sunday.

It turned out that Victory was sponsoring a fall festival that day right in downtown Downingtown, packing the streets with food and craft booths, and the new Victory Brewpub On Wheels, basically a mammoth rolling beer dispenser. The B.P.O.W. is the subject of the company’s first-ever commercial, and a funny one at that, showing what might happen if the B.P.O.W. made the rounds of the neighborhood like an ice cream truck. 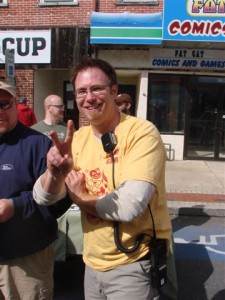 The cast of the commercial is made up of employees or friends of the brewery, including co-founder and owner Bill Covaleski, playing the crucial part of Man w/Suitcase.

Bill was trying to direct some of the human traffic in the streets the day of the festival, and I reintroduced myself as the guy he sat with in the Flat Street Pub one night during the Brattleboro Brewers Festival in May. No need–he even remembered I was drinking Victory Hop Devil that night, an impressive feat of suds recall.

The overflow street crowd had the same idea we did–go over to the brewery and brewpub. So we had to wait a bit for a bite and some beers, but that gave us time to choose our sampler beers from the bulging list available. 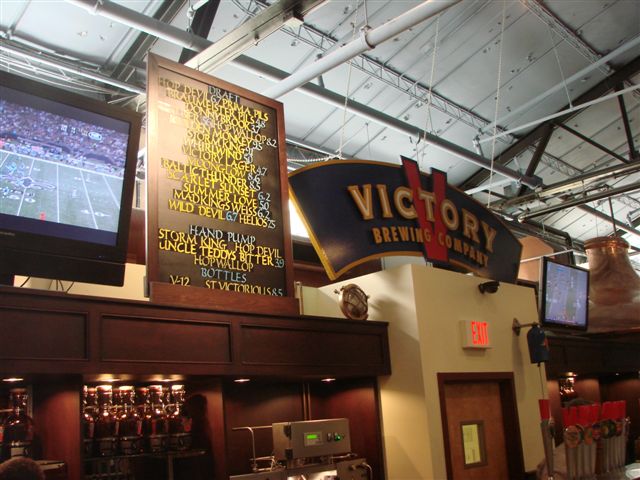 Once home, I decided it was time to tackle the V-12 my brother gave me back in January. If the Golden Monkey is a triple, the V-12 is a quadruple or maybe a quintuple. It’s big.

But considering the 12% ABV at bottling (it’s liable to keep climbing as a bottle-conditioned beer), it goes down like the Monkey–all too smoothly, with warmth but little alcoholic burn. There’s a vigorous malt backbone and an energetic play of flavors–spicy, fruity, yeasty. I’m sure I was lucky in that I had help drinking it, but it was disappointing nonetheless when I poured out the last of it.

The label noted I had a March 2, 2009 bottling, with the recommendation that I drink it before five years had elapsed. Done.