I’ve taken a few days off from writing, if not drinking, after the rush to finish up the 12 Beers of Christmas on the day itself. Like last year it was both fun and exhausting to try and write up something cogent everyday while in the thick of the holiday frenzy, never mind succeeding. Maybe I’ll forget about that after 350 days or so and try again in 2014.

Thanks to those who have taken the ride; hope you enjoyed it. For those who didn’t dive in but would like to, you can start at the first, Anchor’s Christmas Ale, and work forward, or here at the last (and best), Dupont’s Avec Les Bons Voeux, and work backward. But there are also links at the end of each piece heading both forward and backward through the series.

The photo shows them all, except the Corsendonk, which I had on tap. There’s a Corsendonk bottle in the photo by way of a nod, but it’s not the Christmas beer. It is, however, the biggest bottle of beer I’ve ever had.

As mentioned, I never meant the list to represent any kind of ranking order or even a guarantee of good drinking; the beers were just twelve I picked up and went through one day after another, sometimes solo, sometimes with family assistance. As it turned out, my first pick was not one of my favorites this year, while my last was.

But they were all fine, fun and worth trying. For those who love ratings, I’d put as many as seven in the Splendid category, those from Dupont, Mikkeller, Mahr, Troëg, Victory, Sixpoint and Corsendonk. I’d throw Harpoon, 10 Barrel and Magic Hat into the Dang Good category. That leaves Anchor and the Géant brew in the Not As Good As I’d Hoped, But I’ll Have Another If Offered gulag.

Again, I had no particular plan in picking these twelve. It pretty much came down to—it’s on the shelf, I’ll take it. I left a lot of beers on the shelf I could have taken, true—Rock Art Mountain Holidays, Scaldis Noel, Samichlaus, Sebago Slick Nick—while grabbing a few extras: Cisco Winter Warmer, Berkshire Brewing Company Holidale, Sierra Nevada’s Celebration Ale (of course), and for Boxing Day, the Ridgeway Brewing Bad Elf and Criminally Bad Elf.

I’d not had most of these beers before, and will probably never have some again. The Magic Hat G-Thing was available only as part of its Winterland Variety Pak, and next year there will probably be something else. 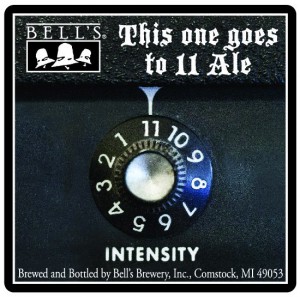 I did indeed add some Harpoon Craft Cider to their Winter Warmer, and as noted, it did indeed smell like apple pie. But that’s not necessarily a recommendation.

I do like the Harpoon Winter Warmer, which turned out to one of the few actually spiced beers on the list. Most of the others gave off spicy characteristics just through the particular hops and/or yeast employed.

Troëg’s Mad Elf Ale easily waltzed away with the High ABV Award at 11%. I was, only naturally, tempted to say, “This one goes to 11.” But it turns out that Bell’s Brewery of Michigan actually makes what they call an Imperial Red Ale named This One Goes to 11.

One to look forward to.