After yesterday’s abeyance we’re back in the land of spices, and big time. But the Jolly Traveler is something a little different, in that it’s a version of a shandy, even if the base is a wheat beer rather than a more traditional lager. And it’s not made with lemonade, lemon soda or ginger beer. But pomegranate juice? Yes. Lemon peel, orange, spices and “natural flavors” added? Plenty, yes. And at 4.4% ABV you could drink punchbowls of this stuff, which is a little like where it seems to have come from.

It actually came from the fertile mind of Alan Newman, who heads the Alchemy & Science division of the Boston Beer Co. (read Samuel Adams). Newman started the Magic Hat Brewing Co. (think of the apricot-laced #9) in 1994 in Burlington, Vermont, and Alchemy & Science is based there. But The Traveler Beer Company products are brewed in Ohio or Pennsylvania. All this information is right on the label, so the company isn’t trying to be “crafty” in the recent and evil connotation of that word in craft brewing circles.

It’s just trying to offer something different, although maybe not so different from the Summer Shandy Millers/Leinenkugel put out to great success. Recent summers have seen a marked increase in the number of shandys or radlers in the marketplace from the likes of Harpoon, Boulevard, Widmer Brothers, Narragansett and Samuel Adams itself, plus imports from Stiegl, Hirter, Schöfferhofer and others.

This particular brew is a slightly murky ciderish amber with a moderate head, and a potpourri of a nose. All sorts of aromas spill forth—citrus, spiced apple, cinnamon, ginger, licorice (or is it red licorice?)–and cascade right unto the palate, a little like juicing a fruit basket. I’m presuming that’s pomegranate in the lead role. But it could be the natural flavors.

I can understand why this might appeal to those looking for a tart and refreshing beverage, relatively low in alcohol, especially if a long evening is ahead. Refreshing it is. But, I confess, shandys just really aren’t my thing, winter or summer. 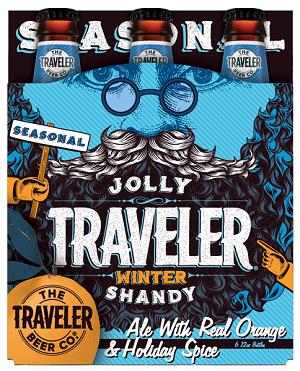 Shandys are a somewhat tougher sell in winter, which may be why the Jolly Traveler is also being touted for its use in cocktails, like the Holly Jolly Cherry:
>Fill a shaker halfway with ice.
>Add 1 oz. cherry brandy, .5 oz. scotch and two dashes Angostura bitters.
>Stir and strain into a chilled martini glass.
>Top with 3-4 oz. Jolly Traveler.
>Garnish with a cherry.

I was actually thinking of trying this, but I plowed too quickly through the samples that were sent my way. My bad.

My favorite aspect of the Jolly Traveler is the jolly artwork on the six-pack and label, of a bespectacled and bearded gent who may be particularly busy this time of year. But perhaps not. Maybe I’m confusing him with someone else. 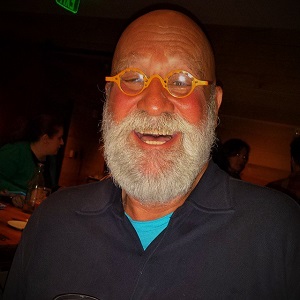